WASHINGTON (DTN) -- At a hearing Tuesday, Democratic members of the Senate Agriculture Committee focused on how Agriculture Department rural development programs can improve health care, elder care, childcare, and behavioral care, while Republicans focused on the impact of inflation on rural Americans, including their mental health.

"We all know a small business owner who sets store hours based on if -- and when -- they have someone available to take care of their young children or aging parents. So, it's a godsend for their growing business when their local government and neighboring businesses team up to build a new childcare center with the help of the USDA," Stabenow said.

Sen. John Boozman, R-Ark., ranking member on the committee, took a different approach in his opening statement. "Rural economic viability, a strong economic floor, is what is necessary to support a care economy," he said. "Federal policies and regulations can have an outsized impact on the economy of rural America. We have seen it time and time again, and we are seeing it right now.

"If we truly want rural America's families to have access to quality health care, childcare and elder care, then we must provide the stability and certainty necessary for our farmers and ranchers, and the businesses they support, to thrive.

"Unfortunately, the current economic and policy environment is far from stable for our rural communities.

"The economic headwinds facing Americans today are simply staggering, and rural America is taking a heavier hit: Inflation is the highest it has been in more than four decades at 7.9%. With half of the U.S. population under the age of 40, this is the highest inflation many have seen in their lifetime," Boozman said.

Boozman then listed the increases in food prices, gasoline prices and utility prices that have occurred since President Joe Biden took office.

Agriculture Undersecretary for Rural Development Xochitl Torres Small, a former House member from New Mexico, said: "The care economy faces a number of challenges -- federal and state reimbursement rates, workforce, affordable access, transportation to care facilities, and culturally competent care, to name a few. While the federal government works as a whole to tackle these issues, Rural Development's tools are focused on keeping care in communities, and keeping doors open. I look forward to working to tackle these issues and partnering with Congress to keep care in your communities."

Torres Small continued: "The phrase 'care economy' may sound general, but it is deeply personal to each of us." She noted the case of a woman with a troubled pregnancy who had to walk up a hill to get the level of Internet service needed to send her vitals to a hospital. During a question-and-answer session, Boozman thanked Torres Small for her service but questioned USDA's decision to emphasize higher levels of Internet service. Torres Small told reporters it is important to bring service to areas that have none but also to improve the service in rural areas. The pregnant woman needed better service to transmit her vitals, and students need better service so that they can see their teachers in Zoom sessions, she said.

Three witnesses invited by the Democrats -- two physicians and an education specialist -- testified about the needs in rural America.

Joseph Carrica, a descendant of Basque sheepherders who is CEO of Southeast Health Group in southeast Colorado, said he had used a Certified Community Behavioral Health Clinic (CCBHC) grant to embed an ag advisory board to create "a safe space in Rocky Ford, Colorado, where we offer free coffee, doughnuts and conversation two days a week. During conversations on weather, commodities, the increased price of fertilizer and diesel, bank loan payments, and how to deal with the end of legacy ranches and farms as children are not returning to take the operations over, mental health check-ins covertly happen."

Carrica said telehealth is also important "to accommodate those that have access-to-care issues, whether that is transportation, profound remoteness, or simply the fear of having your car or pickup seen in our parking lot."

Douglas Holtz-Eakin, a former director of the Congressional Budget Office who now heads the American Action Forum and was invited by Boozman to testify, took a different approach. He said, "No specific policies for the rural care economy can offset the negative impact of a poor macroeconomic environment."

The American Rescue Plan, which Congress passed with the encouragement of the Biden administration, has increased inflation, Holtz-Eakin said. Federal Reserve Chairman Jerome Powell has said that it will take three years to get back to the Fed's goal of 2% inflation. The Build Back Better agenda, now apparently defunct, would make the situation worse and make it impossible for the Fed to follow its schedule to reduce inflation, he said.

Republican senators pressed the Democratic witnesses to comment on the impact of inflation in their areas of expertise, but that did not result in very colorful statements.

Sen. John Thune, R-S.D., said he is frustrated "that we are not focusing enough on the challenges that rural Americans are facing with inflation."

Asked afterward why he had invited an economist rather than a rural development expert to testify at the hearing, Boozman said that Holtz-Eakin's credentials "are exceptional" and that he wanted to talk about the impact of inflation. Boozman said he does not want to create more programs dependent on deficit spending that is inflationary.

Stabenow pushed back on Holtz-Eakin's criticism of the American Rescue Plan, saying she could cite examples of people and businesses that it had saved.

Stabenow said the statements Holtz-Eakin made should be subject to debate. Coming out of the pandemic, Stabenow said, "I'm not surprised that our generation is now having to figure out how we put all these pieces back together and match them up." It's important to try to bring down the price of inputs, but that's not the only issue facing people who want to live in rural Michigan, she added, saying she wanted people to be able to stay in rural America.

"I've heard today from our witnesses that the care economy is important and needs to be supported as part of the whole picture," Stabenow said.

"Rural families' ability to access quality-of-life care is important, is key to economic prosperity for all of us," she concluded. 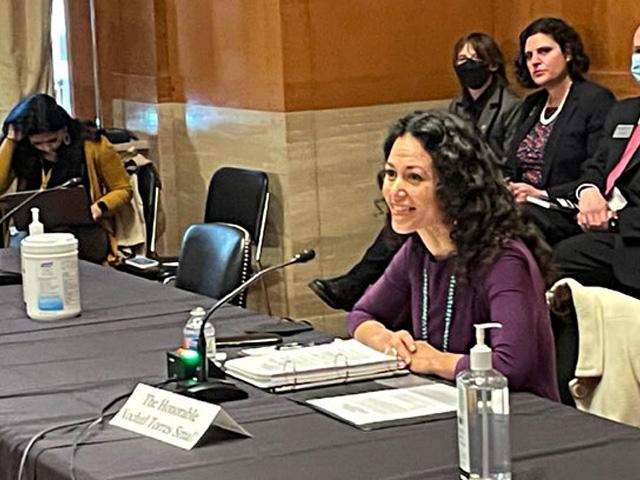