ADEL, Iowa (DTN) -- There are a lot of requests and needs filling lawmakers' ears with Congress gearing up in September for final passage of at least one bill with $1 trillion in infrastructure spending, and a raging debate over another bill with potentially $3.5 trillion on the line.

Highlighting the prospects for rural America, Rep. Cindy Axne, D-Iowa, brought in Rep. Cheri Bustos, D-Illinois, to Axne's district last week to stress that they are focusing on rural issues. Axne and Bustos co-chair the "New Democrat Coalition Rural Reinvestment Taskforce" and they kicked it off with meetings last week in Iowa, including an event with agricultural leaders at the fairgrounds outside of Adel. The focus of the task force is "to make sure that rural America gets its fair share at the federal level," Axne said.

"We're going to go through all of the fine details of the bill," Bustos said.

Bustos noted the House will take a final vote on the $1 trillion Senate infrastructure bill -- the "Infrastructure Investment and Jobs Act" -- on Sept. 27 as well. "We're not making changes on it."

That bill includes $550 billion in new spending with $110 billion directed to roads and bridges; $100 billion for the electric grid; $66 billion for both passenger and freight rail; $65 billion for broadband; and $50 billion for climate-change resilience. Those are some of the big-ticket items in the bill, but there are an array of smaller projects and carve-outs as well, such as $12 billion for carbon sequestration projects, which includes pipelines.

Pushing back on Democratic spending plans, Republicans on the House Agriculture Committee sent a letter on Sunday to House Ag Committee Chair David Scott, D-Ga. The GOP letter stated, "The public deserves a thorough and transparent process for any legislation of this size and scale being contemplated by House and Democratic leadership. Sadly, it appears as though our farmers, ranchers, foresters, and rural communities will get an unvetted and potentially harmful wish list of partisan priorities accompanied by an astronomical price tag," Republicans wrote.

The GOP letter added, "We fear the reputation of this committee has been tarnished" by House Speaker Nancy Pelosi, D-Calif., and others in leadership. Instead of bipartisanship, "this committee is being held hostage by party leaders who have zero interest in protecting the farmers, ranchers, and foresters that feed, clothe, and fuel this great nation."

In Adel, farm leaders highlighted their support for the Growing Climate Solutions Act, which passed the Senate with more than 90 votes earlier this summer but has not been taken up by the House. Bob Haus with Corteva Agriscience asked about the status of the bill in the House, noting Corteva has a program to incentivize farmers to embrace better soil health practices.

"They don't have to be Corteva customers," he said. "It's a voluntary, three-year program and we'll actually go out and find buyers in the market. So, we're the middleman trying to get our farmers to adopt these practices and to remunerate them."

Axne said House members support moving ahead with either the Growing Climate Solutions Act, or a similar bill. Still, the House Ag Committee has yet to take up a similar bill.

Tying that to the reconciliation bill, at least 63 agricultural, environmental and other groups last week sent a letter to Congress calling for funds to "advance climate friendly agriculture, food systems and equity." The groups called for a $30 billion boost in conservation programs; $5 billion for sustainable and organic research programs at land-grant universities; $3 billion for rural development projects in various areas; and $10 billion for debt relief for producers.

If the House Agriculture Committee doesn't inject language into the reconciliation package to boost carbon sequestration efforts, that will be a missed opportunity to move USDA conservation programs quickly in that direction.

Axne and Bustos also are trying to get language in the reconciliation bill that would exempt family farms and small businesses from the capital-gains taxes and $1 million exemption cap on stepped-up basis. Axne said she's not looking to extend the exemption for the wealthiest Americans.

When passing on the farm to the next generation, Axne said she and others don't want farmers to have to sell land to pay the taxes on capital gains. She said the same idea applies to small businesses across the country. Axne pointed out she had talked with Rep. Alexandria Ocasio-Cortez, D-N.Y., about the impact this would have for small corner business stores in areas such as the Bronx, New York, that have become "gentrified" in recent years and seen property values skyrocket.

"So, this is an issue across the country," Axne said. "I look at it as a Main Street issue, and we've got to get it fixed."

Axne added, "Farmers are land rich, and that's about it. It's not like there's just money gushing out everywhere. It's all in the ground, and dirt doesn't feed your family."

The challenge for rural Democrats is that the tax issues fall into the wheelhouse of the House Ways & Means Committee. Axne noted there are a lot of competing tax proposals being pitched by House Democrats.

"Let's just say there's a lot of competing factors right now in the Ways and Means Committee and what they are hearing from all of us who are coming in on specific aspects of the Build Back Better Act," Axne said.

Bustos also is leading the push in the House for higher blends of biofuels. Last week, she reintroduced the Next Generation Fuels Act, which would require auto manufacturers to ensure their cars coming out in the next five years and handle blends of up to 30% ethanol. The bill has bi-partisan support, but Bustos noted that to advance that bill would take support of the Biden administration and members of the House Energy and Commerce Committee.

The bill has strong backing from the National Corn Growers Association, and biofuel groups, but ethanol is caught between members of Congress who back the petroleum industry and the Biden administration and its allies who are pushing harder for the auto industry to build more electric vehicles.

Monte Shaw, executive director of the Iowa Renewable Fuels Association, said his group backs Bustos' bill, but in the short term, it would be critical to get Congress to fix the curveball thrown to ethanol earlier this summer after a federal appeals court threw out the Trump administration's E15 rule. 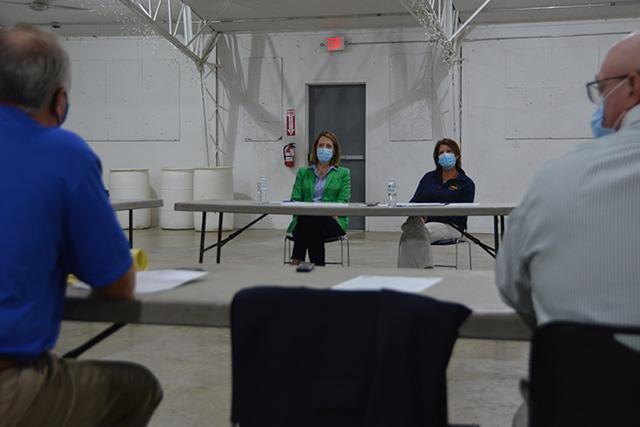