OMAHA (DTN) -- Farm labor, broadband and infrastructure, climate change and sustainability, and ensuring diversity in agriculture were among the biggest issues the president of the American Farm Bureau Federation and the CEO of Land O'Lakes see facing agriculture, beyond the immediate challenges tied to the pandemic.

In a conversation Monday during the American Farm Bureau Federation's online convention, Farm Bureau President Zippy Duvall and Land O'Lakes CEO Beth Ford said while the COVID-19 pandemic will be the biggest issue for the next several months, farmers see other policy demands and needs in 2021.

"The issues that were here before the pandemic will be here when we come around the pandemic," Duvall said.

Duvall maintains labor remains "the biggest limiting factor of American agriculture." Americans do not want to perform farm labor and current guest-worker programs are too cumbersome and too expensive, he said. Foreign guest workers also are not allowed to work year-round agricultural jobs such as in dairies. Duvall has repeatedly called for a legislative fix to the problem, but Congress has not been able to address immigration issues in several years.

"Immigration reform is going to be absolutely critical, and I've touched base with the Biden administration that we continue to put a voice to the fact that it's fine to talk about immigration reform for tech workers, but we need some farm labor because otherwise it constrains us."

The pandemic brought forward the critical nature of the food supply to Americans, Ford said, calling it a national security issue. The U.S. needs to ensure it is investing to establish a more sustainable food supply, she said. That includes focusing on technology, but immigration reform as well. Duvall added the "just in time" system in agriculture cannot afford shutdowns. Employees must be protected because shutdowns like those that happened with packing plants last spring back up the supply chains on the farms.

Ford said her conversations with both the Trump administration and incoming Biden team have focused on investment in infrastructure, including broadband, transportation and rural health care. She pointed to the challenges with rural medical care are tied to improvements in broadband to expand areas such as telemedicine.

"We've had so many rural hospitals that have shut down," she said. "So, it's hard to be productive in agriculture when you have to worry about whether you can get in to see a doctor, or if you have any kind of farm accident or any kind of issue."

"It's like electricity. It's like the 1930s rural electric initiative where we have to have that capability so that jobs can be created," she said.

Ford pointed to a coalition of groups and companies that have come together to champion universal high-speed internet access across the country. The group is advocating for $80 billion in broadband investment. "This is about American competitiveness," she said.

Reflecting the rural broadband need, companies involved in the American Connection Project are turning on their Wi-Fi access so students can use the internet for schoolwork or other needs. Having companies such as Tractor Supply turn on their local internet points to some of the demand needs facing people. "And this is one of the No. 1 investments for an infrastructure bill in this next administration," Ford said.

Duvall also recalled a trip to western Kansas where the dominant discussions at a community meeting revolved around broadband access and health care. Both were needed to bring young people back to small towns, he said.

Looking at climate change, both leaders pointed out the intense pressure on agriculture to implement climate-smart farming practices. Farm Bureau and Land O'Lakes both support a bill in Congress, the Growing Climate Solutions Act, as a way for USDA to establish a certification program for carbon credits.

Duvall noted more than 140 million agriculture acres over time have been put into USDA conservation programs and farming overall has reduced greenhouse-gas emissions roughly the same amount as taking 17 million cars off the roads. "So, we have come a long, long way in taking the practices that are already available to this and done a tremendous job, and we want to make sure it gets recognized," Duvall said.

Ford said there are multiple changes happening as agriculture moves forward in climate-change mitigation and adaptation strategies. For one, banks will start lending against the investment that farmers have made to make their land more resilient, she said. That will help carbon become priced more aggressively. Land O'Lakes has already started partnering with Nori, which Ford said, "wants to be the eBay of carbon-credit trading." She added, "Agriculture can be a carbon sink. It can go carbon negative and be part of the solution to climate change. So that's an opportunity."

Land O'Lakes has a software platform, Truterra, that helps farmers understand the investments they can make to improve their production sustainably. It helps producers track their carbon capture; that will help as carbon markets expand as well. And, again, Ford related such data-intensive products to the need for broadband technology.

"This is going to be the way of the future," she said. "This is a proof point of the use of technology and making sure we are developing climate-smart practices."

Ford also noted there are a broad array of implications around climate-smart policies. Farm leaders need to look at the long-term implications of the country moving toward electric autos and the impact that will have on biofuel demand. She noted the biggest investment in electric vehicles right now is coming from China.

"So even thinking that as an export market for corn and beans, they are already going down a particular path," she said.

Both Duvall and Ford also said agriculture needs to think more about diversity. Ford, who is the first openly gay woman to lead a Fortune 500 company, said agriculture needs diverse voices that will bring in the best workers and critical thinkers. "I do my best work because I am myself. I want to be valued by my work, by my content."

Agriculture, she said, needs to "bring in people who are excited about the work we do. We need the best and the brightest."

Duvall said at Farm Bureau he wants to be inclusive of genders, races and sizes and types of farms.

"Our organization is 102 years old. We are known for being very slow to change," Duvall said. "We want to move forward and do our part in solving these problems. We are intensely involved in developing new leaders in agriculture." 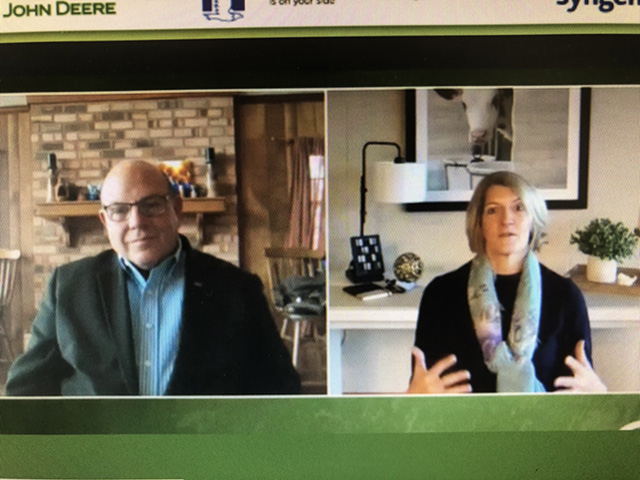