OMAHA (DTN) -- President Donald Trump is preparing to roll out a reported $13 billion in new coronavirus aid payments to ag producers, but his administration also is coming under withering criticism over a report that USDA funds will be used to subsidize oil refineries.

President Donald Trump is expected to announce at a rally in Wisconsin on Thursday evening that USDA will provide a new round of aid for farmers using funds added to the Commodity Credit Corp. from the CARES Act last spring. USDA's proposed rule for the second round of aid under the Coronavirus Food Assistance Program (CFAP) was sent back to USDA from the White House Office of Management and Budget, setting up for USDA to announce a new aid package. Sign-up for the first round of aid under CFAP ended last week.

Agriculture Secretary Sonny Perdue told reporters in Iowa on Sept. 3 that the next round of CFAP would cover as many as 89 crops and livestock, but the "CFAP-2" would not include funds for ethanol producers. Perdue said there wasn't enough money in the CCC to pay processors. Congress would need to authorize such payments, the secretary said.

On Wednesday, Reuters first reported that the Trump administration is looking at providing at least $300 million in cash to oil refiners that do not receive small-refinery exemptions under the Renewable Fuel Standard for the 2019 compliance year. Reuters reported, "The financial relief could come from funds within the U.S. Department of Agriculture, five sources familiar with the matter said. It was not clear when the aid would be distributed."

USDA's Commodity Credit Corp. is paying out more direct aid than ever before. The CCC fund -- and how USDA uses it -- is getting attention in a lot of ways this week.

The idea of using Commodity Credit Corp. funds for petroleum refiners drew fire from Sen. Charles Grassley, R-Iowa. In a statement Thursday, Grassley questioned how it would be possible for USDA to pay direct aid to oil producers.

"Giving away Commodity Credit Corporation funds to big oil that were meant for struggling farmers would be an outrage," Grassley said. "Thankfully, the law is clear, so there's no reason to believe Secretary Perdue would ever consider such a thing. Given the Trump administration's rejection of gap-year SREs this week, it's not a surprise that big oil is looking elsewhere for government handouts."

Geoff Cooper, president and CEO of the Renewable Fuels Association, on Thursday called out the possibility of aid payments to oil producers.

"This shameless new ploy by the refiners shouldn't surprise anyone," Cooper said. "Through never-ending attempts to undermine demand for ethanol, Big Oil has been trying to pickpocket the American farmer for years. The only difference this time is that they're not even trying to be sneaky about it."

A new aid program for farmers from the Trump administration would come from $14 billion provided by Congress to replenish the CCC in the Coronavirus Aid Relief and Economic Security (CARES) Act last spring. USDA has been putting together a program to compensate farmers and livestock producers for losses that happened after April 15. The first CFAP aid has paid out $9.9 billion to 621,919 producers. Cattle, dairy, corn, hog and soybean producers are the main aid recipients. USDA had projected spending $16 billion for the CFAP.

Earlier this week, senators from both parties complained about how USDA divvied up $14.4 billion in CCC funds in 2019 under the Market Facilitation Payment (MFP) program -- trade aid for producers affected by the ongoing trade war between the U.S. and China. A Government Accountability Office report showed per-acre payments skewed to Southern cotton producers over other agricultural products hit harder by trade losses. Sen. Debbie Stabenow, D-Mich., questioned providing more funds to the CCC.

"We've already provided USDA with $30 billion, and they have spent $10 billion out of $30 billion on a program that was supposed to spend $16 billion," Stabenow said. "So the first question is: Why do we need additional dollars?"

Stabenow said that in every other government program, the question is asked: If dollars aren't spent, then why are more dollars needed?

"Well, this is a situation where they have not spent the funds they have been given, first of all," she said. "Secondly, there is not specifics on how they want to spend the money."

Stabenow also stressed USDA should not be threatening the farm bill programs -- ARC, PLC, CRP and other programs created for USDA under the farm bill.

"So they have a lot of questions to answer before I would support doing additional funding," she said.

But the American Farm Bureau and 39 other groups made the case that CCC funding needs to be replenished because CFAP has drained the fund, along with other payments made to the seafood industry. They wrote to congressional leaders on Monday, calling for reimbursement of the CCC in any legislation that is meant to keep the federal government operating into fiscal year 2021, which begins Oct. 1.

Farm Bureau detailed that, after a second round of CFAP -- $13 billion to $14 billion -- then CCC would be left with a balance of about $2 billion. That would delay payments for the commodity and conservation programs for several months, the groups stated.

"The magnitude of the next support package is unknown," wrote Farm Bureau economists in their Market Intel blog. "However, given that CCC resources were used to partially fund the first round of CFAP and will be used for the newly announced Seafood Trade Relief Program, USDA likely does not have sufficient resources to meet upcoming farm bill and conservation program payments beyond October without an immediate replenishment of the CCC in a continuing resolution."

The full blog entry can be found here: https://www.fb.org/….

Republicans, who control the Senate, have a different take. Farm-state Republicans want more funding added to CCC and say USDA programs are at risk without it.

On Thursday, Republican senators from Kansas, North Dakota, South Dakota, Nebraska, Iowa, Mississippi and Arkansas went to the Senate floor and held a colloquy -- during which they each talked -- urging the Senate to replenish the CCC. The senators said failure to add funds to CCC "would not only hurt already struggling farmers, ranchers and growers, it would jeopardize the implementation of 2018 Farm Bill programs."

"I would stress to my colleagues that now is not the time for political gamesmanship," Roberts said. "If Congress does not replenish the CCC, it could significantly harm or even halt these important programs. Farmers, ranchers, and others in farm country are counting on us to do our job."

Sen. Joni Ernst, R-Iowa, who is in a tight reelection campaign, noted the Iowa Farm Bureau had stressed to her that Congress needs to make sure the CCC is fully funded.

"Our farmers need certainty. I hear it time and time again -- whether it's trade, it's biofuels or it's the supports that are coming from USDA."

Former Agriculture Secretary Tom Vilsack, a Democrat, on a call Thursday countered that USDA was using CCC funds extensively because of poor policy decisions that affected trade markets and domestic demand for products such as ethanol.

"The question is, Why do they need help? They need help because of an ill-advised trade war, a failure to adequately provide support for the renewable fuels industry and a pandemic that wasn't properly handled," Vilsack said. He added, "So I understand why USDA is utilizing this resource. The question I have is, After they utilize these sources, what are the consequences in the long term? Does it make it more difficult in the future for farm bills or support programs, for ways in which we have traditionally assisted farmers, does it make it more difficult to do that? We certainly saw pushback on direct payments."

The National Pork Producers Council reiterated on a call Thursday the need for more aid in legislation. Hog producers are still faced with $5 billion in losses, yet aid to pork producers under CFAP right now is about $593 million. USDA rules on income and payment limits have limited aid. NPPC wants to see additional funds for producers that do not have the income or payment limit restrictions.

"The way our industry is structured, we haven't benefited fully from the payments," said Nick Giordano, NPPC vice president and counsel, global government affairs. He added, "We appreciate what Congress has done, and we appreciate what USDA has done. I'd say it's mixed, and we're hoping that more of our producers -- I mean, we're losing producers, large producers, medium producers, small producers -- and the safety net is really, really important."

NPPC also wants a program that will compensate producers for euthanizing animals, which USDA has maintained it does not have authority to do right now. The pork producers also want changes in the CCC charter to provide USDA authority to provide aid in a pandemic.

NPPC leaders said Thursday they were not privy to any of the details about USDA's new program.

Former USDA Chief Economist Joe Glauber said that, in 30 years working with USDA, he recalls CCC funds used in limited aid programs under the Clinton, Bush and Obama administrations for pork producers, cotton processors and the like. He questioned if the magnitude of CCC funds being used to spend billions of dollars repeatedly for market aid will draw more scrutiny.

"So these things are not unusual, but it's just the magnitude of this is so huge," Glauber said. "You could see where a new person in the White House -- or you could see where this maybe happens even if Trump is in there next year -- that somebody is going to say, 'Wait a minute. We don't like this use and see it for what it is: a political thing to essentially buy votes or whatever."

Glauber added that aid for the coronavirus should be seen a little differently because Congress did authorize that spending. Glauber noted that now farm groups are pushing to see CCC doubled in size as well. All of this goes against the planned programs of the farm bill, he said.

Questions also are being raised about what would happen to farm income if the CCC funds are cut off, as the economists at Food and Agricultural Policy Research Institute (FAPRI) alluded to, Glauber said.

"FAPRI was alluding to a big cliff in 2021, and you're going to come off this sugar high of all this money, and then you are back to the old farm bill, which doesn't provide as much to everybody," Glauber said.

"So imagine that, going in with a $60 billion or 50 billion bank account and an open checkbook, without this sort of oversight," Glauber said. 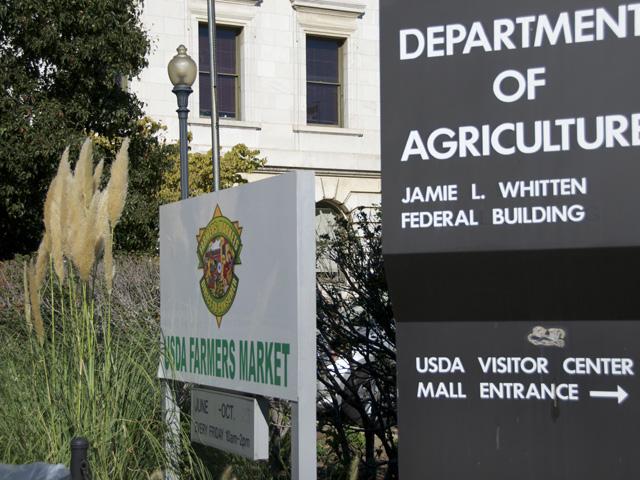