GLENWOOD, Iowa (DTN) -- The executive order signed Tuesday by President Donald Trump is expected to provide more federal resources to ensure packing plants have safety measures in place for their workers to continue processing meat and other food products.

The order, though, doesn't mean everything goes back to normal now that thousands of plant workers have already become infected with COVID-19 and plants will have to quickly reconfigure options to better protect workers.

The president used the Defense Production Act to deem packing plants as critical infrastructure for the nation to protect the food supply. The order effectively assures state and local officials cannot shut down a packing plant if it is following the worker-safety guidelines issued over the weekend by the Centers for Disease Control (CDC) and the Occupational Safety and Health Administration (OSHA).

On Wednesday, Trump hosted an industry call with more than 25 leaders from agricultural groups and major food companies, though no union leaders representing workers were on the call.

A news release from the White House stated the corporate executives and trade association leaders thanked the president for "the unprecedented level of support they have received before and during the COVID-19 pandemic."

More than 20 plants remain shut down on Wednesday. The high volume of worker infections, estimated at more than 5,000, also has led to at least 20 related deaths. That has caused packers to close plants across the Midwest and Southeast, especially as state and local officials raised alarms over the volume of worker-related cases.

Smithfield Foods stated its support for the president's action, citing the safeguards that would ensure food continues to be produced and that there would be no protein shortages. The action "also protects the livelihoods of millions of American family farmers who produce bountiful livestock supplies but rely on meat processing facilities to convert that abundance into food."

Smithfield also credited both its workers and unions as "frontline responders, for their patriotism and willingness to step up in a selfless way to keep food on table during this global pandemic."

Tyson Foods announced another bonus to its 116,000 frontline workers of $120 million, doubling a bonus offered earlier in April. Tyson also is raising short-term disability pay and detailed new screening and safety measures at its plants.

Unions are strongly criticizing the president's actions, and they maintain more testing and personal protective gear is needed to protect workers.

Advocates for workers also continue to press their cases with governors. The Omaha World-Herald reported Wednesday more than a dozen groups signed a letter to Nebraska Gov. Pete Ricketts pointing to the high volume of cases in communities with meatpacking plants.

"The spread of COVID-19 in meatpacking communities is happening because meat and poultry plants have responded insufficiently to this public health crisis," Becky Gould, executive director of Nebraska Appleseed said on a call with journalists. "We do not have to choose between food production and workers' safety."

Also Wednesday, Minnesota Gov. Tim Walz and House Agriculture Committee Chairman Collin Peterson, D-Minn., held a press conference in Worthington, Minnesota, after JBS USA began euthanizing roughly 3,000 hogs at the plant as a way to cope with the volume of animals not being processed now.

Walz and Peterson both reiterated multiple times they were not going to support reopening packing plants in that state unless workers are comfortable with the safety conditions at the plants.

"If he had his way, we would like to get this going in about three days," Peterson said, adding that that schedule is probably overambitious.

Peterson later said the primary condition for reopening these plants is that the workers are going to be safe returning to that environment. The retooling also will slow down line speeds.

"The biggest problem in these plants is getting the workers to be able to come back," Peterson said. "They have got to feel like they are safe."

The risk of not getting plants open is that it will be felt in the food supply, Peterson said.

"We're about three weeks from not having pork on the shelves in grocery stores," he said.

Iowa Rep. Steve King, R-Iowa, told DTN he heard at least one industry estimate that as many as 1.25 million hogs may need to be euthanized because of the packing-plant disruption caused by the coronavirus.

Still, until the plants reopen, Peterson said producers need to find ways to euthanize hogs that cannot go to processing plants. While JBS euthanized roughly 3,000 hogs, that was about 10,000 fewer than Peterson had hoped would be processed. The problem, he said, was that the effort ran out of trucks to haul away the carcasses. Peterson credited JBS for working with him on a strategy to euthanize animals.

Peterson also highlighted a problem he raised on Tuesday regarding USDA's authorization to act in the crisis. Right now, USDA is not authorized to pay indemnities for farmers who have to depopulate livestock or poultry due to the coronavirus. USDA is authorized to pay for such situations only with diseased animals. Peterson said he intends to change the law, and make it retroactive, once Congress returns to work.

"I'm going to give the authority to the [ag] secretary to retroactively pay farmers for euthanizing and hauling and burying them, and all of that stuff," Peterson said.

Walz highlighted the "huge economic engine" of food production, "but more than that, it's part of the culture of who we are."

At least some farmers attended the Worthington press conference to see what they need to do to euthanize their hogs.

Walz said he "feels the sense of urgency" regarding the situation.

"No one wants to talk about humanely depopulating the nation's hog supplies," he said.

Walz stressed the importance of getting packing plants up and running, but he also stressed that the right practices need to be put into place for workers.

"We need to be processing food for this country," Walz said. He added, though, "No executive order signing that the president does is going to change the fact that the virus will still have an impact if we don't get things right. And no executive order is going to get those hogs processed if the people who know how to do it are sick or do not feel like they can do that. So we have a common goal here."

In Iowa, testing has ramped up for Tyson Foods workers in Waterloo, and Black Hawk County is now seeing a spike in cases over the past several days as a result. Waterloo closed as Tyson also began to reopen processing at Columbus Junction, Iowa.

"The situation continues to build here in Iowa in terms of packer-capacity reductions," Iowa Agriculture Secretary Mike Naig told DTN on Wednesday. "Or seemingly almost every plant dealing with some processing reduction that is just creating a ripple effect, backing things up on farms. That just continues to build."

Iowa is providing some assistance to help producers with euthanizing animals. Iowa officials on Thursday will launch a "resource coordination center" in the state with USDA and the Iowa Pork Producers Association, as well as Iowa State University Extension. The center, with a hotline number, will help farmers address ways to manage livestock rations to slow the growth of animals, as well as resources for euthanizing and disposing of animals.

Invoking the Defense Production Act sends the right signal that more coordinated work is needed to test workers and provide them confidence to work, Naig said.

"Really the thing that helps to fix the situation is to help keep those plants online," Naig said. "We've seen some situations in other states where states have asked plants to shut down, and community leaders have asked plants to shut down, and I think this sends a signal to them that that is not appropriate. We need to be trying to work together to operate."

Still, Iowa typically has pork packing capacity of about 150,000 head but right now is down roughly 50,000 head a day in that processing capacity.

"We think we have been doing many of the right things trying to work together to get folks what they need, to get testing done, to give confidence to those workers they can go to work safely," Naig said.

Officials in several states have called for indemnity payments for hogs that have to be euthanized, as well as some way to offset those disposal costs.

"Broadly, it seems animals that have to be destroyed or disposed of, we think there ought to be a payment to help deal with that," Naig said. 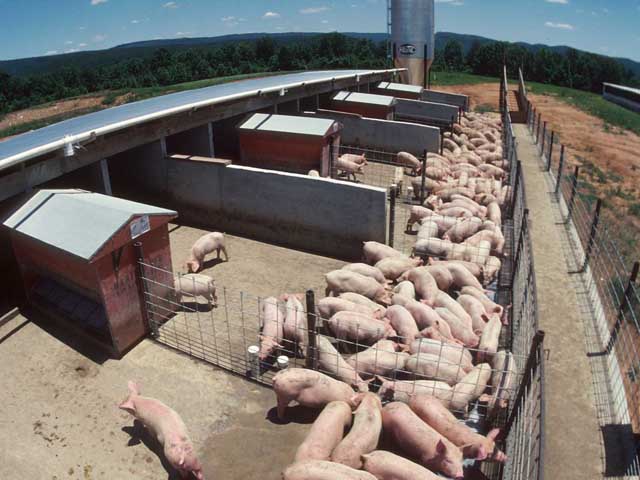