GLENWOOD, Iowa (DTN) -- Pork producers are facing a growing logistical nightmare for market-ready hogs as pork plants continue to idle due to coronavirus outbreaks among workers.

The pork industry in the Midwest has had a continuing stretch of major packing plants close, as JBS SA announced Monday it would suspend operations at its Worthington, Minnesota, plant, which processed about 20,000 hogs a day.

"We don't make this decision lightly," said Bob Krebs, president of JBS USA Pork. "We recognize JBS Worthington is critical to local hog producers, the U.S. food supply and the many businesses that support the facility each and every day."

Walcott, Iowa, farmer Mike Paustian, president of the Iowa Pork Producers Association, normally sends his finished hogs to the Tyson Foods plant in Columbus Junction, Iowa, which is now in its second week of being closed. Packers are starting to juggle truckers and hog delivery to other plants, but that also means displacing another producer's expected time for hog delivery as well.

"That's only going to get worse as we have more plants shutting down," Paustian told DTN. "There really isn't anybody that isn't being affected at this point. It's just rippling through everywhere."

Tyson announced late Monday that it would "resume limited operations" in Columbus Junction starting Tuesday after being idled for two weeks.

The three packers and others idling pork plants have now collectively reduced daily processing capacity in the neighborhood of 102,000 head or about 20% of all packing capacity, said Steve Meyer, a pork industry economist for Kerns and Associates.

The pork industry came into 2020 looking for greater export access and a chance for producers to turn around multiple years of losing money. Now, industry analysts forecast they could lose an average of $37 a head for all of 2020.

"The big question right now is: How long are we going to operate with reduced packing capacity?" Paustian said. "The longer it goes on, the more painful it's going to get."

Besides Columbus Junction, workers at Tyson Foods have been affected with more positive cases reported at plants in Waterloo and Perry, Iowa. The Sioux Falls Argus Leader reported roughly 725 workers at the idled Smithfield Foods plants had tested positive, and caused another 143 related cases. The Centers for Disease Control is involved in trying to curb the Smithfield outbreak.

Iowa has now announced broader coronavirus surveillance at packing plants, including testing employees even if they are not showing symptoms. Minnesota officials are working with more than 20 large packing plants in the state and asking them to report the health status of workers to help control the spread.

The United Food and Commercial Workers (UFCW) International Union sent a letter to USDA on Monday outlining its position on steps needed to protect workers from the coronavirus.

The union stated essential workers should be prioritized for testing and be given immediate access to personal protective equipment. For poultry workers, the union said USDA needs to stop granting regulatory waivers for maximizing line speeds because that leads to more crowded conditions for workers on the line. Social distancing should be mandated where possible, and those who test positive or show signs of COVID-19 should be allowed to stay at home, with pay.

Most companies have announced workers are being paid to stay home during shutdowns. UFCW and JBS also announced an agreement to improve protections for workers as well as a temporary wage increase of $4 an hour.

Also Monday, a group of 36 Democratic senators wrote a letter (https://www.agriculture.senate.gov/…) to Vice President Mike Pence and the Trump administration to "take aggressive action to protect essential workers and the food supply" from further disruption. Beyond workers testing positive with COVID-19, the letter cites both high absenteeism by workers or pressure from companies for them to work.

The letter highlights several questions to administration officials about how they are working with the food-supply chain to control the outbreak while also keeping the food supply chain going.

Paustian said companies and officials need to find ways to test workers and keep them safe but also to allow plants to operate. The reason agricultural jobs were deemed essential is because society wants to ensure there is plenty of available food for everyone, he said.

"That means some of us are going to have to keep working even in the face of a pandemic like this," Paustian said. "That's really what it comes down to at this point. We understand they have got to do it in a way that protects their employees and allows things to keep moving smoothly on their end. I don't envy the task they are trying to do now."

The packing plant closures are leaving producers with hogs that will continue to grow past standard market weights. A packing plant can close and shut the lights off, but a farm simply can't do that.

"There's no switch to flip on the farm, and that's where the pain is really going to be felt with producers trying to manage their animals and care for the welfare of the animals," Paustian said. "But at a certain point, these market-ready hogs are going to be so big that packing plants aren't even going to be able to handle them properly.

Already, there have been discussions over the idea of mass euthanasia in the hog industry, Paustian said.

"It's definitely making us consider options that nobody really wants to think about." He added, "As much as nobody wants to see that happen, it might come to that. We hope it doesn't."

USDA on Friday announced what is expected to be an early aid package -- with more possible help coming later in the summer -- that includes about $1.6 billion in direct aid to pork producers. USDA will also buy agricultural commodities for food banks as well. There was nothing announced so far, though, that could help producers manage packing plant closures.

"I think what got released on Friday will go more towards addressing the low-price situation that we're in now, but I don't know it really will do anything to address the logistical issue that is kind of staring us in the face," Paustian said.

While the unions want to slow down killing lines, Paustian suggested speeding up the lines, but rather than further fabrication of the carcasses, quarter them and put them into cold storage. That might alleviate some of the challenges right now with plant capacity.

"There's no clear answers at this point, that's for sure. Producers are kind of holding their breath and seeing how bad it's going to get." 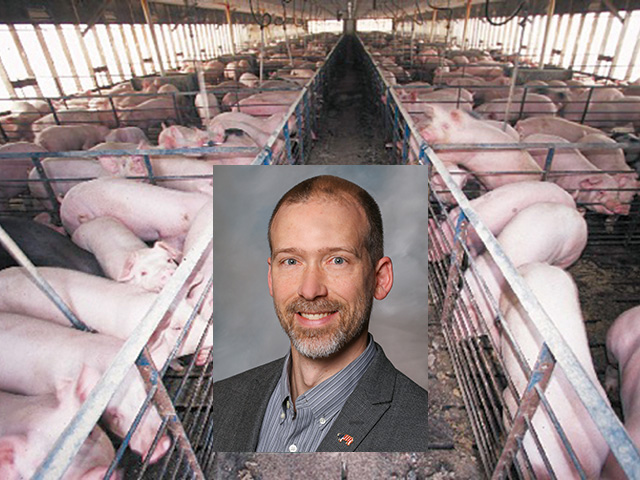