GLENWOOD, Iowa (DTN) -- Responding to the economic impact on agriculture brought on by the coronavirus pandemic, the Trump administration will provide an initial aid package of roughly $16 billion in direct payments to farmers and ranchers and another $3 billion in food purchases.

Agriculture Secretary Sonny Perdue announced details of the "Coronavirus Food Assistance Program" on Friday at the nightly White House press briefing with President Donald Trump. Perdue said the initial aid package comes largely from the $9.5 billion in funds from the stimulus bill last month, as well as $6.5 billion from the Commodity Credit Corp., and other funding sources.

"I think America knows that more than ever that the wholesome food our families depend upon starts with our farmers and ranchers," Perdue said.

Hoeven's news release stated farmers will receive one payment based on a formula detailing price losses from Jan. 1 to April 15, and paid on 85% of that price loss. Commodities eligible for the program must reflect at least a 5% price decline within that time. A second part of the formula involves projection of potential losses from April 15 through mid-October and farmers will be paid based on 30% of those expected market losses.

Payments will be limited to $125,000 for each commodity with a $250,000 payment cap to an individual or entity. Perdue indicated there may not be a means test for farmer eligibility. "This program is open to farmers and ranchers regardless of size if they have suffered a loss."

While announced late Friday, USDA will begin signup in early May and payments will start to be delivered later in May or early June.

Left out of the aid package, though, was any aid for the struggling ethanol industry. The Renewable Fuels Association said the industry and the 350,000 workers supported by the biofuels industry "were left behind." Roughly half of ethanol capacity has gone off-line in the past couple of months due to the collapse in oil prices and driving demand nationally.

"USDA missed a crucial opportunity to lend a helping hand to an industry that is suffering the worst economic crisis in its history," said Geoff Cooper, president and CEO of the Renewable Fuels Association. "Roughly half of the ethanol industry is shut down today, as fuel demand has collapsed in response to COVID-19. Corn demand and prices have plummeted as plants across the country are idling. Jobs are being lost, grain markets are being ravaged, rural communities are being destabilized, and the long-term future of homegrown renewable fuels hangs in the balance."

Perdue acknowledged "huge challenges" in the biofuels industry, "but frankly at this point there's just not enough money to go around. The demand from all of the sectors was just more than we could accommodate at this time."

USDA will also spend $3 billion in fresh produce, dairy and meat products, "to be distributed to Americans in need through our food bank networks as well as other community and faith-based organizations." Saying the restaurant and institution shutdown had disrupted the supply chain, Perdue said USDA will put those regional and local private food distributors to work by using monthly purchases of $100 million each in dairy, product and meat products, and package those products in boxes for delivery to food banks. It reflects a budget idea the Trump administration has pitched called "harvest boxes."

"It's new and different and we have never done this before," Perdue said. He added, "We hope to prepare these boxes to off-load some of the work for the food banks and their volunteers."

Perdue added, "Having to dump milk or having to plow under vegetables ready to market is not only financial distressing, but it is heart-breaking as well to those who produce them," Perdue said.

Another $14 billion in funds for the Commodity Credit Corp. will become available near the end of June and Perdue indicated those funds also likely will be needed for direct aid.

Dairy farmers had asked for USDA to consider some supply management provisions, such as having producers scale back production, as well as reopening the Dairy Margin Coverage (DMC) program. Perdue said supply management would be a longer discussion, and would be more costly to implement.

The secretary also said DMC is an insurance program and USDA had aggressively tried to get many dairy producers to sign up for it last year. Allowing farmers to sign up now would be counter to getting them to focus on risk-management tools.

Sen. Pat Roberts, R-Kan., chairman of the Senate Agriculture Committee, said farmers and ranchers are resilient, but they are also facing incredibly tough times. "Delivering this much needed relief expediently and efficiently will help producers manage their operations, as well as put food on the tables of folks who need it most," Roberts said.

Perdue and USDA have been inundated with aid requests since the president signed the $2.2 trillion Coronavirus Aid, Relief and Economic Security (CARES) Act, as nearly every agricultural sector has analyzed its economic losses and called for direct aid from USDA. Just this week, the National Cotton Council projected the industry has lost $3 billion to $3.5 billion from lost exports. Pork producers estimated losses this week at $5 billion for the year, while separate cattle producer groups put losses between $13.6 billion to $14.6 billion.

"While the relief funds that have been allocated to USDA by Congress represent a start to stabilizing the industry, there is much more work to be done to protect the cattle producers who are an essential component of the agriculture industry and the anchor for rural America," said Marty Smith, president of the National Cattlemen's Beef Association. 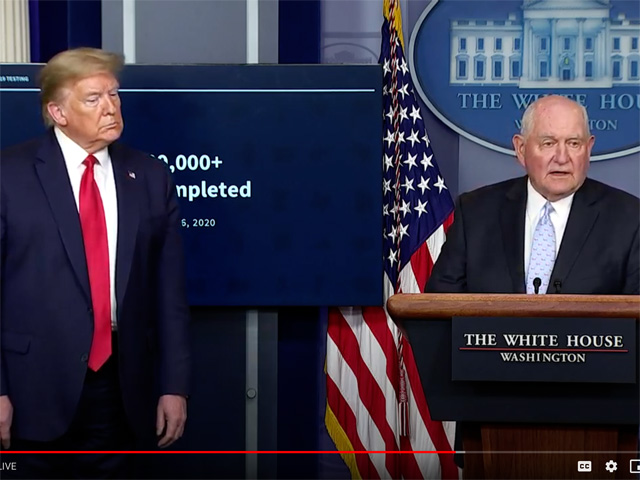