GLENWOOD, Iowa (DTN) -- The aid price tag from individual commodities is overwhelming the funds set aside for USDA, the chairman of the House Agriculture Committee pointed out Wednesday.

Rep. Collin Peterson, D-Minn., held a telephone town-hall meeting about the coronavirus, taking an array of questions from rural residents that focused heavily on health care and agriculture. Pointing to challenges for agriculture, Peterson said cash corn prices in his district were below $2.85 per bushel and soybeans below $8 per bushel. "All of the commodities in agriculture are losing money. It's a tough situation."

Talking initially about business loan programs, Peterson said he spoke with Agriculture Secretary Sonny Perdue on Sunday night and USDA is working quickly to put together an aid package for farmers.

"There will be some money to farmers," Peterson said. "They are going to get paid out by USDA on a per-acre or per-animal basis. In the case of dairy, it's going to be so much per hundredweight. That should come out in the next week or two, but there will be some direct help for farmers and it will not have to be paid back. That's coming directly out of USDA."

On a press call Wednesday, Perdue said USDA staff are meeting daily on how to put together an aid package for producers, and talking with members of Congress.

"Our goal is to get it done sooner rather than later, but we want it done very inclusively as well," Perdue said. "We're in the process right now of collecting proposals and ideas from every sector affected, so we can be as balanced and fair in the allocation of the $9.5 billion, as well as what we have currently in CCC, which is $6 billion."

While the CARES Act also approved a $14 billion increase for CCC funds, Perdue said those funds will not come until later. A USDA spokesperson responded to a question from DTN about the CARES Act funding. The spokesperson stated in an email that the "$14 billion replenishment for the CCC is reflected in the June 2020 report of its financial condition. Therefore, the replenishment cannot be secured until after June 30, 2020, when the financial statement is completed."

"The corn and soybean guys asked me to run some numbers and what they are talking about is $30 billion to $40 billion," Peterson said. "So you can see what the problem is. All of these are worthwhile and worthy things, but I don't know where the money is going to come from to do this."

Peterson added he did not publicly complain about the Market Facilitation Program, which paid more than $23 billion to commodity producers from 2018 until now. "I was always worried this was going to come back and haunt us and it is to some extent now because people feel like we got a lot of money already, and we did," he said.

Still, cash prices now are lower than they were under the two past years when farmers received MFP payments. The low prices are leading farmers to question the value of planting this spring, Peterson said. "I've got farmers calling me up asking me whether it makes sense for them to plant or not because they are going to lose a lot of money," Peterson said. "It's a big problem."

The concern about corn demand centers around ethanol plants, Peterson said. He pointed to recent ethanol plant closures and expressed concern that those will continue. "That's going to further tank the corn market, so we're in a big world of hurt," Peterson said. He added, "I just think it's unlikely we're going to convince anybody is going to give us more money, but maybe we will. We will see what happens."

Peterson added, "I understand the need, but there are a lot of hands out there as well."

Peterson added he and Perdue also each agreed to send letters to the Department of Justice to have them investigate how packers have changed their buying habits since COVID-19 hit the U.S., "and whether they are being fair about what they are doing." One question, Peterson said, is how much packers are using their own livestock to their advantage. There also are serious questions about the lack of convergence between the futures and the cash market. Peterson said the Commodity Futures Trading Commission needs to get engaged to understand why there is such a discrepancy.

Perdue on Wednesday also announced USDA's Packers and Stockyards division would extend its oversight to look at the divergence between live cattle prices and boxed beef prices tied to COVID-19. The group has been looking at a similar situation that started last summer with the Tyson plant fire in Kansas.

If the bill moves ahead, Peterson said it would make some changes to SBA rules regarding farmers and emergency loans. Farmers right now qualify for the Paycheck Protection Program (PPP), but the loan program doesn't really work for farmers if they do not have any employees. SBA is not allowing farmers to apply for the Economic Injury Disaster Loan (EIDL) program. Peterson said he had been promised for the past week this situation was going to get fixed by SBA, but that did not happen. Instead, Peterson said language will be added to the $250 billion package this that will ensure farmers can apply for those EIDL loans.

"But we'll see what happens on Friday," Peterson said.

A dairy farmer from Mahnomen, Minn., asked Peterson on the call if he and others "are taking into account the mental health of all these people out here." The farmer added, "The mental health of the people in the rural area is really declining. They are sitting at home watching the news media all day long and they are getting paranoid and panicking, and I don't know what to do about that," the farmer said.

Extra money has been put into the last stimulus bills to help farmers with mental health. More programs have been added at community facilities for telemedicine to talk to people who are struggling. The American Farm Bureau and other organizations also have put together programs to help with mental stress. https://www.fb.org/… 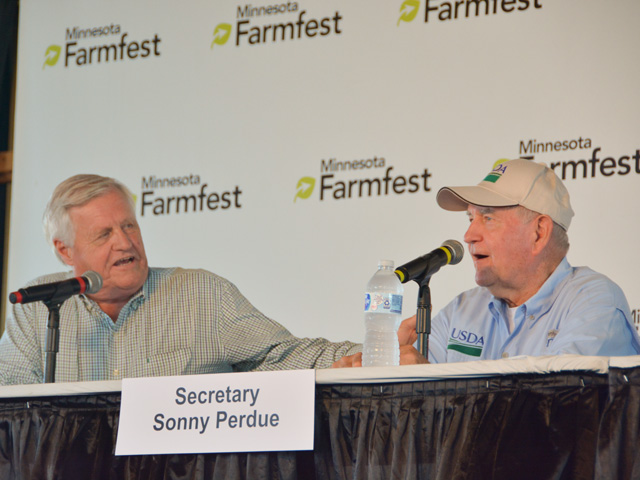