OMAHA (DTN) -- When 2020 began, the dairy industry appeared headed for a recovery period. But now, thanks to the COVID-19 pandemic, the industry is likely to face yet another difficult year. Milk prices could fall to their lowest point in the last five years, according to one dairy policy expert.

The entire dairy industry is struggling to remain profitable in these unprecedented times and is facing several different issues, including drops in both domestic and export demand. But financial help for the industry could be on the way from the federal government.

In a webinar titled "Considerations for Landspreading Milk" on April 7, Mark Stephenson, director of dairy policy analysis at the University of Wisconsin-Madison, said there is long list of concerns facing the dairy industry right now.

Near the top has to be the considerable drop in fluid milk prices. Milk production is up 1.7% across the country in early 2020, and this additional production was already going to keep a lid on prices even before the COVID-19 pandemic surfaced, he said.

With the virus concerns, the CME milk contract price has crashed in the last 120 days, Stephenson said. In January, prices were at $17.50 to $18 per hundredweight (cwt). Last week, (first week of April) prices for Class III and Class IV milk had dropped $5 to $6 per cwt.

This year originally looked to be a recovery time for milk prices after six years of low prices. But now, 2020 could produce the lowest milk prices in the last five years, he said.

"It could be a brutal year," Stephenson said.

In some cases, farmers could see milk price so low the price might not even cover their operating costs. Because of that, Stephenson said, farmers should meet with their bankers to make sure they are on the same page in terms of financial needs.

Stephenson said the dairy market has seen demand severely affected by the many COVID-19 closings.

About two-thirds of fluid milk is consumed at home, while the remaining third is consumed out of the home, he said. While milk sales are up right now, reversing a long-standing trend, the net negative demand is 5% to 10% with the loss of out-of-home consumption.

The same holds true for cheese and butter products. Total cheese consumption could see a net-negative effect of 5% to 10%, while butter demand could be down 10% to 20%, he said.

In addition to lessened dairy demand domestically, Stephenson said export disruptions are another major concern right now. The virus has affected the number of orders in the export market. Mexico, for instance, imports a significant number of U.S. dairy products, and the virus has resulted in fewer orders coming from south of the border, he said.

Problems with closed or limited services at ports are yet another concern in the export market for dairy products, Stephenson said.

"This could tailspin into a worldwide recession because of virus-induced supply chain disruptions and not just dairy," he said.

Stephenson said the plentiful supply of milk, combined with shrinking demand, has led to some cooperatives sending out letters to dairy farmers asking them to participate in voluntary supply management protocols. In some cases, milk has been dumped with processors not having any storage facilities available.

Though no definitive numbers are available, Stephenson estimated maybe 100 dairy producers in Wisconsin have been forced to dump milk already. He advises dairy farmers to perhaps not push production so hard, in order to limit the supply of milk and also help reduce feed costs.

Stephenson said he is also concerned how the dairy industry will continue to operate if COVID-19 is found both on dairy farms and at processing facilities. Needless to say, it would be bad if the virus affects farms and further downstream, he said.

In many cases, milk haulers are smaller businesses with a couple trucks, and if the virus affects milk haulers, milk may not get delivered to processing plants. It would be difficult to find replacement haulers who are well trained, he said.

At processing facilities, the virus could shut down a plant if it was found there. Finding a home for that much milk could then become a real problem, he said.

Stephenson said the federal government could intervene and send aid to the dairy industry. Agriculture has been deemed a critical sector, so some sort of aid is expected, he said.

The National Milk Producers Federation (NMPF) and other dairy organizations are asking USDA for a milk crisis plan. The plan (https://www.nmpf.org/…) calls for as many tools as possible to be used to bridge the supply and demand gap and provide aid to dairy producers and processors.

Stephenson said that among the producer initiatives is a plan to pay producers $3 per hundredweight on 90% of their production if they cut production by 10%. This would run from April to September, and payments during any one of those months would be suspended if the average of the Class III and Class IV prices for that month exceeds $16 per hundredweight.

On the processor side, a forgivable loan program would be available to processors.

"There is a 10% surplus milk on the market," Stephenson said. "I wouldn't be surprised if this (milk crisis plan) happens."

The dairy industry also has asked USDA to buy more of their perishable products and distribute them to food banks and shelters.

On a press call Wednesday, U.S. Agriculture Secretary Sonny Perdue said it's a possibility that could happen, but Perdue also acknowledged some logistical challenges providing perishable dairy products to food banks. For one, some food banks have capacity for cold storage while others do not. Last year, USDA purchased $50 million in fluid milk, but Perdue said it took nearly a year to make that happen.

"The challenge is scale and scope and the amount of oversupply in the dairy industry with the disruption in the food locations and schools and others," Perdue said. 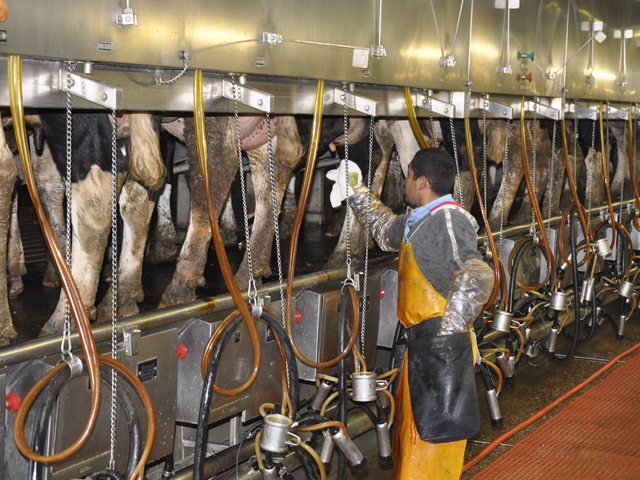