ARLINGTON, Va. (DTN) -- In his role as U.S. ambassador to the United Nations Agencies for Food and Agriculture in Rome, Indiana farmer Kip Tom is fully plugged into the world's food and agricultural crises as they are happening.

Speaking to DTN at the USDA Agricultural Outlook Forum on Friday, Tom discussed the locust plague that began in Pakistan and has migrated across Oman, Bahrain, Yemen, as well as Kenya and Ethiopia. If not stopped in its tracks, the locust could continue to grow and migrate, Tom said.

"In time it's going to continue to move on west. Some people are predicting it could become 500 times worse than it is today," Tom said. "This the worst we have seen it in nearly 70 years."

The U.S. initially contributed $800,000 to try slowing the infestation, but Tom said that has been increased now to $8 million by Secretary of State Mike Pompeo. "Because we know as those locust move across Africa, they are eating the food reserves that the people are producing," Tom said. "We can spend some money now and try to control the pest, and we'll be much better off than if we have to come in later with extreme amounts of aid. So it's an equation you work through and say, it's time to invest."

Tom added, "Again, it's a case where we need to get other countries to step up and do their fair share too. It seems like the U.S. is always the one that is leading the way and contributing the most, but we need help from others. We can't do it all ourselves."

Prior to being confirmed last year, Tom was known for operating one of Indiana's seed corn and soybean farms, Tom Farms, based in Leesburg, Indiana. He had been involved in Indiana economic development and Agriculture Department advisory roles. Throughout his career, Tom has been a proponent of new technology to help spur greater production.

Tom was confirmed as U.N. ambassador in Rome last April after being nominated for the role in July 2018. The United Nations has a broad portfolio with six different food and agricultural development agencies, though the ones that require the most attention are the World Food Program and the U.N. Food and Agriculture Organization (FAO). The U.S. involvement in the FAO is significant with political and economic staff from the State Department, as well as staff from USDA and the U.S. Agency for International Development.

"In terms of the FAO, we want to make sure the organization is appropriately staffed and in the right places," Tom said. "They have got over 13,000 employees -- total employees and contractors -- around the world and in 130 countries."

The main work at the FAO is trying to create some resiliency and capacity for small farm holders to feed themselves. "The reality is many of them are operating using farming practices they have been using for thousands of years now," Tom said. "They really haven't evolved."

During his speech on Thursday evening at Oulook, Tom showed an image of a farmer in Zimbabwe from 800 B.C., stooped over with a hoe tilling a field. Then he showed a more current image from Zimbabwe that looked similar except the farmer was a woman with a baby on her back.

"So adoption of new innovations just hasn't taken place around the world," Tom said. "We're trying to bring in some of the modern tools that we have, and a modern tool to them could just be fertilizer, or it could be hybrid seed, or mechanization. We have got to get them there first, and try to create some supply chains and get to the point we can get the private sector to invest and work alongside the FAO."

Most of FAO work is offering technical guidance to farmers in as many as 194 countries. The agency seeks to bring in companies that develop seed production facilities, food and manufacturing plants and other infrastructure for agriculture. "So we have got a pretty broad engagement line we face working with the private sector to improve livelihoods."

Regarding programs at FAO, the U.S. would like to see at least some of the 190 to 200 programs within the agency consolidated in some way. "We think that needs to be contracted a little bit and have a little more focus," Tom said.

Tom noted in the past FAO technical assistance to farmers has been heavily influenced by European influence. The U.S. is now trying to take some of its innovations to help farmers in sub-Saharan Africa.

"If we can prevent people from losing hope, and feed themselves, they tend to want to stay home," Tom said. "That's what we try to do is create that resilience and capacity building at FAO."

Some of the difficulties at the FAO come from the divergent views of agricultural production by the United States and the European Union. It continues to be perennial problem, Tom said.

"We continue to get into loggerheads with the EU," Tom said. "They spend a lot of time in Africa as they see it as the future breadbasket for them. I struggle with that. They can't feed themselves today, I don't know how they are going to feed the European Union. The reality is they push policies in farming systems, as I've said many times, my grandfather gave up 125 years ago. So that's where we have our issues, and probably the single-biggest issue we have our focus on is trying to get the Euros to understand the access to these technologies across Africa are really going to have a positive impact on climate, feeding people, making sure we see economies grow and communities survive, and families survive."

The World Food Program is in more than 90 countries and feeding more than 80 million people with the U.S. providing as much as 40% of the agency's $8 billion budget. Those food-aid efforts used to focus mainly from natural disasters, but today nearly two-thirds of the places people are fed is in areas tied to conflict, Tom said, such as Yemen, Somalia and Syria. Tom noted Friday there had been some breakthroughs to begin providing food aid in Venezuela. "There are a lot of places where we work and some are more extreme and difficult than others," Tom said. He noted several African countries require WFP help "because of the challenges they face feeding themselves and the challenges they face with extremism moving into those areas, it's tough."

Tom said he also continues keeping tabs with what's going on with his farm while he's gone.

"We've got a great staff at the farm and good leadership. We've got family members involved with that good leadership on the farm. I've got two sons and a sister, and my 91-year-old father is still around. They continue to run the business." 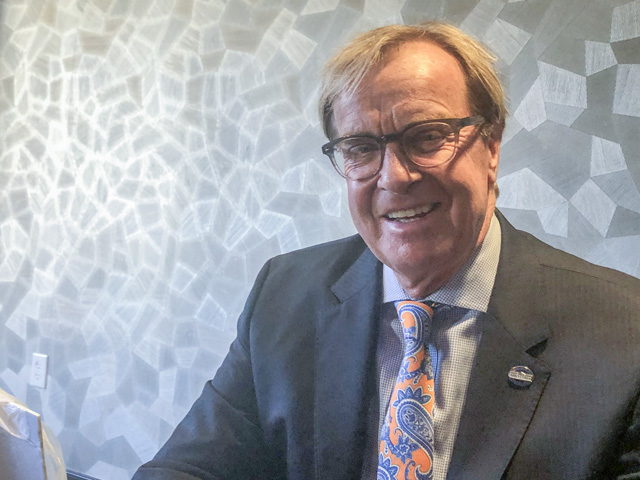