AUSTIN, Texas (DTN) -- Delegates from the American Farm Bureau Federation chose to keep a continuation of Market Facilitation Program payments in their resolution book during debate on Tuesday, reflecting farmers' desire to see results from trade deals before abandoning the aid.

More than 300 farmers from across the country made changes to their policy book on issues ranging from trade aid and dairy policy to farm labor, as well as defining their recommendations for changes to USDA's hemp-production rules. AFBF's delegate session closed out the group's annual meeting this year in Austin, Texas.

Farm Bureau resolutions set the organization's lobbying policies on the federal level. Given that AFBF is one of the most influential agricultural organizations in the country, the group's policies can sway Congress and federal agencies in making regulatory changes.

On the continuation of USDA's MFP payment, Agriculture Secretary Sonny Perdue said there would be a third tranche of payments under the 2019 program coming soon, but there would be no 2020 program. Still, Farm Bureau members voted to keep language in the policy book supportive of MFP payments even with President Donald Trump touting trade wins in China and the congressional approval of the U.S.-Mexico-Canada Agreement (USMCA).

"Our members are basically saying 'Show us results'," said Scott VanderWal, a South Dakota farmer and AFBF's national vice president. "We're very, very happy the president has the China phase-one agreement in place, USMCA in place and will be signed very soon, but no products have moved, implementation hasn't happened yet, and it's kind of a 'prove it to me' thing. When we get down the road, there is nothing we would like better than to really see these agreements kick in and show us some expanded market opportunities, and hopefully the markets will come back with that to where we can go back to making all of our income off the market rather than having the government make up for those trade disputes and the damage to the market that has been done."

Dairy was the major area of debate on Tuesday after Farm Bureau had set up a task force specifically to look at policy changes for the Federal Milk Marketing Orders. The group proposed changes to improve price discovery under FMMO with mandatory price reporting on most dairy products, including high value dairy products and prices paid for milk and milk components.

"You're seeing a lot of frustration in the dairy industry and it came through from our members who are dairymen. The lack of profitability has been pretty severe and long-standing for the dairy industry, and they are looking for ways to change the pricing structure in the United States to make it more fair, reduce overlap and duplicity, things that make the dairy industry less efficient," VanderWal said.

The farmers want USDA to develop an improved method to determine Class I Milk Mover Base Price, which is not reliant solely on manufactured dairy prices.

A big part of the debate was to move the Southeast part of the country to "component pricing" for dairy products under the federal marketing orders. There was still some division within Southeastern delegates over whether that change would help dairy profitability in the region or not. Other parts of the country already have component pricing, but it is not in the Southeast. Currently, more than 70% of dairy sales in the Southeast are fluid milk, but those fluid sales are flat.

A delegate from South Carolina said on the floor that a change to component pricing would offer more reasons for dairies to increase protein feed rations and provide a reason to produce high-component milk.

Delegates also added language to support "flexible farmer and industry-driven milk management system" that could be used in some states such as Wisconsin and Vermont where dairy farmers are increasingly supporting more supply-management programs. Delegates also included language allowing producers to vote on these type of programs individually rather than voting en bloc as a cooperative, as is done now. Farm Bureau also added language to oppose any mandatory federal quota system.

"Again, it goes back to the frustration over profitability," VanderWal said. "Any way we can make the system more efficient can translate into better economic conditions for our producers."

Farm Bureau also added language opposing any guest-worker policy that requires the agricultural industry to pay more than what any other general industry is required to pay -- the state or federal minimum wage. That does not preclude any employer from paying higher wages, as most currently do. Currently, H-2A rules set wages higher than those minimum wage laws. Agriculture should not be held to a higher standard than every other business in America.

Support an uncapped agricultural worker visa program that is open to all segments of agriculture and is flexible enough to provide for the differing needs of farmers and workers.

The delegates voted for a complete overhaul of H-2A guest worker program that would allow the federal government to give farm-guest workers visas for multiple years, and include dairy and livestock employees in the H-2A program. Farm Bureau policy also pushed for lower wage requirements than currently prescribed in the H-2A program, stating that farmers who participate in a federal guest-worker program should be allowed to pay wage rates such as their state minimum wage or 10% above the federal minimum wage.

Among the biggest changes with hemp that Farm Bureau members would like to see would be to allow hemp to have up to 1% tetrahydrocannabinol (THC), the chemical in cannabis that produces the "high." Under the farm bill, legal hemp is limited to .3% THC, and USDA's interim final rule for hemp production requires "hot" crops to be destroyed at .5% THC levels.

Farm Bureau members also want the opportunity to have crops retested if the THC is too high, rather than being immediately destroyed. Further, AFBF members want to see if there are ways to dispose of hot crops other than state or federal authorities destroying the crop.

Delegates recommended the AFBF board "prioritize a deep dive into the current state of NASS reporting, including the agency's methods, its surveys, recent track record, and impacts of incorrect reporting on markets and the bottom lines of producers.

The recommendation noted, "The June 2019 Acreage report was a debacle, and it seems like each NASS report this year has contained surprises and unexpected market impacts, etc."

The recommendation came even after Agriculture Secretary Sonny Perdue sought to tamp down complaints about crop reports when he spoke to Farm Bureau members on Monday. Perdue defended his agency's crop-reporting methodology, but said he would be open to looking at new ways to collect surveys or new technology.

Farm Bureau also added more language revolving around the rights of farmers to repair their own machinery. They supported the use of standardized communication connectors to test signals for all farm equipment with diagnostic capability. The delegates back "right to repair" legislation or agreements with farmers and equipment manufactures that guarantee the farmer/owner and an independent repair technician access to that information, parts and tools needed to make repairs, which includes the ability to reset the operating system.

Following the 2019 crop year that had roughly 20 million prevented-planting acres, farmers had complained that Nov. 1 would be too late to get any value out of haying or grazing a cover crop, so USDA moved the dates to early September last year. Farm Bureau proposed USDA make permanent changes to moving the haying, grazing and chopping date for prevented-planting acres from Nov. 1 to a date set regionally by the Risk Management Agency. Further, there should be no reduction in an insured person's prevented planting payment if a cover crop is hayed, grazed or cropped after that regionally set date.

"We're very concerned as new technology comes along that the traditional forms of protein, especially, are treated fairly," VanderWal said. "We're concerned that labeling is accurate so that consumers know what they are getting and they are fairly informed about the foods that they are buying. We want to make sure synthetic foods are not confused with traditional protein sources and, therefore, are not labeled with common names."

Delegates also voted to stick with language supporting voluntary Country of Origin Labeling after a Texas delegate introduced an amendment to support mandatory COOL. Mandatory COOL was voted down after opposition from several other delegates. One farmer noted mandatory COOL would put the U.S. in violation of the new USMCA. 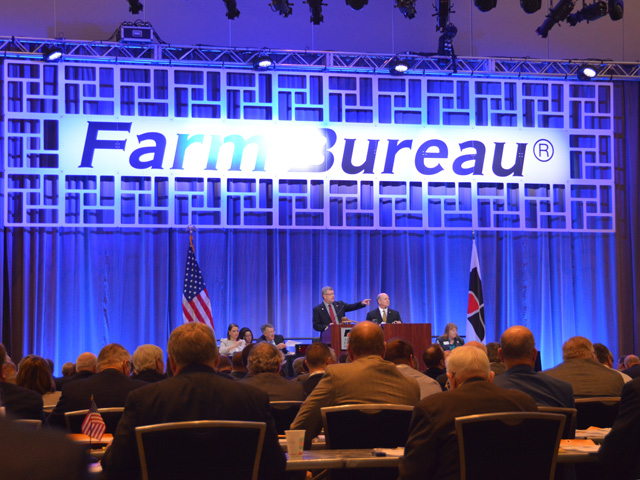