AUSTIN, Texas (DTN) -- Agriculture Secretary Sonny Perdue said Monday the third tranche of Market Facilitation Program payments is "assured" and the payment is "imminent" but he did not have a specific date when that announcement would be made.

Perdue sought to clarify the difference between a "third tranche" of payments from the 2019 MFP and the possibility of a new program payment for 2020.

"I've been telling farmers all fall don't expect a 2020 Market Facilitation Program if we get a deal because you want trade, not aid, and we're going to get our trade."

MFP was meant to replace lost trade. As the phase-one deal with China comes into force, along with the finalization of the United States-Mexico-Canada Agreement, Perdue said the administration wants more trade to develop soon enough so another aid payment will not be needed. It may be summer or fall before those trade benefits show up.

"You remember the cry, we want trade not aid," Perdue told reporters after his speech.

Perdue left open a window, though, for a possible 2020 program, especially if President Trump orders new payments. That's what happened last spring after talks between the U.S. and China broke down. "I will tell you, not from my perspective, but the president has demonstrated the ability to do what it takes to preserve the ag sector in this country," Perdue said.

In his speech, the secretary highlighted the importance of the safety net in 2019 as crop insurance payments and disaster aid reached more than $9 billion, to go along with more than $10.8 billion in MFP payments. All of that helped boost farm income by roughly $18 billion, the secretary said.

In a question-and-answer session with Tennessee Farm Bureau President Jeff Aiken, the secretary said now that the administration has gotten some wins in agricultural trade, it is turning more attention to agricultural labor. The administration is working on "a renewed and refreshed ag labor program," he said.

"Now that we have got some daylight in trade that we're going to enforce, let's work on our labor situation, because if we don't have people who can help us grow these things and harvest our products, then it may not matter," Perdue said. "That may be the limiting factor."

Perdue said he has been trying to persuade others in the administration "to separate immigration, which is people wanting to become citizens, with a temporary, legal guest-worker program.

"That's what agriculture needs, and that's what we want," Perdue said. "It doesn't offend people who are anti-immigrant because they don't want more immigrant citizens here. We need people who can help U.S. agriculture meet the production."

Another issue Perdue wants to reform in an agricultural guest-worker program is wage rates. "We're kind of pricing ourselves out of business here," Perdue said. "We've insisted ... that we have to do something with wage rates."

Perdue said the adverse wage rate has set almost a $15 minimum wage for agriculture, "and no other business in the country has that."

Aiken and Perdue said it was a national security issue to have the labor needed to ensure food production is maintained.

Perdue noted in his speech he wanted to address some of the issues farmers were concerned about in 2019. He said people had concerns about the crop reporting at the National Agricultural Statistics Service survey.

"We got kind of paranoia in light of all the prevented planting and other kind of things that were falling on us," Perdue said "We got a little conspiratorial thinking NASS was out to get us too."

Perdue said he questioned staff and NASS staff were at the AFBF meeting to answer questions about the methodology on how USDA collects that information. But Perdue expressed confidence about the acreage and production data that came out over the summer.

"If you have got an idea how we can use electronics and maybe an app for better surveys, we would like to hear those. We are open to those kind of ideas of using modern technology to get you the best data you can to make plans for your farms."

The secretary added, "At the end of the day, 2019 was tough, but I do believe we have bright days ahead.

Discussing enforceability on the $40 billion to $50 billion in expected agricultural sales to China, Perdue said USDA will keep track of those sales. USDA will provide details to the U.S. trade representative's office and President Trump about what has been sold to China. Staff at USTR would then take those figures to show whether China is meeting its obligations.

"The enforceability provisions are fairly unique though. It's unilateral and the ability to reinstall punitive tariffs there without retaliatory ability on China's part," Perdue said. "The only ability they would have would be to withdraw from the whole agreement. Then it would be a new ballgame."

Perdue said China "has exempted pork and soybeans already," but was leaving other tariffs on different sectors. That is a different interpretation than commodity groups in pork and soybeans understand. Soybeans, for instance, still see a 30% published tariff rate, on top of a normal 3% rate, but China is issuing various tariff waivers to companies importing soybeans. Pork products have tariffs of 60% to 68% on them.

The U.S. is still imposing 25% tariffs on $250 billion in Chinese goods. "So we didn't have a big case to stand on in insisting they remove all of those tariffs," Perdue said.

Before reaching the deal, Perdue had repeatedly said the U.S. had become too reliant on China as an agricultural buyer. The secretary said other trade deals such as USMCA, Japan and South Korea are going to continue to help diversify exports, and the Trump administration is looking to India as well, where the U.S has not traditionally sold a lot of agricultural products.

"We're prepared to expand the envelope of exporting countries, again as a hedge against China fulfilling those export numbers," Perdue said. "But as I said earlier, we don't want to become dependent on any one."

Perdue said he does not know when the president will sign the USMCA, but the secretary indicated Trump may sign the deal in multiple states to highlight the benefits of the trade deal. "This is a big deal for agriculture as a whole and I think it will be signed maybe in multiple states around the country," Perdue said.

The secretary also touched on investments in rural broadband, saying it will change rural Americans' lives, going beyond precision agriculture. E-commerce, tele-medicine and distance learning can all be improved.

"By golly, it's just immoral country kids and rural kids have to drive to town to do their homework today while people in other cities can do it all along," Perdue said, drawing applause from the crowd.

Perdue said internet connectivity is more than a luxury, but a service in the 21st Century. "It absolutely is a business tool that needs to be available to our farms and our rural areas," he said. 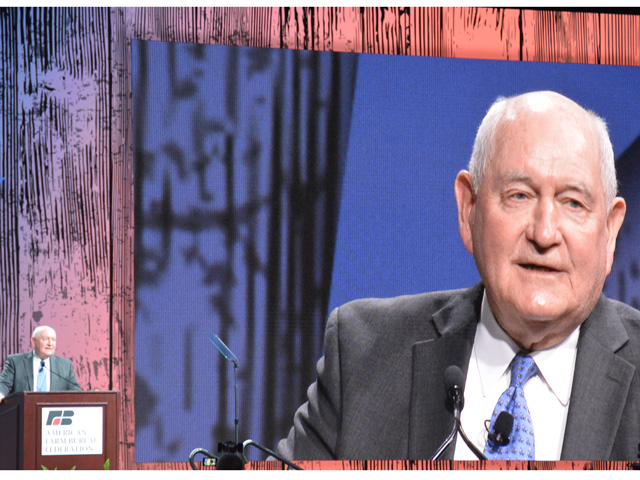