AUSTIN, Texas (DTN) -- In a speech late Sunday afternoon to the American Farm Bureau Federation, President Donald Trump highlighted his recent trade and regulatory victories for farmers while thanking them for standing by him.

The speech to AFBF's annual meeting marked the third straight year Trump has spoken at the convention. On Sunday, Trump reminded the farmer audience he had protected them from economic harm with trade-aid payments while at the same time thanking them for their support. Trump also vowed to come back next year.

The president's speech was full of praise for farmers while he restructured the last few years of trade disputes and economic challenges for producers as a return to good economic times for farmers that were arriving because of his administration's policy actions.

"You feed our people, you fuel our nation, you sustain our land, you uphold our values, and you preserve our cherished American way of life," Trump said. "We want our products made, grown and raised right here in the USA and that's what's happening."

Trump said he hoped farmers "remember before I took office" that American agriculture "was being crushed by an onslaught of massive taxes, crippling regulations, burdensome federal mandates -- you know about that. I released it. I released it all -- and horrendous trade deals."

When he ran for president, Trump said he promised to use everything in his power to protect farmers and he would "always have your backs." Of previous politicians, Trump said, "they talked a lot. They did nothing for you. I kept my promises."

"I don't think the farmers and ranchers have been in this position, maybe ever," the president said.

Much of the increase in farm income is attributed to the $20 billion in direct aid payments that were paid to farmers under the Market Facilitation Program, as well as $9 billion in disaster-aid payments to farmers. Agriculture Secretary Sonny Perdue specifically pointed to those payments when he introduced the president.

"You stood with President Trump and he stood with you," Perdue said. "You had his back and he had yours."

Perdue then reiterated comments he had made that the trade deal with China will be a "bonanza" for farmers.

Trump, early in his comments, said of the trade deals, "I told everybody you got to buy a lot of land and you have got to get great big tractors."

Trump noted China targeted agriculture for retaliation, "they even took ads saying what a person I was." The president defended the formula used for disbursing payments, saying money went to small farmers as well as large. He then said the final installment of Market Facilitation Program payments is coming soon.

The president pointed to the $40 billion to $50 billion in agricultural goods now promised as sales to China in each of the next two years under the phase-one trade deal signed on Jan. 15. Trump rattled off a list of commodities that he said will tear down market barriers and open new markets to China under the deal, including beef, pork, soybeans, poultry, seafood, rice, dairy, animal feed, infant formula and biotech products, the president said.

"This is an incredible success for the entire country and it was your fortitude, your perseverance and your devotion that made it all possible," Trump said.

The president added that the phase-one deal has created a stronger relationship with China as well. "We now have the best relationship we have had with China in many, many years and they respect us now," Trump said, also saying the relationship with Russia and other countries is better now under his administration. "We don't want people taking advantage of us."

Discussing the talks, Trump said he repeatedly walked away from talks with China, but the Chinese wanted a deal and brought his team back to the table. As this was happening, Trump said critics attacked him and media looked for farmers angry about prices and skeptical about the president's strategy.

"Thank you very much to the farmers and ranchers for standing with me and saying 'The president is right. Yes, it's tough right now but the president is doing the right thing.' Thank you," Trump said. "More than anything else, it proved to me that farmers love America and I just want to tell you that America loves our farmers."

Trump noted he is going to Europe this week to speak at the World Economic Forum in Davos, Switzerland. The president said economic leaders from other world powers will hear about the strength of the American economy. Citing the 3.5% unemployment rate and rising incomes, especially for blue-collar workers, the president said the U.S. has the hottest economy on the planet now.

Trump then vented about the impeachment against him. "Tell me what I get out of it? I get impeached. By these radical left lunatics. But that's OK. The farmers are sticking with Trump." That drew another loud cheer from the crowd.

He later criticized "far-left" Democrats, saying they want to raise taxes, "load you up with regulations" and raise energy costs. "More importantly, you won't be able to afford the energy to run your farm. We'll never let it happen."

Trump hit on the tax cuts approved early in his administration that virtually eliminated the estate tax for businesses and farmers. "If you love your children, you do not have to pay the estate tax or the death tax," Trump said.

Pointing to his decision last summer to approve 15% ethanol year-round, Trump said his administration is proudly promoting ethanol. "We're providing more support for ethanol than ever before."

The president also said changes his administration was making to environmental laws would speed up reviews for infrastructure projects. He also noted the EPA's "waters of the U.S." (WOTUS) rule under the Obama administration has also been rescinded, though EPA's actions remain tied up in court.

"We have liberated American agriculture from an avalanche of environmental regulations," the president said. He later added, "As long as I'm president, the government is never going to micro-manage America's farmers."

"That is why I'm directing the Corps of Engineers to withdraw the rule ... and to allow states to manage water resources based on their own needs and what farmers and ranchers want. Water is the lifeblood of agriculture and we will always protect your water supply."

The president also briefly hit on his administration's investments in rural broadband access, which includes a $20 billion program from the Federal Communications Commission that was announced earlier this month. "We are putting America first."

The president concluded, "We're the greatest country anywhere in the world and we are taking care of you."

Perdue and Trump also each offered their prayers and thoughts to AFBF President Zippy Duvall and his family. Duvall did not attend the convention because his wife of 40 years, Bonnie, passed away on Saturday after battling cancer.

"We want Zippy and his entire family to know we are keeping them in our thoughts and prayers," Trump said.

Scott VanderWal, vice president of AFBF and a South Dakota farmer, addressed the AFBF convention earlier in the day. "All of our members have the Duvall family in their thoughts and prayers," VanderWal said. 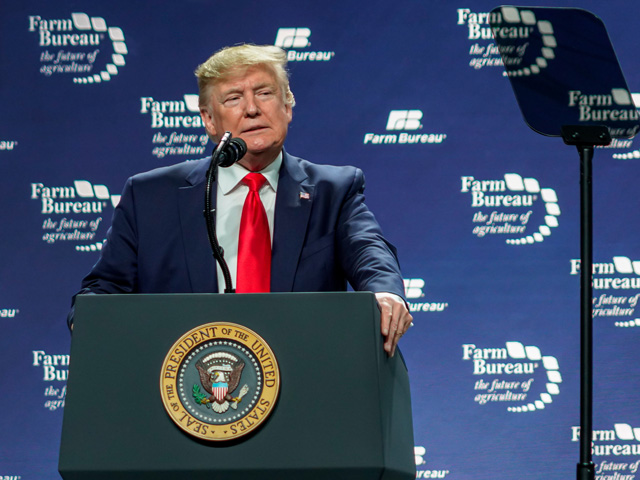