CHICAGO (DTN) -- Farmers looking for some demand drivers to move prices can find a small silver lining that growth in global grains demand has outstripped supply the past couple of years, while the economies in Southeast Asia continue to grow and a possible trade deal with China could spark more demand for ethanol.

The DTN 2019 Ag Summit kicked off Monday in Chicago with Luke Chandler, chief economist at Deere and Co., offering a look at macroeconomic trends and risks facing producers.

The Summit is celebrating its 13th year of providing farmers with insights on the global economy, as well as risk management and profit strategies for farmers.

Chandler pointed to some of the areas of economic uncertainty in the world, including areas with political unrest, such as Hong Kong and South America, the British exit from the European Union, continued trade disputes and the 2020 U.S. presidential race. Still, Chandler said Deere may see slower global growth, but doesn't see the world economy dipping into a recession.

"We're certainly not in this camp who thinks we're heading into a recession," Chandler said. "Clearly, there is a lot of uncertainty in the world when you see some of these challenges and risks."

Pointing to the U.S. jobs report released last week showing 266,000 jobs added in November, and unemployment at 3.5%, Chandler noted, "There are still a lot of good things taking place in the U.S. economy."

At a record 125 months of economic growth, Chandler said economists continue watching for signs of weakness or slowdown.

"The fact that we're still growing over 250,000 jobs each month and we have such strong labor numbers shows there is still some spark left in the economy despite some issues," Chandler said.

That unemployment rate, though, along with tighter immigration policies, is beginning to stress companies because the lack of available labor makes it harder to keep growing, Chandler said. A lot of businesses are struggling with this and trying to turn to technology to make up for those labor issues, he said.

"There are a lot of areas of the economy where labor shortages are a real challenge," Chandler said, highlighting that that is starting to cause some retraction in business confidence.

Globally, the fundamentals in global agriculture show "more positive signs," Chandler said, because global grain stocks have come down slightly in the past two years as the growth of consumption has outpaced increases in production.

Chandler touched briefly on the U.S.-Mexico-Canada Agreement, which appears to be reaching a possible negotiating conclusion in Congress. According to an International Trade Commission report last spring, USMCA would add about $68 billion in U.S. overall exports when implemented, including about $2.2 billion in additional agricultural exports.

"Obviously, USMCA ratification is going to mean a lot to different customers in different industries," he said.

China's economic situation remains one of the biggest risks for agriculture as the world's largest importer of food. Food inflation is starting to become an issue there as African swine fever has doubled pork prices in less than a year, causing overall food inflation at roughly 23% over the past year, as well, Chandler said.

Soybeans have been the dominant challenge for U.S. farmers in the escalation of trade disputes with China, which has led to greater exports from Brazil to China.

That food-inflation pressure, though, may have prompted Chinese officials just last week to waive tariffs for private importers of U.S. soybeans, pork and other commodities. It's unclear so far just how long China will allow that to happen.

"So is that a goodwill gesture to try to make sure we can try to get a trade deal, or is that being driven by the challenges they have internally to try to control food-price inflation?" he said, pointing to political instability already in Hong Kong and the desire of the Chinese government to keep food inflation under control.

Chandler highlighted that farmers globally are benefitting from the impacts of African swine fever. He noted he was just recently in Europe where swine farmers from Denmark "are essentially exporting everything they can to China and making prices they never dreamt possible" because of pork exports to China. Denmark farmers have a deal with Chinese retailer Alibaba basically to supply as much pork as Denmark can export right now, Chandler said.

Record amounts of prevented planting in the U.S. -- nearly 20 million acres -- have also brought down U.S. corn and soybean production, leading to lower forecast ending stocks for the 2019-20 marketing year as well.

While 2019 was a challenging production year for farmers, the "silver lining" is that "It sets us up for a lot better shape for the carryout stocks as we look ahead into 2020," he said.

The farm income situation "really depends on how you want to paint this picture," Chandler said. The $14 billion in Market Facilitation Program payments, on top of all other agricultural receipts, overall puts U.S. farm income at the fifth highest on record, with $130 billion in overall cash receipts, "which certainly is not a negative story."

Taking out the MFP payments, farm revenue falls to the second lowest in the last decade, though, Chandler said.

Protein production in the U.S. is on a five-year trend of growth for poultry, pork and beef, as global protein consumption continues to grow and those sectors keep seeing higher volumes of exports.

"It comes back to why trade is so important," Chandler said, citing that the bilateral trade agreement with Japan is critical here because U.S. beef has been at a tariff disadvantage going into Japan compared to Australia, New Zealand and Canada. "This is about making sure you are on a level playing field and not disadvantaged."

Regarding crop prices, over the last five years, corn prices, for instance, have kept in a tight range from $3.25 to $4 a bushel roughly 90% of the time. The driver there, outside of a new demand driver, stems largely from growing global crop production, not just in South America, but also in Eastern Europe.

This sometimes diminishes the price increases that producers are accustomed to see with major weather disruptions. But global traders are now able to shift trade routes and pick up grain from elsewhere when weather situations hit.

Moving forward in crop production, Chandler highlighted that Brazil will continue expanding acreage and production. But looking at the demand booms over the past 15 years in China and with ethanol, Chandler asked, "Where is the next demand draw going to come from?"

Economic growth in other Asian countries outside of China provides more opportunities for demand as their gross domestic product (GDP) numbers are some of the strongest in the world. Another possibility for demand sales could come if China becomes serious about a 10% ethanol mandate, he said.

"If we get to a deal and they do implement a national ethanol mandate, then that could be a demand driver that would be advantageous for row crops," Chandler said. 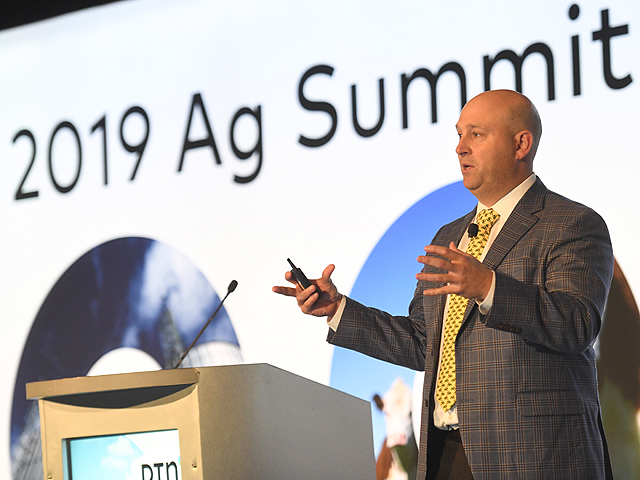