CRESTON, Iowa (DTN) -- The trajectory of rising stars in the Democratic Party right now can seem as fleeting as a shooting star, but right now the candidate on the rise is South Bend, Indiana, Mayor Pete Buttigieg.

A year ago, the rising, youthful, non-establishment Democrat who could talk about bread-and-butter issues with his sleeves rolled up was Texan Beto O'Rourke, who dropped out of the presidential race in October.

In recent weeks, Buttigieg has broken out of the now-18-candidate pack in Iowa. Buttigieg leads in at least one credible Iowa poll as candidates come down to the final two months of stumping until Iowa Democrats gather to caucus on Feb. 3, the first test of the 2020 presidential race.

Buttigieg spent Monday in a swing of town-hall events in southwest Iowa, which generally doesn't draw Democratic presidential candidates as frequently as eastern Iowa because voter registration in more rural western Iowa leans heavily Republican. Still, Buttigieg drew large crowds, such as more than 2,000 people during an evening event in Council Bluffs, which included a large contingent of supporters who crossed the river from Omaha.

While there are undoubtedly some Iowa farmers who are Democrats, the majority of Iowa farmers lean heavily Republican and won't play as significant a role in Democratic caucuses as the state's urban voters.

Despite disputes over issues such as the Renewable Fuel Standard and trade battles with China, President Donald Trump remains popular among Iowa Republicans, especially in rural areas. In fact, according to a Des Moines Register/Mediacom poll earlier this month, President Trump's "popularity has never been higher" among registered Iowa Republicans. The president's job approval rating among Iowa Republicans is 85%, and they are confident he will win reelection.

Roughly three-quarters of Iowa Republicans also back the president's approach to the trade war. Helping shore up support among farmers in Iowa, they also have been among the top recipients of USDA's Market Facilitation Program payments, drawing close to $1 billion in the first round of payments started last year and more than $767 million in the 2019 MFP payments. A second tranche of 2019 MFP payments was scheduled to go out to farmers nationally this week. https://www.desmoinesregister.com/…

Among the diverse and extensive Democratic field, Buttigieg has moved into the top tier in multiple polls, especially in Iowa where a Des Moines Register poll released Nov. 19 showed Buttigieg as the new front-runner. Buttigieg had 25% support in the poll of likely Democratic caucusgoers, with Massachusetts Sen. Elizabeth Warren at 16%, former Vice President Joe Biden at 15%, Vermont Sen. Bernie Sanders at 15%, and Minnesota Sen. Amy Klobuchar at 6%. No other candidate tops 3% support. https://www.desmoinesregister.com/…

Still, in that same Register poll, more Democratic voters believe Biden is more likely to beat Trump than Sanders, Buttigieg or Warren, who fall behind in that order.

Nationally, a CNN poll released Wednesday shows Biden still leading the Democratic field with 28% support, while Sanders is at 17% support, followed by Warren at 14% and Buttigieg at 11%. No other candidate rises above 4% support. https://www.cnn.com/…

Biden suffers from what Democrats are increasingly describing as an "enthusiasm gap" across the state. Last weekend, Biden got an endorsement boost from former Agriculture Secretary and former two-term Iowa Gov. Tom Vilsack and his wife.

"While some may argue that Joe Biden's lifetime of public service is a drawback, I see it as a strength. I see a well-defined candidate, who has withstood the test of time," Vilsack wrote in an op-ed published by USA Today. "I see a candidate who will best stand up to the character assassination attempts that we know are coming. I know Joe Biden to be a good and decent man. I believe a majority of Americans will find that Joe Biden is the person best prepared and best positioned to heal the divisions within our country and to end the 'disorder' of the last three years." https://www.usatoday.com/…

Klobuchar, a three-term senator, is gaining a little more national attention as she campaigned this week in northern Iowa. She is offering herself up as a Midwest moderate, who has actually won statewide races, a shot she made directed at Buttigieg last week on CNN. "That's just not true of Mayor Pete, that's just a fact."

The senator noted in a news release that northern Iowa Democrats called her their "adopted senator" at events this week. In an effort to shore up her standing in Iowa, Klobuchar also plans to spend Thanksgiving doing a service project in the state and having dinner in Des Moines.

In a press gaggle on Monday, DTN asked Buttigieg why America's farmers should put their stock in him.

"I'm serious about supporting America's farmers. We've got a president who talks a good game, but you look at what they did with the RFS standards, you look at the carelessness of the trade war, and what you see, I think, is real indifference to what is going on with American agriculture," Buttigieg said. "You add to that the continuing consolidation of fewer and fewer suppliers to buy from and fewer and fewer places to sell to, and we see how farmers are getting squeezed."

Buttigieg added that farmers and rural America are also central to his platform to address climate change, a topic that garners a lot of Democratic attention but little within the Republican Party. Buttigieg highlighted cover crops and crop rotations. He also talked about increasing wind and solar energy to reduce emissions. Buttigieg references work on climate change as comparable to a "moonshot," referencing the moon landing as a national project.

The mayor told DTN, "I am looking to rural America not only to support a way of life that is so important to us, but also as a solution to a lot of issues looming large in the future. That's why I put supporting farmers at the heart of our climate agenda, not just because farmers are among those with the most to lose if we don't fix the climate, but also because farming could be one of the biggest sources of innovation and growth in decarbonizing our economy."

Every Democrat has their own plan for combating climate change, but health care is the topic that remains a dominant issue dividing Democrats. While Warren and Sanders focus on "Medicare for all," Biden, Buttigieg and Klobuchar each argue for creating a public option that keeps the possibility of private plans.

Buttigieg explained his plan was "Medicare for all who want it," when speaking in Creston, Iowa. "But we trust you to have the freedom to decide if you want it." He added, "We have to have an option that is tied to your workplace."

Even though it's taken a year to build up to the first Iowa votes, the presidential campaign will become a sprint as soon as the Iowa winner is announced. New Hampshire, South Carolina and Nevada come shortly after. And on March 3, "Super Tuesday," 14 states, including the two most populated states in the country -- California and Texas -- will vote in primaries. 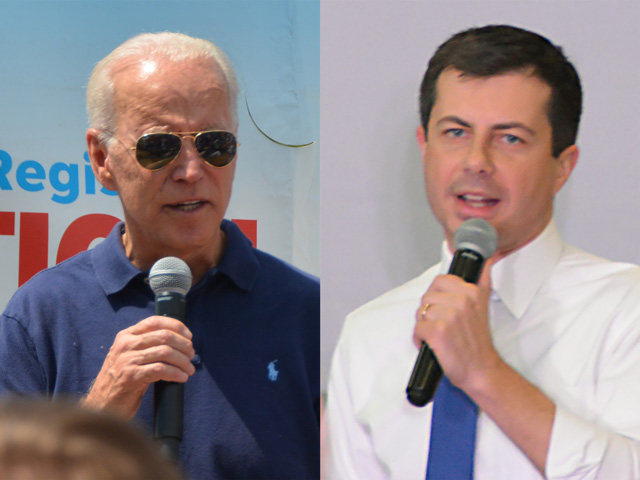