WASHINGTON (DTN) -- Feral hogs are one of the biggest nuisances U.S. agriculture faces with as many as 7 million wild hogs in 37 states causing an estimated $1.5 billion in property damage. The animals also serve as a major vector for foreign animal diseases.

A 2018 farm bill pilot program is now funded for $75 million over five years just to find ways to control feral hogs, according to a hearing about invasive species Thursday held by the House Agriculture Subcommittee on Livestock and Foreign Agriculture.

Rep. Josh Harder, D-Calif., a freshman on the House Agriculture Committee, has made it his task to stop nutria -- also known as swamp rats -- from spreading like feral hogs.

Nutria, which weigh roughly 20 pounds and can produce more than 40 offspring a year, are native to South America but are now found in Louisiana, Texas, North Carolina and other coastal states, including the Pacific Northwest. Nutria had invaded California, but were eradicated in the 1970s there. Over the past couple of years, though, nutria have returned.

The giant rodents have been found across 200 locations in the San Joaquin Valley, said Richard Ortega, general manager of the Grasslands Water District in Merced, California. Nutria can destroy biomass and disrupt infrastructure such as levees because the rodents are known for deep, extensive burrowing. Ortega said a full-scale campaign now to eliminate the rodents could cost more than $5 million a year and take at least seven years. Currently, California officials do not have long-term funding for eradication.

"That's one of my fears if we don't have long-term funding we're going to have a hard time eradicating this outbreak," Ortega said.

Earlier this fall, Harder brought a stuffed nutria to a hearing to highlight the problem and he has introduced legislation to eradicate the rodents. On Thursday, Harder continued his swamp rat campaign with a chart suggesting nutria now are where feral hogs were in the 1980s, largely in a few isolated pockets of the country. Harder wants Congress to spend $7 million to help California eradicate the nutria before the population gets out of control.

"My goal is to make nutria not the next feral hog infestation," Harder said. He warned that by the time nutria become fully known to the public, it might be too late to curb their spread. "By the time public awareness begins, eradication is very unlikely."

Rep. Michael Conaway, R-Texas, ranking member of the full House Agriculture Committee, addressed the issue of feral hogs at the hearing, pointing out that at least $800 million of the estimated $1.5 billion in damage caused by wild hogs every year is tied directly to agricultural losses. Feral hogs reproduce so fast that eradication efforts must kill roughly two-thirds of the wild swine population every year just to keep the population from growing more rapidly.

USDA is just now starting a feral hog eradication program in the Southeast after Congress provided $75 million for eradication projects in nine states.

Josh Gaskamp, a wildlife and range consultant for the Noble Research Institute in Ardmore, Oklahoma, told lawmakers feral hogs are a huge reservoir for animal diseases. That's been shown in both Europe and Asia as feral swine have been considered major vectors for African swine fever. It's a major concern within the U.S. pork industry that ASF could land in the U.S., but also spread into the wild population.

"We won't be able to control African swine fever if it gets into the wild population," Gaskamp said.

Gaskamp testified that feral hogs are generally outsmarting most traps created for them. The smarter ones in a herd don't get captured, then they go off and breed smarter progeny. Gaskamp told lawmakers people have studied a number of poisons for the animals, but it's also important to ensure those poisons do not affect humans or native populations of other wildlife.

Beth Thompson, state veterinarian of Minnesota, focused her testimony on learning from the 2015 outbreak of highly pathogenic avian influenza that led to more than $650 million in economic damage just in Minnesota. At one time, more than 500 responders were working in the state just to deal with the disease.

"The unfortunate thing about the way our hog production is in the United States is there is much more movement of hogs than chickens, turkeys or eggs," Thompson said.

Thompson added, "It's very important when you talk about hog production looking not only within the state, but our systems and hog operations in Minnesota have connections and move pigs and feed and sows and all sorts of things with other states. So we're looking more of a regional approach, so we've pulled in Iowa. But other states within our region [need] to start talking about and working on our plan."

Lawmakers also heard about concerns in the produce industry as port inspectors have become overwhelmed with a larger volume of year-round produce imports. Inspectors can only examine so many containers a day, and cannot be expected to examine every case in a shipment. It costs anywhere from $500 to $1,000 to fumigate one container, but fumigation and higher inspector staffing can be a fraction of the costs to eradicate a foreign insect once it becomes established. Ports have often been the source of invasive bugs such as the Asian longhorned beetle, brown marmorated stink bug and spotted lanternfly. 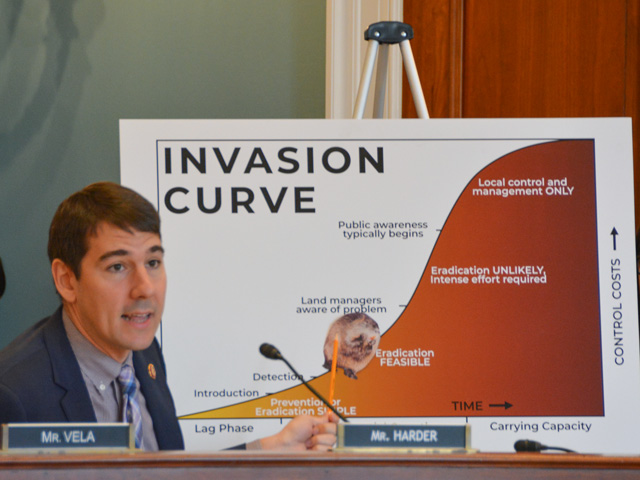