WASHINGTON (DTN) -- The House of Representatives easily passed a continuing resolution Thursday afternoon to keep the federal government operating until at least Nov. 21 and also ensuring commodity and trade-aid payments would go to farmers without delay.

The House voted 301-123 on the short-term funding measure that now goes to the Senate.

While that should have resolved the fight over Commodity Credit Corporation funds used by USDA to pay for the Market Facilitation Program, there was still a fair amount of partisan finger-pointing Thursday morning at a House Agriculture Subcommittee hearing meant to focus on USDA disaster funds.

Rep. Mike Conaway, R-Texas, ranking member of the House Agriculture Committee, chastised Democrats over the possible tie of CCC funds as "shameful." Conaway said Democrats tried to use the funds "as leverage simply because you don't like President (Donald) Trump." He added that the CCC funds in the future are at risk of being held hostage over politics.

"From now on, this process will be a weapon both sides can use," Conaway said. "Shame on us to allow that to happen."

Conaway also split the distinction between threats to delay funds in the continuing resolution to the Republican-led effort in 2012 to limit then-Agriculture Secretary Tom Vilsack's use of CCC funds after Vilsack gave disaster money to Arkansas in 2010 even though the Senate at the time would not pass a disaster bill. Conaway said Republicans at the time restricted "future promises," while this time around, farmers have already been promised funds through the Market Facilitation Program.

Conaway said the continuing resolution placed restrictions on USDA because it will require USDA to produce a report by Oct. 31 detailing how the CCC funds have been used and the analysis USDA used in how Market Facilitation Program payments are being divvied up.

"You guys put this in place, not us," Peterson said. He added, "What's happened ever since is the appropriations waived that provision. This time it became an issue."

Until the dispute over Commodity Credit Corporation funds came up last week, Peterson said, few members outside of the Agriculture Committee had any idea what the fund was or how it works. Peterson also said the initial effort to delay CCC funds came from the Senate, not the House, though Peterson declined to say where that information was from.

"There weren't a handful of members who knew what the CCC was before all of this started," he said. "The president using this for farmers has elevated this thing."

The CCC fund allows USDA to spend up to $30 billion for commodity programs at the discretion of the agriculture secretary.

Shortly later, Rep. Filemon Vela, D-Texas, chairman of the House Agriculture Subcommittee on General Farm Commodities, tweeted a comment that appeared to be directed at Conaway, who led efforts to restrict food stamps for single people when Conaway chaired the committee.

"Our caucus doesn't need to be lectured by a racist Christian pretender who led the effort to starve America's poor. Every Democratic member of this committee championed the efforts to protect MFP in this week's CR negotiations," Vela tweeted.

All the while, Bill Northey, USDA undersecretary for farm production and conservation, waited to testify.

Among Northey's first comments was that sign-up for the Dairy Margin Coverage (DMC) program will be extended from Sept. 20 to Sept. 27 to give dairy farmers more time to enroll for 2019. Currently, USDA figures show slightly under 77% of eligible producers have signed up for the program, and USDA is trying to get as many of those other 23% to enroll as possible. So far, 20,647 dairy farmers have received $276.8 million in DMC payments.

"We have done all that we can and will continue to do so over the next week," Northey said.

Peterson and other lawmakers also had questions about USDA staffing at local Farm Service Agency offices. In 2004, USDA had 11,500 people at local FSA offices, but those numbers have fallen to about 8,400 now. Yet those local FSA offices are being asked to do more because of enrollment in disaster programs and the MFP payments.

Northey said USDA is trying to hire more people as enrollment has begun in the commodity programs -- ARC and PLC -- and signup will also begin soon for the Conservation Reserve Program.

"So we are working to staff up," Northey said. "We certainly have burdened those folks with additional activities.

Peterson said he's aware of major agricultural counties in his district where the local offices are now only open two or three days a week and are using staff from other offices.

"My concern is we don't have the staffing out there that we need," Peterson said.

Northey agreed. "There certainly is no magic bullet in trying to serve all of the needs out there," he said.

Peterson also questioned the USDA hiring process for local FSA offices, saying he understands now that applications have to run through USDA headquarters in Washington where someone approves of the hires.

"I don't understand why we're letting someone in Washington decide who should be hired in a local county," Peterson said. 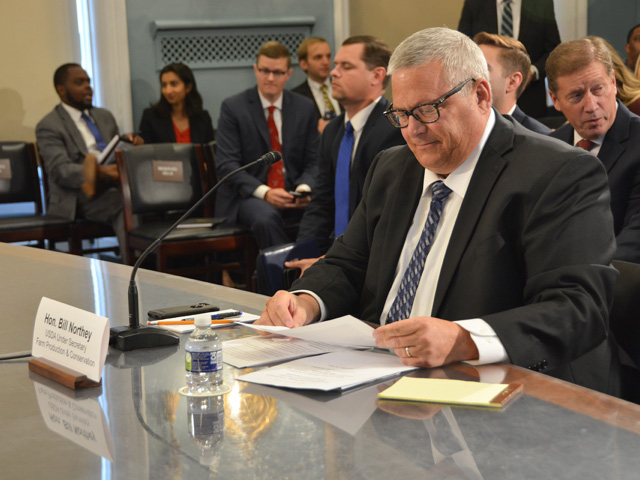