"We want them to be a customer, but we want them to play by the rules everybody else plays by," Perdue told representatives from the fruit and vegetable industries at the United Fresh conference Wednesday morning.

Trade talks between China and the U.S. are starting up again after a summer of tension and increasing tariffs. Earlier this month both countries agreed to delay tariff increases. Chinese officials last week stated agricultural products such as soybeans and pork would not be subject to additional tariffs, for now.

Talking to reporters on Tuesday, President Trump reiterated a talking point he's raised multiple times in the trade dispute by stressing China will buy large volumes of agricultural commodities soon. "They are starting to buy our farm products big league," the president said.

The new marketing year just began for soybeans, but Chinese buyers were prohibited until recently from buying any U.S. beans. Outstanding sales, as of last week, were about 864,000 metric tons, which is 38% below sales at the same period last year. Pork sales, which operate on a calendar year, have reached 237,800 mt of U.S. pork and variety meats from January through July of this year, according to USDA data, a 51% increase from 2018.

While the U.S. presidential election is nearly 14 months away, the president indicated in his comments to reporters on Air Force One that talks with China could last that long. If talks carry on after the election, Trump said he would be a tougher negotiator than now.

The president added, "It'll be the greatest deal ever made and China knows that."

Trump also took a shot at Democratic rivals, saying China would much rather negotiate with former Vice President Joe Biden or Massachusetts Sen. Elizabeth Warren. "If it's after the election, it'll be the toughest deal anybody's ever had to make from the standpoint of China, and they know that. China knows that. China would love to have Sleepy Joe and Elizabeth 'Pocahontas' Warren."

Speaking to reporters Wednesday, Perdue said the U.S. has given China import targets for major agricultural products such as soybeans and pork. Those remain under negotiations right now.

"The targets are everything and as much as they can. They are a huge consumer and they import a lot of their food substances and we think they have got a lot of room to import U.S. products. You know the big ones, we're talking about soybeans and pork. But there are a lot of other things, including things like ethanol and DDGs that would really help our ag economy here," Perdue added.

China is trying to improve its air quality, the secretary noted, "and ethanol can help that."

The secretary cautioned, however, against "being bought off" by some purchase agreements in agriculture without the structural reforms the Trump administration has advocated since the trade dispute began with China.

Southeastern fruit and vegetable growers didn't get a provision they wanted in the U.S. Mexico Canada Agreement to limit Mexican imports at certain times of the year. Perdue noted those growers didn't get the language they wanted, but the USMCA "didn't go backwards on that one either." He said he hoped House Speaker Nancy Pelosi, D-Calif., will bring USMCA to vote sooner rather than later to avoid presidential politics. Perdue said he didn't want to see the trade deal delayed just to avoid giving Trump a trade victory.

"That's the wrong motive in which to vote on a trade deal," Perdue said.

Perdue also said President Trump will meet with some senators from major oil-producing states this week.

"We had a good discussion last week and it's moving along very well," Perdue said. "I know he wants to get it off his plate and I do too. I think we will have a discussion and a decision very quickly on that." 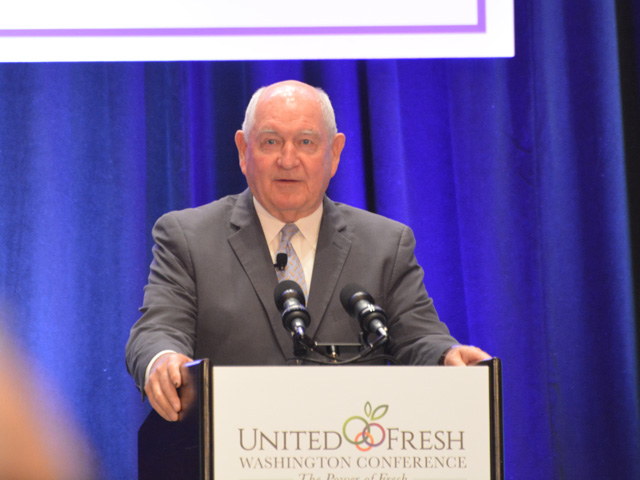