Perdue said Trump is expected to plan a Midwest trip soon -- though no date is set -- and will announce how the administration will offset the 31 refinery exemptions granted by EPA earlier this month.

"We're working really hard to mitigate that as much as possible," Perdue said at a listening session with four GOP Illinois congressmen and more than 200 Illinois farm leaders.

Later, as Perdue was on a stage at Farm Progress Show, he got a call from President Donald Trump and put it on speaker phone. The president did not talk about the small-refinery exemptions but he called farmers "patriots" and said a deal with China would be done "soon."

Trump also said he thought China was delaying talks so Trump would lose reelection and China could negotiate with former Vice President Joe Biden, who is seeking the Democratic presidential nomination.

While stressing he did not want to steal Trump's thunder on any announcement, Perdue noted Trump has authorized year-round sales of E15. There's an opportunity potentially to grow demand for ethanol blends from E10 by as much as 50%, he said.

"If we give the customers the infrastructure and the pumps, and it's going to be a better price differential, let the customers choose," Perdue said.

Going from E10 to E15 everywhere, Perdue said, would increase demand for corn by 2 billion bushels.

"We've got the ability in this country to grow demand for E15 domestically," Perdue said.

The White House plan comes as farmers are struggling with demand challenges both in trade and domestic use. Farmers also have criticized USDA's crop reports, especially after the August crop estimates came in higher than industry expectations. Democrats seeking to defeat the president next year also are seizing on some of these farmer issues. South Bend, Indiana, Mayor Pete Buttigieg, for instance, issued a statement Wednesday saying he would end the abuse of small-refinery exemptions.

"We've got a president who is actively undercutting Iowa farmers in favor of fossil-fuel giants," Buttigieg said. "And he's doing it at a time where his trade war with China is already decimating farmers' bottom line. The president of the United States thinks rural Americans won't notice that he's selling them out. When I'm president, I'll end this administration's abuse of small-refinery exemptions."

Small-refinery waivers came up repeatedly in the listening session Wednesday by farmers and people in both the ethanol and biodiesel industries.

Perdue said EPA Administrator Andrew Wheeler may have taken some comments by the president on one refinery and then plowed through with a full dose of exemptions for ethanol plants.

"The president understood that was way overdone, and we are meeting furiously to try to recover some of that demand destruction that those small-refinery waivers did," Perdue said. "We've had to be very creative legally in order to do that."

Perdue added the president's eventual announcement "has been delicately crafted" and will provide some relief.

Mark Marquis, CEO of Marquis Energy, told Perdue he did not think the waiving of 1.4 billion gallons of ethanol demand could be fixed with some infrastructure funds for blender pumps and the like.

"We really need those gallons that are waived to be reallocated to the large oil refiners," Marquis said.

Marquis added that investors such as himself expected the Renewable Fuel Standard to move forward for 15 years when it was passed, but 10 years later, the petroleum industry has the upper hand.

"It feels like a double-cross to us," he said.

Leaders in biodiesel also called on Congress to push for a return to the $1-per-gallon biodiesel tax credit. The tax credit expired 20 months ago, and one speaker told Perdue at least six biodiesel plants have closed and more than 250 million gallons of biodiesel demand have been lost because of the refinery waivers on biodiesel.

Perdue added his job is to convey the anxieties of producers over trade and small-refinery exemptions to the president.

"He understands that, and we are working feverishly right now to mitigate those issues," Perdue later told reporters.

The secretary said he "has the president's ear," pointing to the $16 billion Market Facilitation Program payments as evidence.

With now 20 million acres of prevented planted, Perdue was asked about when USDA will announce how it will spend $3 billion in disaster aid passed earlier this summer. The secretary said the aid package is tied up at the White House Office of Management and Budget right now, and they are trying to decide exactly how that aid will be spent. USDA expected to have an announcement by Sept. 10. Perdue added that fight "could wind up in the Oval Office as well."

Perdue pushed back on the argument that trade disputes are the only driver for declining crop prices. Crop prices have been falling since 2012, the secretary said, and some of that is due to trade, but also overproduction.

"Yields go up, and we are producing more than we can consume," he said.

Rich Guebert, president of the Illinois Farm Bureau, thanked Perdue for the latest Market Facilitation Program payments, citing that their payments would not make producers whole, but will likely help them get an operating loan for next year. Still, Guebert said, agriculture needs a positive jolt.

"We really need some quick wins to give us a light at the end of the tunnel," Guebert said.

He asked Perdue to ensure Trump does not walk away from the North American Free Trade Agreement while the U.S.-Mexico-Canada Agreement is on the table.

On the USMCA, Perdue said House Speaker Nancy Pelosi, D-Calif., is still trying to ease concerns in her caucus, but the secretary said he thinks the trade deal would get strong bipartisan approval. It's important with other trade issues for USMCA to pass, he said.

"If you can't do a deal with your closest neighbors, how do you expect to get a deal done with others?" Perdue said.

Perdue took umbrage with questions from reporters regarding how long farmers can continue to deal with the uncertainty over tariffs and trade disputes with China.

"The question is, what's China going to do to stop stealing our stuff?" Perdue said. "Maybe you would like to ask China and [Chinese] President Xi [Jinping] what China's going to do to come to the table and trade like the No. 2 economy in the world and trade fairly and freely without the hassling and jerking our producers around. That's the issue. President Trump has thrown the flag on that. Nobody has addressed that."

Perdue added the U.S. has become dependent on China as a consumer, but China is not playing by international trade rules. He pointed to the case of Chinese business people stealing biotech seed corn from Midwest fields and trying to reverse engineer the biotechnology.

"Many people don't understand China having jerked around with biotech issues and things like that," the secretary told reporters. "They want world dominance in food production and military production and really in colonialism across the world." 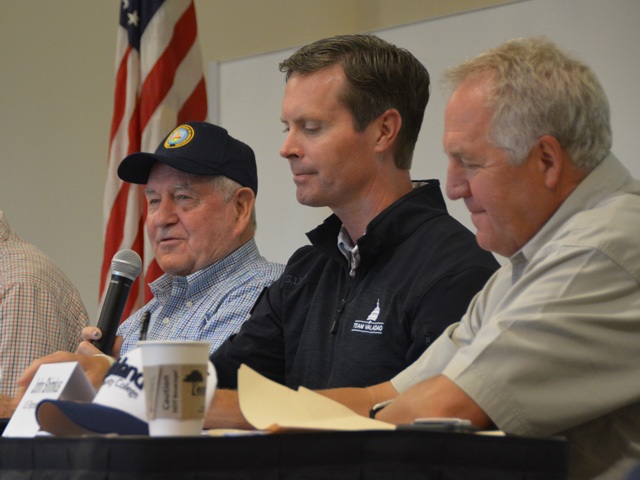