DECATUR, Ill. (DTN) -- While farmers admire the latest agriculture machinery this week, leaders of national commodity groups at the Farm Progress Show are talking about demand and looking for the upside in pending trade deals.

Bill Gordon, vice president of the American Soybean Association and a farmer from Worthington, Minnesota, said of his first day at the show, "You can't start a conversation in agriculture without talking about China and the tariffs on soybeans and what we're trying to do to mitigate that and still sell to our No. 1 buyer of soybeans."

ASA continues to focus on pushing the Trump administration on trade and demand issues, Gordon said. At the same time, ASA continues to send farmer delegations to China to talk to private soybean buyers.

"We still need trade, not aid," Gordon said. "We appreciate the administration's help with mitigation payments, but that's not a long-term solution. We've been in this market for 30-plus years, and we built it from the ground up. We're not going to stop and let the government get in the way of trade in our mindset."

ASKED FOR MEETING ON WAIVERS

On small-refinery waivers, ASA and the National Biodiesel Board have reached out to President Donald Trump, asking for a meeting to discuss how the waivers have affected biodiesel demand.

"Percentage-wise, biodiesel has taken a larger hit on the volume of our product," Gordon said. "Those are just gallons -- demand. When you have a trade war and trade barriers in place, that demand needs to be picked up domestically."

Gordon credited Agriculture Secretary Sonny Perdue for his efforts to try swaying the president and EPA Administrator Andrew Wheeler to change direction on the small-refinery exemptions.

"He really has been a voice for agriculture in that office," Gordon said. "He just can't seem to get it across the finish line that it's important to farmers."

Perdue will attend the show on Wednesday and hold an event with farm broadcasters as well as hold a roundtable discussion in Decatur.

Kevin Ross, vice president of the National Corn Growers Association, who farms near Minden, Iowa, spoke at an ethanol plant in Council Bluffs, Iowa, back in June and brought the small-refinery exemptions to Trump's attention.

"We need to get some immediate demand in this ethanol market," Ross said. "A lot of plants are struggling, or have shut down, and if we don't find some ways to bolster that demand soon, this is going to be a big problem for a lot of farmers markets that they are normally going to."

Ross, though, said corn farmers should be excited about the prospects of reaching a trade deal with Japan in the near future. President Trump over the weekend announced the U.S. and Japan had reached the framework of a deal that would include more agricultural exports.

"There's a lot of high-end value there with beef and pork," Ross said. "There are a lot of dollars there that went to other products that use corn. That is certainly a place we want to take care of as a trade partner."

China also isn't far from discussion at the show.

Stephen Nicholson, vice president of research, food and agribusiness for Rabo AgriFinance, said the one issue everyone has been expecting is China will have to buy more pork because of African swine fever.

China is buying more pork right now from Spain, Germany, Canada and Brazil than from the U.S., Rabobank recently noted in a report, though sales from the U.S. to China have steadily risen throughout the year. Pork prices are now rising in China and increasing the prices of other proteins there as well.

"Pork prices in China are escalating very quickly," Nicholson said. "They have moved up over the past few months, and I do expect we will see pork prices move up quite a bit."

Because of U.S. production and higher domestic prices, Nicholson said he thinks China will have to eventually buy more from the U.S.

One area where China is making up for the loss in pork production is in aquaculture, Nicholson said. Seafood, eggs and poultry products have all increased in production, but seafood is the area with the most growth.

"Their aquaculture is a huge, huge production machine for them, and they are going to continue to ramp that up," Nicholson said.

Another disadvantage the U.S. has currently in exports is the strong dollar, Nicholson noted.

"The dollar continues to be strong against all of our agricultural competitors, whether it is the peso, the real or the ruble. As long as those currencies remain weak against the dollar, it makes them just that much more competitive," Nicholson said.

Ross is expecting farmers to gear up for a fall push for Congress to approve the U.S.-Mexico-Canada Agreement to get one key trade agreement in the books and stabilize the tariffs and North American agricultural trade.

"Hopefully, a lot of farmers pick up the phone and call across the country when that does drop because we're going to need a lot of people to be vocal on that when [House] Speaker [Nancy] Pelosi does decide to hit the floor on that," Ross said.

Farmer sentiment right now is "all over the board," Ross said, "But certainly more negative than positive in most cases. It's difficult. Farmers in most cases are trying to eke out a profit. There have just been a lot of factors that have pushed negatively on the marketplace. It's causing a lot of struggles."

Ross added, "We've seen a lot of outside factors coming into things that I don't think anybody foresaw, especially these trade issues going on as long as they have."

Gordon's area of Minnesota had a lot of prevented planting acres this spring, and Gordon said farmer sentiment already is turning to worries about operating loans for next spring's crop. The Market Facilitation Program payments will help now, he said, but there won't be crops in the bin to help with cash flow next spring or summer.

Gordon does tax accounting work and frequently talks to both bankers and farmers.

"They are really worried about working capital, and they have kind of let it go for a couple of years," because of large crops, Gordon said. "This time, I think there are a lot of farmers who aren't going to be able to get financing this year."

The challenges getting financing could actually translate to more soybean acres next spring, Gordon said. It could be harder to get enough financing to plant a corn crop, but producers might receive enough credit to plant a soybean crop, he said. 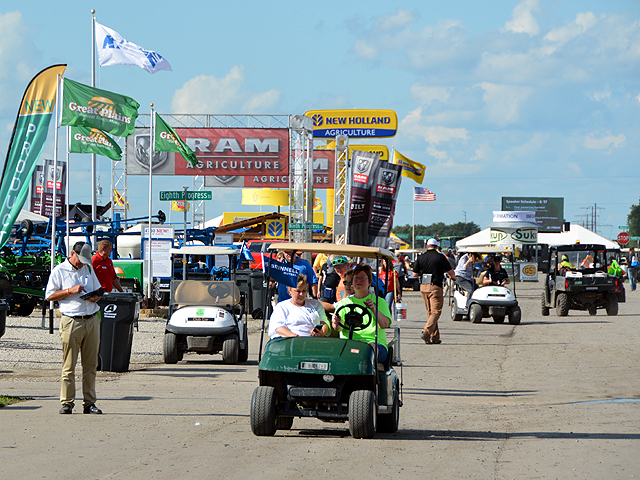