Two months ago, Mike Jerke was standing next to President Donald Trump at Southwest Iowa Renewable Energy as the president championed year-round E15. On Wednesday, Jerke, CEO of the 130-million-gallon ethanol plant, was standing next to a congresswoman calling for a federal investigation into EPA's 31 new small-refinery waivers. Trump had promised to preserve and protect the Renewable Fuels Standard, Jerke said.

On Tuesday, EPA stated to Reuters there "is zero evidence" that granting small-refinery exemptions "has had any negative impact on domestic corn ethanol producers," Reuters reported, quoting an email from an EPA spokesman.

Jerke said EPA's 31 waivers would translate into 300 million bushels of lost corn demand. He added that the EPA's unchecked use of small-refinery waivers "guts the RFS and breaks the president's promise."

The Aug. 9 waiver announcement, the China trade war and USDA's Aug. 12 crop report have combined to take potentially $10.6 billion of wealth from farmers and ethanol plants and transferred it to oil companies, Jerke said.

Rep. Cindy Axne, D-Iowa, on Wednesday called on the Environmental Protection Agency's Inspector General to investigate EPA's rationale for granting the small-refinery waivers. Axne said EPA's actions "eliminated millions of gallons of ethanol that had been obligated to sell."

Iowa Gov. Kim Reynolds and Iowa Secretary of Agriculture Mike Naig sent a letter to EPA Administrator Andrew Wheeler on Wednesday asking him to reallocate ethanol gallons lost to small-refinery waivers to the Renewable Fuel Standard and to increase transparency in the program.

As the president reportedly considers options in response to a rural backlash to Trump ordering the approval of 31 new waivers for 2018, Reynolds and Naig said the latest round of waivers was a "clear violation of the president's commitments to Iowa farmers and renewable energy producers across the Heartland."

They said in the letter the "damage from these exemptions has piled up year after year and gallon after gallon. Over the last three years, the agency has undercut more than 4 billion gallons of homegrown energy, without transparency or accountability, even for so-called small-refinery exemptions offered to oil giants like Exxon and Chevron."

Sen. Chuck Grassley, R-Iowa, was more direct last week when the small-refinery waivers were announced by EPA. "They screwed us," the senior senator said.

Ethanol supporters say EPA also is refusing to comply with an earlier court order to reallocate 500 million gallons of waivers from earlier years. Jerke said those gallons should be put onto the 2020 mandated ethanol volumes for refiners.

Tensions are high right now in agriculture. Bruce Rohwer, a northwest Iowa farmer and board member for the National Corn Growers Association, said farmers are facing five years of stagnant prices and are watching their markets lost through different government actions in trade and ethanol waivers.

"It just piles on," Rohwer said. "The frustration has been the EPA's failure to follow the courts. EPA to this point has just ignored that. It leaves a frustration of how do you work with a government agency that won't recognize the authority of the courts? I don't have the answer for that."

"You have to keep knocking and keep talking and keep pointing out the economic consequences of not having good markets, because it's serious," Rohwer said. "It must change."

The 31 waivers displaced 1.4 billion gallons of required ethanol volume for the refiners. Since the Trump administration took office, EPA has granted about 4 billion gallons in waivers. EPA has not reallocated waived gallons to other obligated parties to the RFS since at least 2016.

The RFS allows the EPA to issue small-refinery exemptions for refiners that process 75,000 barrels (around 3.15 million gallons) or less of petroleum a day and demonstrate "disproportionate economic hardship."

Poet, one of the nation's largest ethanol producers, on Tuesday said it would idle a 92-million-gallon plant in Cloverdale, Indiana, in response to EPA's waivers. Poet had already cut production at some of its other plants in Iowa and Ohio as well. Jeff Broin, Poet's CEO and chairman, said the company had been hurt by EPA's decisions on the Renewable Fuels Standard.

Jeff Jorgenson, a Sidney, Iowa, farmer and board member for the Iowa Soybean Association, said at the Council Bluffs event that soybean farmers would gain some further stability if Congress would reauthorize the $1-a-gallon Renewable Biodiesel Tax Credit. The tax credit expired nearly two years ago and six biodiesel plants have closed since then while Jorgenson said others are running at just 50% capacity.

Geoff Cooper, president of the Renewable Fuels Association, lashed out at EPA's statement, stating at least 15 plants have shut down or idled since EPA began issuing large volumes of small refinery exemptions last year. Meanwhile, the waivers have reduced corn use by 225 million bushels.

"Farm bankruptcies and debt are on the rise, and farm income is plunging," Cooper stated. "Yet, EPA pretends nothing is wrong. Rome is burning, while EPA plays Nero's fiddle."

Other Iowa Democratic members of Congress Reps. Abby Finkenauer and Dave Loweback also called for an investigation by the Government Accountability Office into the small-refinery waivers. Growth Energy praised the congressman for the move.

"Already, dozens of biofuel plants have closed or cut production, and hundreds of millions of bushels of grain are falling in value, just as farmers face the worst economic conditions in a generation," said Emily Skor, CEO of Growth Energy. "The EPA needs to account for these lost gallons immediately and start repairing the damage before more rural communities lose hope for a comeback." 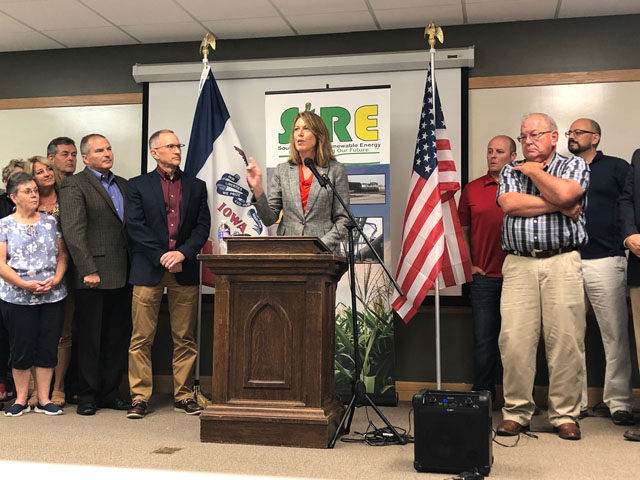