DES MOINES, Iowa (DTN) -- The Iowa State Fair offers Democratic presidential candidates a chance this week to stump before a crowd and try to generate some momentum, if they can avoid a gaffe while in the state.

Former Vice President Joe Biden walked into a gaffe Thursday evening when he misspoke, saying "poor kids" are just as bright as "white kids." Biden found himself trying again to explain that statement.

Biden, though, also told Iowans during a stump speech on the Des Moines Register State Fair Soapbox that he would get rid of a popular tax break that helps farmers and other landowners pass assets onto their children.

More than 20 presidential candidates are expected to speak at the soapbox during the Iowa State Fair, which included five just on Friday. As many as 17 Democratic candidates will also speak Saturday at a forum on gun violence in downtown Des Moines.

Candidates are combing the rest of Iowa as well. Minnesota Sen. Amy Klobuchar spent much of week talking about "bread-and-butter issues," attempting to increase her poll numbers by rolling out an agriculture and rural policy plan. She criticized the trade disputes between the Trump administration and China.

"I think there has not been enough focus on rural issues and rural America. Rural America is hurting right now because of the tariffs, as you all know," Klobuchar said late Wednesday at a Northwest Iowa farm. The senator added, "I've been very distraught over what is happening with our soybeans with these tariffs. A lot of these contracts are being given to farmers in other countries, and it's going to be very hard to get that back."

Klobuchar, 59, hoped her Minnesota background and senior status on the Senate Agriculture Committee would connect with Iowa voters. The senator said she has been frustrated about the lack of rural issues in Democratic debates.

"There has not been one question in the debates about farming. There was one question about trade, and so I've been kind of goading ... It's just been very frustrating at this point."

Sitting with Klobuchar on his farm, Dan Sorenson told the senator one reason President Donald Trump has so much support among farmers is that few presidents have ever mentioned or talked about farmers as much as Trump.

"It's the first time in my lifetime a president has talked about farmers," Sorenson said. "He has worked with them and talked to farmers, and that's why they are voting for them. That's why they support him."

At the state fair on Thursday, Montana Gov. Steve Bullock, another candidate with low poll numbers, began his stump speech by tying his family history to Iowa, noting his family originally settled in the state in 1850, and his mother was born in Ottumwa, Iowa. This week marks Bullock's eighth trip to Iowa, though right now he barely registers in most polls.

Bullock, 53, pointed out that the Iowa caucuses were 178 days away and would narrow the unwieldly Democratic field down significantly. Bullock challenged Trump's character, saying American children watch and hear how the president acts.

"We expect more out of our preschoolers than out of the president of the United States," Bullock said.

Taxes were also a big deal, as Bullock cited the "crony capitalism" that revolves around Trump's tax policies. "Whoever tears down this stage tonight will pay more in taxes than Amazon, Chevron and 60 Fortune 500 companies," Bullock said. "Folks expect more."

Biden, 76, also challenged Trump on taxes, saying the only people who are reaping large rewards in the country under Republicans are stockholders, because stockholders are perceived as the only job creators.

"Folks, the idea that we don't reward work as much as wealth is bizarre," Biden said. "We're in a situation where the top 1% are paying a lower tax rate than you do because of capital gains ... It's ridiculous. We should be rewarding work, not just wealth."

Biden then attacked a tax benefit most farmers use to pass on their property to the next generation. Biden criticized stepped-up basis for assets, largely talking about wealthy stockholders. Biden said he would eliminate the stepped-up basis, saying it would generate $17 billion to pay for community college and worker training.

"Eliminate one single little thing, it's called stepped-up basis," Biden said. "I didn't know what it was because I used to be listed as the poorest man in Congress. I didn't understand it. What happened was if you have a capital gain and you are about to cash it in and you get hit by a truck, God forbid, you leave it to your son or daughter, they pay no tax."

Stepped-up basis typically assures farmer families who inherit land and equipment also receive basis on the higher value of that property. They then would pay lower capital gains taxes if they sold the property.

Bullock criticized the money in politics that he argues is pushing Republicans to cut taxes while the federal deficit reaches $1 trillion, and is causing the GOP to reject climate science to appease the fossil fuels industry.

"Everybody has to have that fair shot at the American dream, and that's not true right now," Bullock said. "So we need to beat Donald Trump and make sure our economy in Washington, D.C., works for all of you."

Bullock said of a comment from an Iowa farmer, "Every time Trump tweets, we lose hundreds of thousands of dollars."

The Montana governor also said helping the next generation isn't just about making college more affordable, citing roughly seven out of 10 Americans do not have college degrees. More attention is needed on trade schools and apprenticeships.

"What are we doing for them?" Bullock asked.

Health care remains a divide within the Democratic Party, as both Bullock and Biden highlighted. They criticized more expensive plans proposed by fellow Democrats.

"We can make health care accessible and affordable for all, but we don't have to disrupt 165 million people on private health insurance," Bullock said. "We can have a public option and finally negotiate lower drug prices."

Biden said of health care that he will continue to build on the Affordable Care Act and protections for preexisting conditions and create a public option.

"I can make sure every single solitary person in the country has adequate health insurance, build on Obamacare, making sure it has a public option, and increase the prospect of lowering drug prices."

Pete Buttigieg, mayor of South Bend, Indiana, also released a rural health care plan on Friday that included a "Medicare for All" option and would recruit more physicians to rural hospitals.

On climate, Biden said he would rejoin the Paris climate agreement on the first day of his presidency. Biden noted the U.S. is responsible for 15% of global warming, while the rest of the planet is responsible for 85% of emissions.

"I heard a farmer today on TV, who's a Republican, said, 'I don't think it's caused by humans, but I have a problem,'" Biden said.

Biden later pointed to Iowa's wind energy -- the state draws more than 30% of its power from wind turbines -- adding the industry has created 10,000 jobs.

"It didn't cause any cancer as the president said. It generated growth," Biden said. He then added, "Your farmers out here can have an entire new life. They can be the first group of Americans to have a carbon-free life that they generate."

Bullock too said he would rejoin the Paris agreement and "do what the original conservationists, our farmers, are doing," and "invest in the opportunities to get to the point we are carbon neutral."

Despite the focus on Democrats at the fair, an unofficial corn kernel poll by a local TV station still showed that President Trump was far ahead among fairgoers compared to the entire Democratic field. 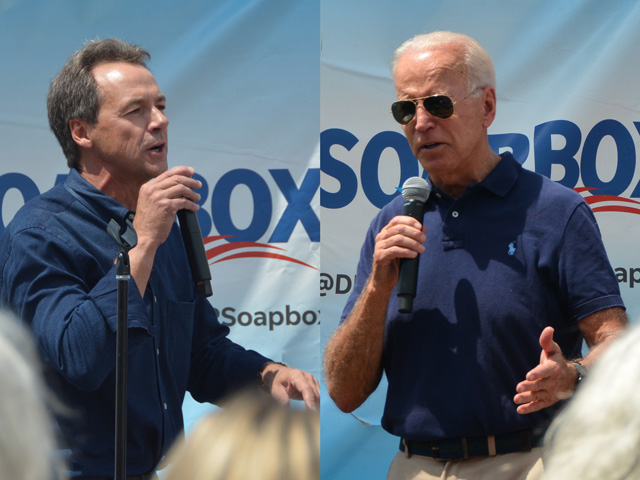