DES MOINES, Iowa (DTN) -- As Democratic presidential candidates traipse through Iowa talking about their plans to address climate change, a mixed group of farmers and biofuel advocates are stressing the role agriculture can play as a solution.

Matt Russell, executive director of Iowa Interfaith Power and Light, also operates Coyote Run Farm with his husband near Lacona, Iowa, where they raise produce and grass-fed beef. Russel also has become one of the more vocal advocates among farmers in Iowa getting the message in front of candidates to incentivize farmers to sequester carbon. Russell's profile was raised in May when he testified before a House Select Committee on Climate Crisis.

Russell said he thinks farmers should be leaders in climate discussions.

"Farmers are so well positioned," Russell told DTN. "Nobody is as well positioned to do this as American agriculture. And it is ours to lose. As a person of faith, that is a great moral failure to have all of those gifts in our wheelhouse to be able to help solve the most pressing problem potentially in the history of humanity, to have the ability to have such a potential impact on an equitable, science-based democratic solution."

Russell is engaging with Democratic presidential candidates, including bringing former Texas Rep. Beto O'Rourke to his farm. During the first Democratic debates in late June, candidates were asked about climate change. Both O'Rourke and South Bend, Indiana, Mayor Pete Buttigieg highlighted farmers as "part of the solution" to climate change.

Through Iowa Interfaith Power and Light, Russell holds meetings around the state about the role of faith in acting on climate change. He's also actively recruiting other farmers to talk about climate change and consider the value opportunity in getting paid to sequester carbon in the soil.

Conversations about carbon sequestration are picking up in different circles. In the Southern Plains, the Noble Foundation is working on a carbon sequestration protocol. Indigo Ag, a company focusing on microbiology and digital agriculture, launched the "terraton initiative" in June to remove 1 trillion metric tons of carbon dioxide from the atmosphere through soil sequestration.

Ethanol supporters are also tying into the Democratic focus on climate change, looking to heighten understanding compared to the 2016 election. A focus with candidates this time is to demonstrate how much Iowa has invested in advanced biofuels, but also pointing to the positive aspects of corn ethanol as well.

"Four years ago, we could not get Hillary Clinton to say the word 'ethanol.' We sure as heck could not get her to say 'corn ethanol,'" said Monte Shaw, executive director of the Iowa Renewable Fuels Association. "All she would say in her talking points was 'advanced biofuels.' And it was concerning, to be honest with you, because Iowa makes a lot of corn ethanol."

A USDA study on ethanol (https://www.usda.gov/…) released at the end of the Obama administration, "A Life-Cycle Analysis of the Greenhouse Gas Emissions of Corn-Based Ethanol," showed corn-based ethanol has 43% lower greenhouse gas emissions than gasoline, based on an energy equivalent basis.

The study looks at two views of the future, including a continuation of current trends, which would achieve that 50% reduction. A more ideal case looks at the most efficient ethanol plants and universal adoption of soil-health practices and nutrient management plans. That idealistic outlook could push ethanol to a 76% reduction of greenhouse emissions compared to gasoline.

A coalition of groups has created Biofuels Vision 2020 to gauge and track candidate positions on ethanol and other biofuels.

Shaw was concerned leading into this year that Democrats wouldn't view the value of biofuels in a low-carbon energy future. Instead, most major candidates have embraced the message.

"It has been a lot easier this year to get these candidates coming to Iowa to see that and to embrace it," Shaw said. "I actually feel like we're miles ahead of where we were at this point four years ago."

Shaw noted Democrats recognize they need to bridge the conversation with rural America, where President Donald Trump won his presidency in 2016.

President Trump's administration has a mixed record on ethanol. The president championed year-round E15 sales, and the Environmental Protection Agency got that rule approved this spring. Yet, since the Trump administration began, EPA also has granted refineries exemptions for roughly 2.6 billion gallons of ethanol, which has been a thorn in the side of biofuel advocates. EPA right now has 39 such applications from refiners seeking to receive exemptions from 2018 Renewable Fuel Standard obligations.

Iowa State Sen. Rob Hogg, a Democrat and a co-chairman for Biofuels Vision 2020, has talked with Russell about candidates better connecting agriculture and climate solutions. That's a different attitude and shifts the conversation away from trying to blame agriculture for its emissions.

"I think everybody recognizes farmers are a big part of the solution, not just in renewable energy production in terms of biofuels or wind power or solar power, but in terms of land management practices that build the carbon content of the soil and retain nutrients, and making sure that farmers are getting compensated for the conservation practices that provide ecological solutions," Hogg said.

Hogg represents Cedar Rapids, which suffered $5 billion in damages from flooding in 2008 and losses in a 2016 flood as well.

On Thursday, Hogg hosted New York Sen. Kirsten Gillibrand who rolled out her 10-year, $10 trillion climate change "moonshot" to try to boost her lagging campaign. Gillibrand's plan would tax carbon emissions at $52 a ton and invest $200 million in renewable energy.

"Biofuels is a huge economic opportunity, not just for Iowa, but for the whole country," Gillibrand said. "We want to make sure we invest in our biofuel producers, giving them money for research and development so they can do next-generation biofuels."

Laura Krouse, a vegetable farmer who owns Abbe Hills Farm and is a Linn County Soil and Water Conservation commissioner, told Gillibrand some farmers have slowly changed their perspective on how and why climate change is happening. Farmers are not only dealing with more extreme weather events, but also warmer summer nights and humidity, which have led to more pests and diseases, as well, she said.

"Farmers, like many people, resist change," Krouse said. "But we have got to have some cultural change real fast and technology change real fast. And the way to make that change happen is to incentivize the things that will work to accumulate carbon in the soil and help rural communities survive."

Though she is a member of the Senate Agriculture Committee, Gillibrand also criticized the farm bill, and in particular crop insurance, calling it a "disgrace" that crop insurance companies are guaranteed a 12% profit margin in the farm bill. Crop insurance drives farmers to grow commodity crops rather than fruits and vegetables, she said.

Gillibrand said more investment is needed in areas such as soil health and more diverse crops.

"I think most farmers are very well aware how severe weather has harmed their industry, and I don't think they are climate [change] deniers," Gillibrand said. "They may not know the cause of it, but they know the flooding that has drenched their cropland and covered it with sewage and fuels and made it unproduceable, they know that was caused by flooding." 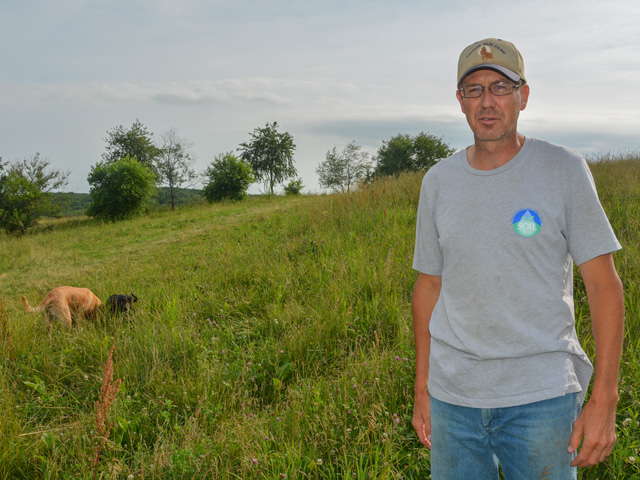