VERNON CENTER, Minn. (DTN) -- The latest round of Market Facilitation Program payments will inject some needed cash into the rural economy starting next month, but farmers continue to watch and wait for better trade opportunities.

Kevin Paap, president of the Minnesota Farm Bureau, talked about Thursday's announcement of MFP payments while having a quick breakfast with other area farmers and high-school classmates Friday morning at the D Bar 169 in Vernon Center.

Farmers in Blue Earth County, Minnesota, will receive an average of $74 an acre. Statewide, the average payment rate in Minnesota is closer to $55 an acre, according to an analysis by the American Farm Bureau Federation.

"The payment rate in Minnesota looks pretty good. We have a few discrepancies in some counties, but not as much as last time," Paap said

Paap added, though, that Southwest Minnesota saw a significant amount of flooding this spring and prevented-planting insurance claims. Those producers will not receive an MFP2 payment unless they planted cover crops. Even then, the payment is capped at $15 an acre.

USDA announced details Thursday for MFP2, which will provide up to $14.5 billion in aid to producers. Enrollment will start on Monday, July 29, and continue through Dec. 6. Farmers who sign up early could receive payments as early as mid-August. The initial round of payments will be $15 or capped at 50% of a county's full payment rate.

The payment rate for each county can be found at https://www.farmers.gov/…

Under the first MFP payments that began last fall, farmers have received roughly about $8.5 billion. What differed in that program was the way payments were calculated. Last year's MFP payments were broken down by commodities, with soybeans getting the lion's share of payments. This year's MFP2 will be paid on a county rate.

A county's payment rate is based on the number of reported planted acres in the county of major commodity crops. A farmer's individual payment will be based on planted acres, though the payment cannot be based on any more acres than were planted in 2018.

President Donald Trump drove the creation of the MFP2 -- following last year's program -- after talks collapsed between the U.S. and China in mid-May. Trump had come to Minnesota on tax day, April 15, to talk about his economic agenda. At the time, it looked like the U.S. and China were close to a trade deal, Paap noted. After hearing the optimism on that point, Paap said a lot of farmers chose then to keeping holding soybeans, expecting a price rally. Paap said that decision probably ended up hurting producers. Paap also keeps a clock on his phone showing it was 73 days since the president and his team came to Minnesota and promised a quick resolution with China.

"Trump is more of a lightning rod and people can get pretty divided over trade right now," Paap said.

Clark Cornish, 30, who grows corn and soybeans with his father and brothers, farms right next to Paap's ground. The $74 an acre will provide a welcome relief, he said. He noted soybean basis right now is 50 cents under the August futures.

"It should help a lot, especially with the low bean prices right now," Cornish said. "The corn prices are pretty good, but beans are pretty bad right now."

Local farmers had more questions about how MFP payments were calculated, as well as the sign-up process that will begin Monday. They also largely remain supportive of President Trump.

"I think there's quite a bit of support for Trump around here," Cornish said. "I would just like to see a trade deal get done."

Given the number of hogs in the area, Paap also pointed to the $11 per-head market payment for hog producers. Under the program, farmers will receive payments based on hog inventory owned by the producer between April 1 and May 15.

"We have got a significant amount of guys with their own pigs," Paap said. "That's going to help a lot."

An analysis of payment rates by county done by the American Farm Bureau Federation can be found at: https://www.fb.org/… 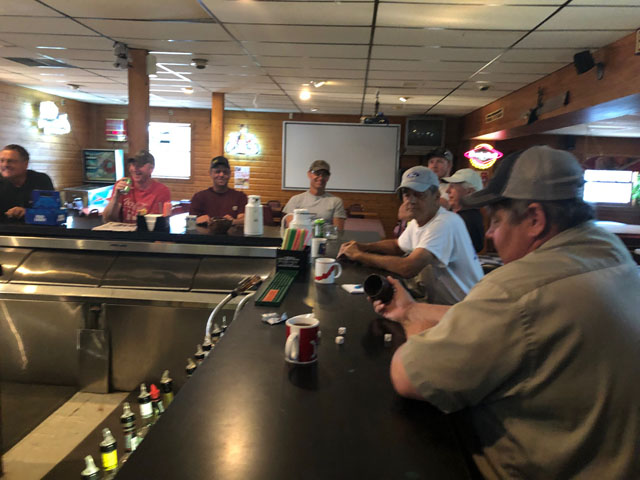