OMAHA (DTN) -- A year since the U.S. and China began a tit-for-tat of tariffs, talks and tweets, American farmers are seeing more diversified export routes while waiting for their largest customer to fully return.

The shift was dramatic as the country's top U.S. agricultural export market fell back and President Donald Trump's administration committed billions of dollars to help farmers make it through the tariff dispute.

The tariff battle over the past year has forced U.S. exporters to redirect their focus away from China, which had been the dominant growth market for agricultural exports for more than a decade. In 2017, China imported $23.8 billion in U.S. agricultural products. It was the No. 1 market for soybeans, feed, animal hides and alfalfa; No. 2 in hay; No. 3 in dairy, poultry and pork.

John Heisdorffer, an Iowa farmer and chairman of the American Soybean Association, said he didn't expect to be holding an anniversary for the tariffs. "I actually thought by fall we would have this settled. I never dreamed it would be a year later and really not a lot closer than where we were then."

The U.S. and China kicked off $34 billion of new tariffs each on July 6 last year. The tariff put a 25% penalty on Chinese importers of U.S. soybeans.

The U.S. government has spent $8.58 billion on U.S. farmers under the Market Facilitation Program (MFP) with a commitment to spend another $16 billion starting later this month.

After last weekend's G-20 summit, President Trump said talks between the U.S. and China are restarting. White House trade adviser Peter Navarro told CNBC on Tuesday the talks remain complicated. Navarro also reiterated that China would be buying more agricultural products during the talks. According to CNBC, Navarro said the agricultural purchases would be "immediate" and "significant."

The trade dispute, which began over the U.S. trade deficit and Chinese theft of intellectual property from U.S. businesses, has become increasingly complicated. Trade tensions now revolve heavily around how the U.S. treats Huawei Technologies Co., a high-tech company serving global broadband networks. China wants the Trump administration to drop sanctions against Huawei while the U.S. is trying to restrict Huawei's access to U.S. businesses working on 5G data networks. Republican senators Marco Rubio and Rick Scott of Florida both tweeted over the weekend that trade talks with China should not lead to easing sanctions against Huawei.

"President Trump needs to stand strong against Huawei and stay consistent in making sure they have ZERO access to the U.S. market," Sen. Scott tweeted Sunday. "It's clear that Huawei has the capacity and the desire to steal our private information and use it against us."

Soybean exports to China fell from $14 billion in 2017 to $3.1 billion in 2018, reflecting why soybean farmers got the lion's share of Market Facilitation Program (MFP) payments.

Jim Sutter, chief executive officer of the U.S. Soybean Export Council, noted soybean exports haven't replaced market share lost with China, but about 40% of that volume has been substituted with other markets.

"Clearly, there's not any single market that can replace China," Sutter said. "It takes a whole combination of markets to be able to try to do that."

Agriculture Secretary Sonny Perdue maintains one of the reasons the tariff dispute hurts farmers is U.S. agriculture had become too reliant on one large customer as sales to China grew.

"We love them as a customer, although I have told you all we got too dependent over there," Perdue said last week in Iowa. "They were an easy customer, they were easy to sell to, and we probably let them have more of our soybeans than they should have. We need to be developing other markets all around the world. That's exactly what we're doing."

Sales have picked up to Mexico, Kenya, Egypt, Thailand, South Korea and, surprisingly, Iran. The European Union overall, though, has increased soybean imports from 4 million metric tons to 7.2 mmt over the past year, largely as Brazilian soybeans have moved almost exclusively to China.

"We've probably in rough numbers doubled our market share in the EU, going from having about 35% market share to about 70% of the market share," Sutter said.

Sutter noted China so far is keeping with a February commitment to buy at least 10 million metric tons (mmt) of soybeans. As of June 20, China had imported 8.2 mmt with 5.6 mmt of outstanding sales still on the books. That remains a far cry from the 27.4 mmt China bought in the 2018-19 crop year.

"They are whittling through their open purchases. I was afraid they might cancel all of those, but they didn't, and they continue to ship every week," Sutter said.

Once the tariffs are lifted, Sutter said he's confident trade with China will pick back up. China wants to have access to both North America and South America to buy at different points in the year. "I think they would really like to have the flexibility to purchase from both of those origins."

Another downside of the trade war, though, is other countries such as Russia are expanding their soybean acres, beyond Brazil, which is already an export powerhouse.

"During this whole trade war thing, we kind of awakened them (Russia) and we encouraged the Chinese to try to figure out how they could source from other places, which is not good. I wish we didn't have to go through that."

Soybean stocks reported by USDA were a record 1.79 billion bushels, up 47% from a year ago with on-farm stocks at 94% above last year's stocks.

Nick Giordano, vice president of global government affairs for the National Pork Producers Council, explained at an industry event last month that the 62% tariff on U.S. pork is hindering sales of pork at a time when the U.S. could be losing a historic sales opportunity to China because of African swine fever. Before the retaliation began, U.S. pork tariffs were 12%.

Giordano said, "The question U.S. farmers are asking is: 'Will we get the main course, or will we get the crumbs off the table?'"

Dermot Hayes, an economist at Iowa State University, pegs pork losses due to Chinese tariffs at $8 per head, or about $1 billion over a year.

Still, U.S. pork prices have moved upward this spring due to greater expectations for even more sales to China, of which many were hogs slaughtered early. Pork prices also are rising in parts of Europe and Brazil as China is expected to consume its own early slaughter volume and frozen stocks.

"With the whole mix of things going on and political overtones, where do they source pork from, if and when they really start stepping up imports in the next six to eight months?" Dale Durchholz, principal for Grain Cycles, said on a call with other economists in late June following USDA's Quarterly Hogs and Pigs report. "We could see the whole flow of pork in the world change not just because of ASF, but also the political repercussions the Chinese have both here in the U.S. and Canada and some others as well."

Erik Oberbroeckling, a member of the Iowa Farm Bureau who joined a tour of China in late March, said at an IFB conference last week, "Discovering the truth about China can be very difficult. The data is suspect."

Oberbroeckling explained the tour group heard several different scenarios on ASF in the country, with some organizations downplaying any concerns and maintaining ASF is under control. Despite culling as much as one-third of China's hog herd, Oberbroeckling described the attitude as, "Life's good. It's not a problem. We got it under control and quite honestly if we lose a few pigs, we don't need them all."

Yet, at that meeting, the Iowa group got a call that an earlier tweet about African swine fever from a reporter on the tour needed to be removed immediately. "Big brother is watching," Oberbroeckling said.

Still, highlighting the damage of ASF, China's State Council on Wednesday released a circular stating that more work is needed throughout China's government and pork industry to control African swine fever. New guidelines stated quarantines need to tighten and better controls are needed on the movement of animal and testing of hogs for ASF.

A monthly producer survey conducted by Purdue University and CME released this week showed 69% of farmers think the trade dispute with China will ultimately be resolved in a way that benefits U.S. agriculture. In response to another question, 32% of producers in the survey, done in mid-June, said they expect the trade dispute to be settled by early September.

"I am happy we might have negotiations going again, but we've been disappointed so much I am not going to get my hopes up until I hear something sound, I guess," Heisdorffer said.

For a timeline of the U.S.-China trade dispute going back to July 2018, see "A Timeline for US-China Tariffs" here: https://www.dtnpf.com/…. 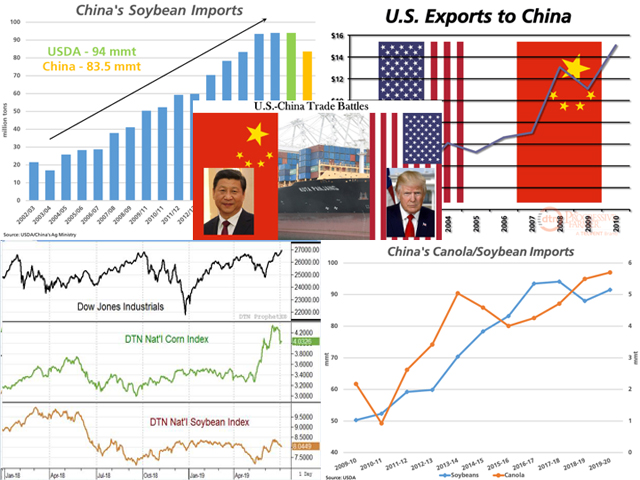