COUNCIL BLUFFS, Iowa (DTN) -- Agriculture Secretary Sonny Perdue on Sunday told farmers gathered for an annual tractor ride that USDA plans to increase the insurance indemnity percentage for prevented planting claims, but the department has to figure out how much money it will have available.

Perdue's tractor, a restored International Harvester 656, was driven up from Georgia by the event's sponsors to get Perdue to the event this year just outside of Council Bluffs, Iowa. Perdue told the crowd the tractor had belonged to his dad but had set out in "the boneyard" on Perdue's farm until his wife and a friend had the tractor restored in 2010 when Perdue was governor of Georgia.

"They unveiled it at Ag Day in 2010 and totally blew me away by surprising me about that tractor that I had such a personal affinity for, having spent so many hours on it," Perdue said.

More than 600 farmers were scheduled to participate in the tractor ride this week. Perdue led off the ride on Monday, along with Iowa Gov. Kim Reynolds.

Highlighting the difficulties farmers have faced this spring, Perdue on Sunday pointed to USDA's program changes over the past month, including a decision to create new Market Facilitation Program (MFP) payments for 2019, as well as changes in crop insurance rules. Last week, USDA agreed to allow haying and grazing on cover crops under prevented planting rules on Sept. 1, rather than Nov. 1.

Perdue went through the steps that a farmer can take to file a prevented planting claim and receive the full indemnity, plant a cover crop and harvest or hay it after Sept. 1, then still receive a MFP payment as well.

Perdue stressed farmers have to plant a crop of some kind to collect a Market Facilitation Program payment for the 2019-20 crop. That includes planting a cover crop, which Perdue reiterated would generate a "minimal" type of MFP payment, "Not what you would have gotten with the main crop you were planting." Perdue said the Commodity Credit Corp charter does not allow paying for prevented planting acres.

"We can't tell you how much -- we don't know -- but we're going to be able to top off that prevented-plant percentage going forward," Perdue said. He added, "We're doing everything we can to make sure you can go again next year."

Bill Northey, USDA's undersecretary for Farm Production and Conservation, told DTN it will likely be at least later into July or August before USDA can make a decision on prevented planting acres. More details on MFP payments should also come later in July after USDA receives planting information from farmers.

Perdue noted he had just been with President Donald Trump in Council Bluffs less than two weeks ago to highlight year-round E15 sales. Yet, the president also picked up from farmers and others who spoke at the ethanol event that EPA's small-refinery exemptions or waivers under the Renewable Fuel Standard are undercutting ethanol demand. Perdue said the president cornered him and EPA Administrator Andrew Wheeler, Perdue said.

Perdue added the president was surprised by some of the companies that qualified for the EPA waivers. "The president asked him (Wheeler) specifically, 'How in the world does Exxon Mobil qualify as a small refiner?' I said, that's the question farmers in Iowa have been asking, right?" Perdue said.

Perdue said it was hair-splitting for "people in Washington" to use "small refinery" versus "small refiner" in defining the refinery exemption. "I'm here to tell you I don't characterize Exxon Mobil as a small refinery or refiner when they made billions of dollars last year," Perdue said. "We're going to see what we can do about that."

The small-refinery exemptions have reduced ethanol use by about 2.6 billion gallons, and 39 refiners are waiting for EPA to decide on new exemptions. A dozen ethanol-state senators wrote EPA earlier this month asking the agency to stop granting the exemptions and to reallocate the fuel-blending volumes that have been waived off by the exemptions.

Perdue also told farmers gathered Sunday that the Trump administration continues working on trade. The U.S.-Mexico-Canada Agreement needs to be ratified by Congress while negotiations continue with Japan and China, he said.

"China, you can't disregard them. They are a big country, they have got a lot of hungry mouths, but they haven't played fair for years, and we're insistent that they have got to play by the rules," Perdue said. 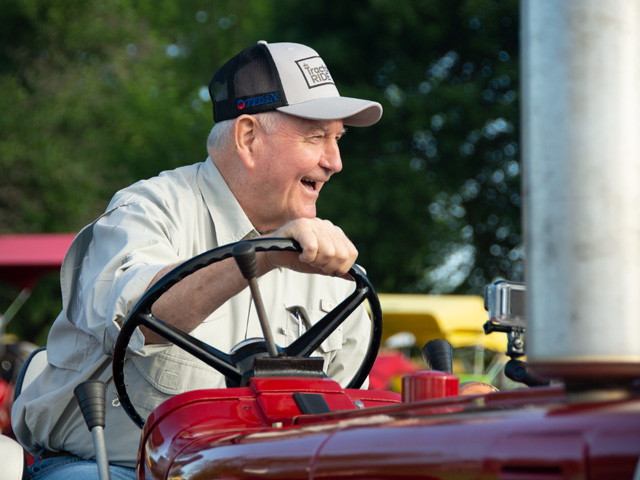