OMAHA (DTN) -- Farmers whose entire farms were underwater this spring could lose a significant premium discount for enterprise unit insurance because they didn't plant the minimum acreage requirements under prevented planting coverage.

Ruth Gerdes, a Nebraska crop insurance agent who testified this week before a House Agriculture Subcommittee, said there are farmers with flooded fields who won't be able to meet the crop insurance "20/20" rule. That requires farmers to plant the lesser or either 20 acres or 20% of their acres in an enterprise unit.

Enterprise units combine all of the acres of a crop in a county under a single policy for a farmer. Enterprise units receive deep discounts because the farmer has taken on more risk.

The result of not meeting those minimum planting requirements is farmers lose the enterprise unit status and their crop insurance premiums will go up significantly. Gerdes said current-year premiums could easily double for farmers.

Asked by Rep. Dusty Johnson, R-S.D., at Thursday's hearing if there were any changes needed to prevented planting coverage, Gerdes said lawmakers would probably start hearing more from farmers later this summer about premium hikes.

"As these farmers start to file acreage reports, if you have your entire farm -- the entire farm is flooded, and you were signed up for an enterprise unit and you didn't get your 20 acres on two separate sections planted on that crop planted, then your premium just doubled," Gerdes told lawmakers.

For some farmers with high-risk ground, the premium on that unit could easily more than double, Gerdes explained. In a year like this when a farmer is prevented from planting the full farm, they should be allowed to keep the enterprise-unit discount, Gerdes said. "Because his intention was to plant it all," she said.

A USDA spokesperson emailed DTN on Friday that the Risk Management Agency "is aware and is currently reviewing what options may be available to address this issue."

Gerdes told lawmakers Thursday that farms near her in southeast Nebraska and northwest Iowa are still under as much as 6 feet of water, and her office is already paying out prevented planting claims.

"It's not going away, and unfortunately for some of you downriver, it's not going to get any better," Gerdes said. "We're still under siege."

Gerdes has worked extensively with the crop insurance industry and USDA on policy, noting she helped work on the original prevented planting policies in the early 1990s. The 20/20 rule was originally put in place as a way to encourage farmers to plant as much as possible in a tough planting season. The rule was not meant to punish farmers who were hit with a disaster.

"This is such an abnormal, horrendously difficult year. I don't think anybody in their wildest dreams ever thought entire farms wouldn't be planted," Gerdes told DTN.

On a national perspective, Gerdes said the enterprise unit issue might not affect most people, but it could be significant for farmers in both the Missouri and Mississippi river valleys who have faced floods all spring. Along the Missouri River bottom, farms are still flooded from storm events that began more than three months ago. The Corps of Engineers just this week was able to close a couple of river breaches in southwest Iowa. Water still rages across a large swath of river bottom area in northwest Missouri.

"We've still got water on a lot of ground," Gerdes said, adding one of her agents took an airboat ride this week to shoot video of some flooded ground. "She has got some amazing video from that."

If farmers lose the enterprise unit policy, then they go back to a basic policy and premium for each farm unit, or an optional unit. That will have to be determined at acreage reporting time.

Gerdes said she did not know how widespread the problem could become. "None of us all of these years ever thought we would have 1,000 to 3,500 acres or whatever it is. Nobody thought people would not be able to plant anything."

She added, "We have got guys with many, many acres and it's just not feasible for them to plant."

Over time, USDA and the crop insurance industry have reduced some incentives for prevented planting payments by lowering the coverage levels and dropping the harvest price option. The price rally brought on by the production challenges this spring would better aid the farmer who got crops planted and then was flooded than it would the farmer who could not plant at all.

"How is that fair?" Gerdes asked.

The disaster aid bill gives USDA authority to raise the protection level and compensate farmers with the higher of the insurance spring price or the harvest price. USDA released a statement on June 10 about such issues, stating, "USDA is currently exploring legal flexibility to provide assistance that better utilizes the harvest price in conjunction with revenue and prevent planting policies." (https://www.usda.gov/…)

Farmers who are unable to plant are also excluded from the Market Facilitation Program payments. USDA is requiring farmers to plant a crop, even a cover crop, to be eligible under MFP. 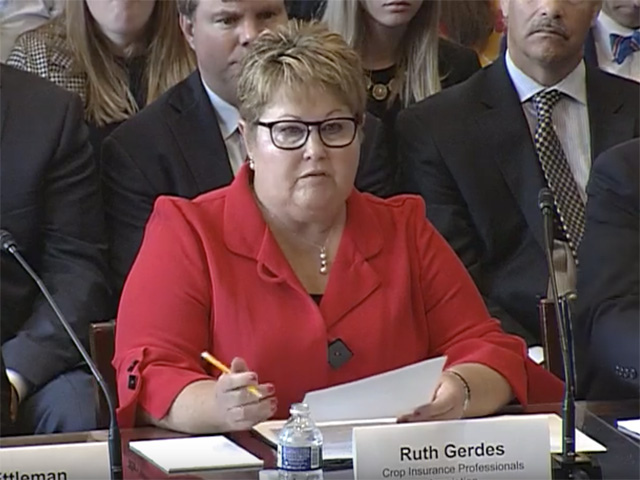