OMAHA (DTN) -- Responding to a request from the Agricultural Retailers Association, a USDA spokesperson said Wednesday it cannot change crop-insurance contracts to extend the planting season.

The Agricultural Retailers Association wants Agriculture Secretary Sonny Perdue to extend the late-planting season for crop insurance to avoid the "risk of unintended consequences" from the disaster legislation that passed Congress.

A spokesperson for USDA responded to DTN that the department cannot make changes to the contracts between farmers and crop-insurance companies.

“Final planting dates and the late-planting period are part of a binding insurance contract between the producer and their insurance company. As such, they cannot be waived or altered during the insurance period," a spokesperson stated in an email to DTN.

The ag retailers group fears its members will be left holding seed, treatments, fertilizer and other chemicals if farmers don't plant a crop. The disaster package includes language on prevented-planting insurance that could boost prevent-planting insurance coverage to up to 90% of the loss for those who bought policies. The bill also has language that would allow farmers who did not obtain an insurance policy under the Noninsured Crop Disaster Assistance Program to pay a fee and cover up to 70% of prevented-planting losses.

Based on the late season, analysts were already predicting a potential record year for prevented-planting claims and acreage even before the disaster aid was approved.

Crop insurance coverage declines 1% each day after the final planting date for the next 20 to 25 days afterwards in most of those states.

Writing to Perdue on Tuesday, the Agricultural Retailers Association (ARA) said the legislation could harm retailers and others who serve farmers. "We have concerns regarding the negative impact of widespread preventative planting payments may have on the agribusiness community," ARA said.

The letter goes on to say, "should farmers choose not to plant in 2019 and instead take preventative planting compensation, the retailer who positioned to provide seed, seed treatment, fertilizer and crop protection for that crop will be left holding product which will either drop in value, or worse, as in the case of treated seed, be of no value at all."

Thus, ARA writes to Perdue, disaster aid that encourages farmers not to plant "will have a significant detrimental impact on agricultural retailers and other businesses who serve farmers."

With that as ARA's concern, the group asks Perdue to look at extending the growing season and the end of the late-planting season. "In our view, delaying the preventative planting date in the affected state for the 2019 growing season, or in the future, would be an excellent resolution to accommodate grower needs while also considering the interests of those who serve the growers. We believe the American farmer wants nothing more than to be able to put crops in the ground and produce a plentiful harvest, and this action would hopefully assist to that decision."

Farmers were already facing some pressure to plant because USDA announced last month a new trade-aid payment would be based on planted acres, but the weather has not cooperated with planting season thus far.

"You may have noticed I haven't talked about yield yet. In 1995, when the corn crop was planted late, the yield came in at 113.5 bpa, roughly 13% below trend. It is understandable that corn planted late, or in less than ideal circumstances, would suffer yield loss and it wouldn't be surprising to see that in 2019," Hultman wrote.

Hultman noted, "However, the question of yield is made more difficult by the fact that farmers aren't planting 1995 corn seeds in 2019. I asked DTN Crops Technology Editor Pamela Smith and DTN Staff Reporter Emily Unglesbee how 2019 hybrids might compare to 1995 in these conditions. Both agreed that today's corn genetics should handle adverse conditions better than what we saw 30 years ago. Unglesbee pointed to the fact that traits offering weed control and insect control came after 1995."

He added that Smith explained, "We have much better planters that place seed better. We also have better hybrid placement and hybrids that respond to higher plant populations. Today's hybrids utilize nitrogen better and more common use of fungicides helps preserve yield."

The University of Illinois FarmdocDaily addressed the risk of declining corn yields due to late planting in an analysis in early May. https://farmdocdaily.illinois.edu/… 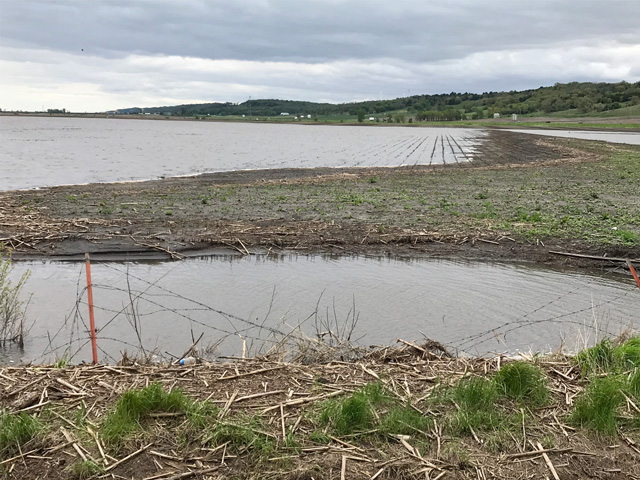