WILLIAMSBURG, Iowa (DTN) -- Leaders of a major Iowa equipment manufacturer and Iowa farmers reiterated their calls Wednesday for President Donald Trump to remove tariffs against trading partners that have driven up the prices of steel and aluminum as well as retaliatory tariffs that are hurting farm exports.

Sen. Joni Ernst, R-Ia., told business leaders and farmers at a roundtable discussion that she needed to hear their experiences so she could get the message to Washington, D.C. that the U.S.-Mexico-Canada Agreement (USMCA) must be ratified and tariffs against Canada and Mexico must be lifted.

Roughly one-in-five jobs in Iowa is tied to trade, largely in agriculture. Wednesday's event at Kinze Manufacturing in eastern Iowa was organized by the group Tariffs Hurt the Heartland and the Association of Equipment Manufacturers (AEM). Wednesday's event was the 15th town hall around the Midwest as groups seek to rally support to drop tariffs.

Dennis Slater, president of AEM, said tariffs equate to a tax and the tax is hitting U.S. businesses and consumers. "China is not paying the tax. We are paying the tax," Slater said.

Ernst said she did not see any serious sticking points that would prevent the USMCA from ratification. Congress right now is still waiting on the Trump administration to submit the trade deal to Congress, which then starts a timeline for votes on the trade agreement. The bill would begin in the House, where Ernst said she thinks House Speaker Nancy Pelosi, D-Calif., supports the USMCA.

"The administration needs to be working with the House on how to get this through," she said.

Beyond the USMCA, there is equal angst about talks with China and the tariffs in place there. Last summer, President Trump imposed a 25% tariff on $50 billion worth of Chinese goods then followed up with a 10% tariff on $200 billion in goods. China has imposed tariffs on more than $110 billion in U.S. goods, including 25% tariffs on a range of agricultural products, including soybeans, and even higher tariffs on U.S. pork.

Ernst said trade needs to go beyond "one-off" sales to China for products such as soybeans and pork. "We need long-term resolution and that means getting the trade deal done," the senator said.

Richard Dix, senior director of supply chain for Kinze, said the manufacturer has seen an unprecedented increase in the price of steel, which translates into higher prices for the planters, grain carts and tilling equipment Kinze makes. Then Kinze sees sales affected because farmers are worried about their own income going forward.

Tariffs are having costs in a variety of ways. A study released this week by the University of Chicago and the Federal Reserve showed tariffs increased the costs for washers and dryers an average of $86 per washing machine and $92 per dryer. That added up to additional costs of $1.5 billion to consumers just for those products.

Further, tariffs and higher metal prices are taking away options such as investing more money in the company or rewarding employees, Dix said. "We're forced to make different decisions because money is being siphoned away from our company.

"Our biggest fear is this becoming the new normal," he added.

Other business people in eastern Iowa told of companies losing business to European or Asian firms because of the steel and aluminum tariffs, or the tariffs placed on China. Jon Kinzenbaw, who founded Kinze, said he's concerned about what could happen to Iowa land values because of persistent low farm prices and the effect that would have on farmers.

"If we don't get this thing turned around, I predict there will be a lot of farms and other things changing hands in the very near future," Kinzenbaw said.

Ernst said she disagrees with the way President Trump used a national-security section of an old trade law, "Section 232," to place steel and aluminum tariffs on most trade partners, especially Canada and Mexico. Those countries retaliated and expected the tariffs to be lifted once the USMCA was negotiated. Right now, the tariffs remain in place and the Trump administration has not offered any details about lifting the Section 232 tariffs.

"If there is a deal in place, and the USMCA is essentially done, then the tariffs need to be lifted," Ernst said.

Ernst is working on legislation that would require the Department of Defense to determine national security threats before such tariffs could be imposed in the future.

Pam Johnson, former president of the National Corn Growers Association, said there is too much uncertainty about markets as farmers go to the fields this spring to plant a crop. She pointed to a recent University of Illinois analysis highlighting the losses farmers currently face planting either corn or soybeans.

"I have never had to go into a season planting a crop with that in mind," Johnson said.

John Heisdorffer, former president of the American Soybean Association, told Ernst that U.S. farmers spent millions of dollars developing a trade relationship with China and he fears they may never get the market back like it was just over a year ago. Heisdorffer cited problems in the Dakotas trying to find a market for beans that would have been exported.

"All of those funds seem like they have been lost because we are back where we started," Heisdorffer said. Heisdorffer also talked about how much U.S. trade disputes have helped international competitors such as Brazil. "We more or less handed them our soybean exports because of the tariffs."

Ernst expressed confidence in the president on trade, especially the adoption of USMCA. "I think he is going to want to see this as a significant achievement of his administration," she said. 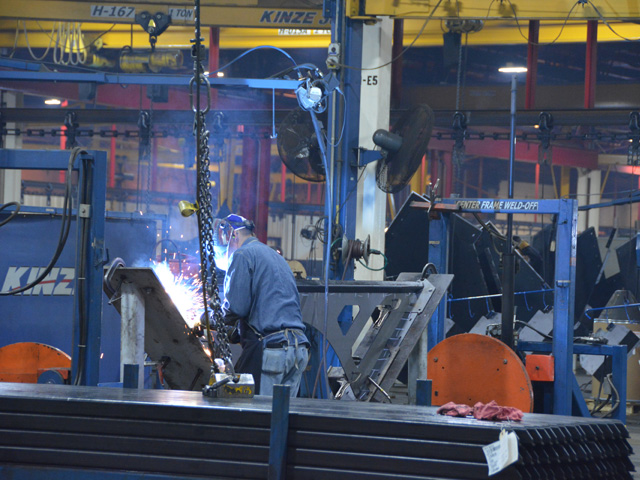