DES MOINES, Iowa (DTN) -- Iowa farmers noted Secretary of State Mike Pompeo largely kept his cards close to his vest regarding trade talks with China, but they nonetheless appreciated Pompeo coming to the state on Monday to make the case about the importance of demanding structural market changes in China.

The secretary of state didn't share many specifics on trade talks with China, but reiterated the Trump Administration's case why the trade talks were needed even if the resulting tariffs led to lower market prices and export sales for U.S. farmers in the short term. While the secretary largely avoided domestic politics in his talk, the trip to Iowa could be viewed as trying to shore up support with farmers, a favorite constituency of President Donald Trump.

Roughly 200 people attended the event at the World Food Prize headquarters in downtown Des Moines. Pompeo also toured a Corteva facility earlier in the day and spoke with a local Future Farmers of America group.

Pompeo criticized the state control asserted over business in China, saying it leads to corruption and poor overall oversight and control. He pointed to food outbreaks in China such as contaminated baby formula to show where government control failed Chinese consumers.

"Competition and choice requires companies to play by the rules," Pompeo said, pointing to journalists, non-government groups, investors and food-safety advocates as an "entire eco-system" that keeps an eye on the government and markets. "Only the free market makes life better in the long run."

Focusing on intellectual property theft, Pompeo highlighted a case out of Iowa in which a Chinese national was caught trying to steal seeds out of a cornfield. It was later discovered the man had sent several packages of corn seed to China. In another agricultural case, Chinese nationals were caught by Customs and Border agents trying to leave the country with bags of biotech rice.

Farmers asked about the major obstacles left to getting a trade deal with China, as well as when the U.S. might lift steel and aluminum tariffs on Mexico and Canada to further facilitate ratification of the U.S.-Mexico-Canada Agreement. On China, Pompeo said he can't get into specific details, but the issue of market access is overshadowed by the intellectual property theft and forced transfer of technology that China demands. Those technology issues "are real and not something the Chinese are going to give up easily," Pompeo said.

Pompeo indicated U.S. negotiators are trying to embed enforcement mechanisms into trade deals, but at the same time curb the ability of China, Canada and Mexico to place retaliatory tariffs on U.S. goods.

"This risk of retaliatory tariffs -- you've seen it in pork and we've seen it in other places -- is real," Pompeo said. "The president is deeply aware of this, the trade teams are all aware." He added, "We're working to clean up all of these issues along the side of that. I hesitate to get too far ahead of myself, but I'm optimistic we'll get resolution and pull back some of these retaliatory tariffs."

Pompeo said trade agreements need enforcement mechanisms that don't require long battles in court, adding that this has been a repeated mistake in past administrations negotiating trade deals. Pompeo joked, "We're trying to make original mistakes and not repeat the past ones," he said. "We're trying to make sure we don't fall down the same trap that American trade negotiators have done so many times."

Pompeo also told farmers he was confident there were enough votes in Congress to pass the USMCA. In the end, officials in Canada and Mexico will also see that ratifying the new trade deal is the best outcome, he said. Pompeo said it "remains to be seen" how the Trump Administration will unwind the Section 232 tariffs on steel and aluminum, but he reiterated confidence on the USMCA.

"I am, as is the president, enormously sympathetic to what you all are going through, but I wouldn't want to predict a day or a week or how this is going to fall out," Pompeo said.

Former Iowa Gov. Terry Branstad, now ambassador to China, said he wanted to bring Pompeo to Iowa to talk about what is being done "on these very delicate and important issues." Besides the trade talks, Branstad highlighted the nuclear talks with North Korea and talks between President Trump and Chinese President Xi Jinping to restrict the chemicals used to make the opioid fentanyl.

"Obviously trade is a huge issue Iowans are concerned about, and yet frankly it is an issue that should have been addressed a long time ago," Branstad said, adding, "We can't let this continue and if we get an agreement we've got to find a way for it to be enforceable."

Branstad told reporters he did not know if Chinese officials would take up Trump's call for China to eliminate tariffs on agricultural products.

Mark Recker, chairman of the Iowa Corn Growers Association, told Pompeo farmers invest in checkoff dollars to invest in promoting international markets. Going from that, Recker asked the secretary about the steel and aluminum tariffs on Canada and Mexico, and how those could be removed to get the USMCA finalized.

"I think he still held his cards close to his vest," Recker said. "I think they want to keep those (steel and aluminum tariffs) on for whatever reason to, I guess, keep the carrot out there for Mexico and Canada to get the agreement done."

Canadian and Mexican officials have noted that they do not want to ratify the USMCA until the tariffs are lifted, Recker noted. "Speaking as a farmer, we know we have to get those removed to get that agreement done."

Recker had just returned from the Commodity Classic event in Orlando, Florida. When asked about the sense of farmers' views on the Trump Administration and trade, Recker said, "I think the general sense, I think they are OK yet. They have made the commitment to this administration and Trump, knowing before the election this was an avenue he could take and the financial consequences coming along. But I still think farmers are going to look and ask, 'Who's our alternative?' Right? I think they are still going to stay committed to this administration in general."

Ben Riensche, a farmer from Jesup, Iowa, had a similar take as Recker regarding how much Pompeo could say about the talks with China. "Our administration has clear goals on what they want to get to and they aren't going to show all of their cards to get there," Riensche said.

Riensche added Pompeo wanted to assure farmers the administration continues to negotiate aggressively. Riensche said he continues to have patience with the talks.

"Farmers by nature are just used to poor crops, hail, bad crops and markets," he said. "One little rough patch negotiating doesn't really scare us off. Give me a little more time and that might change, but this hasn't tested the farmers' resilience yet."

Riensche also had asked Pompeo about the status of Indiana farmer Kip Tom's nomination to be agricultural ambassador to the United Nations. Tom was nominated last July, but has yet to get a confirmation vote in the Senate -- despite a unanimous committee vote last September advancing his nomination. Riensche's question was one of the few that got Pompeo off script as the secretary complained about roughly 40 nominations being held up in his department right now.

"I should have you all sign letters on his (Tom's) behalf," Pompeo said, adding he was "enormously frustrated" with the Senate process. "I couldn't tell you (about a confirmation). I don't know what those timelines look like." 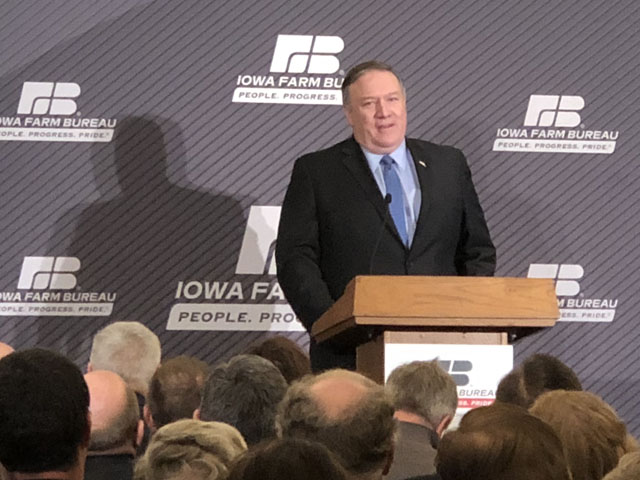