ARLINGTON, Va. (DTN) -- Agriculture Secretary Sonny Perdue talked about trade and the new U.S.-Mexico-Canada Agreement with his Canadian and Mexican counterparts at the USDA Agricultural Outlook Forum on Thursday. But a lingering problem remains over how and when the Trump administration would remove steel and aluminum tariffs against the country's closest trade partners.

To protect domestic steel and aluminum manufacturers, President Donald Trump last March placed national security "Section 232" tariffs of 25% on imported steel and 10% on imported aluminum. Canada and Mexico immediately responded with retaliatory tariffs, including tariffs on some agricultural products. Despite getting a new trade agreement to replace NAFTA, the tariffs remain in place.

Those steel and aluminum tariffs remain a thorn in getting the new USMCA trade deal ratified by Mexico and Canada. Perdue said he realizes U.S. farmers are getting hit with higher machinery costs because of steel and aluminum costs while commodity prices have declined or flattened. Perdue said, ideally, the tariffs will be lifted "sooner rather than later," but he had no specific knowledge on what's next.

"Again, the expectation among the ag sectors, in all our countries, were that once an agreement was reached on the U.S., Mexican, Canadian Agreement that the 232 tariffs on steel and aluminum would have been resolved as well," Perdue said.

Perdue later added that he and others "were hopeful and optimistic that the 232 tariffs can be resolved. Again, my opinion is resolving the 232 tariff issues between the three countries would probably be great incentive for ratification in all three."

The secretary defended Trump's rationale for setting the initial steel and aluminum tariffs that were meant to drive domestic metal production higher.

"The president listens," Perdue said. "Obviously, he has a different opinion regarding the benefits of tariffs at this point in time, although I think he's willing to consider one of the methods being used."

Canadian Agriculture Minister Lawrence MacAulay simply pointed to the steel and aluminum tariffs as "a problem" for the three countries that will need to be addressed. Canadian officials have said in the past they won't ratify the new trade deal until the tariffs are lifted.

Perdue indicated he was optimistic Congress could vote on the USMCA sometime early in the summer even though Democratic leaders have criticized the treaty's work on labor and environmental policies. Perdue said the trade deal is an improvement in several areas, including labor, the environment and biotechnology policy. Politics, however, is affecting the view of the new trade deal, Perdue said.

"I think what you see happening here is political conversation that at this point is unwilling to give the president the benefit of the doubt and vote on anything he wants for political purposes leading into 2020," Perdue said. "I think that would be devastating to the nation. We cannot continue to make these type of international decisions based on elected politics."

In addressing the potential of auto tariffs, Perdue said the European Union "has been somewhat recalcitrant" in dealing with the U.S. need to have agriculture as part of any trade talks, and the EU has pushed back on that. The U.S. has been open to EU exports, but has not gotten the same response.

"The president is prepared to use whatever leverage he may have," Perdue said.

Regarding talks with China, Perdue said it was too early to get into specifics about increased agricultural exports, despite Bloomberg reporting China would agree in a memorandum of understanding to boost agricultural imports by as much as $30 billion. Perdue said all of this hinges on a bigger deal that requires structural reforms.

"Clearly, the real issue is structural reforms regarding intellectual property guarantees and enforcing those types of provisions, and I think if we could get those kind of assurances regarding China taking intellectual property theft seriously, then we could see a renewed and expanded agricultural trade between the two countries," Perdue said. "They have committed to quantities that are significant in that regard, but it's all contingent on the whole deal coming together."

The secretary added there also continued to be challenges negotiating with China on acceptance of biotechnology traits for crops. "China has been somewhat intransigent in their agreement and acceptance of those kinds of policies." Still, Perdue added he's "cautiously hopeful" both President Trump and Chinese President Xi Jinping want to come together and get a deal done.

Despite any potential negative changes in the trade talks with China, Perdue said the administration will not extend or create another program similar to the Market Facilitation Program, which has paid more than $8 billion to farmers affected by trade disruption. Perdue said farmers will go into the planting season with a better understanding of conditions rather than being hit by retaliatory tariffs in the middle of a crop year.

"Farmers have to do their marketing the same way they have always done -- look at markets and determine what they think is appropriate," Perdue said.

Perdue also expressed concern about African swine fever hitting the swine herd in China and other parts of Asia.

Canada's MacAulay also pointed to the risk of swine fever making its way to North America, saying more work is needed to deal with swine fever isolation to reduce the risk on exports. MacAulay noted, "It just takes one (case) to cost us billions of dollars." He added, "I just hope we can deal with this issue not after it comes, but before it comes."

Perdue couldn't specifically detail some of the technical elements USDA is working on to protect the industry from African swine fever, but the protocols parallel what would happen in a foot-and-mouth outbreak.

"I can tell you it is on our minds every day of every week and has been ever since we saw the resurgence in China, and I know the industry is very anxious about that," Perdue said.

Perdue also criticized what he sees as a movement, especially on social media, to criticize food production and safety. Perdue said these efforts are meant to deter biotechnology, and he called on people in agriculture to "fight the fear-your-food movement." 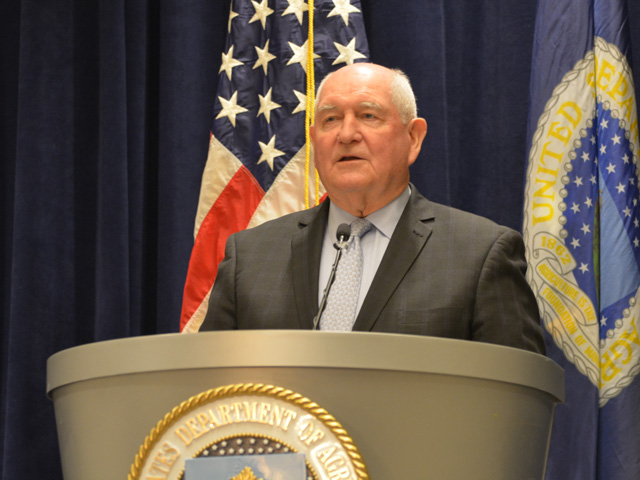