NEW ORLEANS, La. (DTN) -- Farm labor remains the top issue for Zippy Duvall as president of the American Farm Bureau Federation, but he recognizes the difficulty of trying to find a solution that involves foreign guest workers when the federal government is shut down in a fight over a southern border wall.

"It's the biggest issue that our farmers face across America," Duvall told reporters Sunday after his speech at AFBF's centennial meeting.

Duvall said he hopes there is an opportunity to work on agricultural labor issues, and ideally boost the guest-worker program for agriculture, but Duvall noted the divided Congress and heated debate going on right now over the wall.

"I know over the last several years when I would come to the Hill to talk about immigration, everybody's speech back to me would be, 'Well, we can't consider immigration or ag labor until we secure the border.' Hopefully we are on the path to securing that border and we can have some serious conversations about solving some of our problems," Duvall said.

Amid the celebratory mood for AFBF's 100th meeting, Duvall spoke Sunday about the challenges of 2018. The past year was a perfect storm for farmers with a combination of natural disasters, low prices, a trade war, labor shortages, lower incomes and rising debt. He recalled an emotional conversation with a dairy farmer who had to put his farm up for sale last year. Duvall touched on the emotional stress some producers are facing.

"Farmers are doing some bad things to themselves across the country because they don't know a way out," Duvall said.

The farm bill was passed, as well, with Farm Bureau organizing its efforts through more state-to-state communications so everyone understood what each state needed out of the legislation, Duvall said. Duvall said the bill improves risk-management tools, protects crop insurance "as the cornerstone" for the farmer safety net, provides more funding for trade and rural development as well as more programs for beginning farmers. "Just about everything in those recommendations came out in this farm bill," Duvall said.

SEAT AT THE TABLE

With President Donald Trump returning on Monday to give a keynote address, Duvall said the Trump administration "gives us a seat at the table," and with that, Farm Bureau needs to work to complete the EPA waters of the U.S. rule in 2019, as well as get Congress to approve the new United States-Mexico-Canada Agreement (USMCA), he said.

"It's our time now, we've got to get it through Congress. This president can't do it by himself," Duvall said.

Trump and some of his advisers have suggested withdrawing from the North American Free Trade Agreement as a way to spur Congress to vote on the USMCA. Duvall told reporters he had concerns about the president taking such action.

"If he withdraws from NAFTA, it would be crushing for American agriculture, so we're going to be trying to encourage him not to do that," Duvall said. "I know it's probably a leverage tool for him, but we're going to do everything in our power with our grassroots and through our state farm bureaus to encourage or educate Congress as to what this treaty is going to do for us moving forward, because it's a very, very important treaty that we need to continue before he does pull us out of NAFTA."

Sen. Jerry Moran, R-Kan., also told reporters it would be a bad idea for the president to withdraw from NAFTA, arguing it would give more leverage to free-trade opponents who want to reopen the USMCA negotiations. "It's a bad outcome for Kansas agriculture and U.S. agriculture," Moran said.

Also, the U.S. needs allies to tackle China. Duvall said if he has the opportunity to speak to Trump one-on-one on Monday, he will encourage the president to work with other countries on a solution for trade problems caused by China.

"China's just not mistreating us, they are mistreating a lot of other players in the world, and I think they are fed up too," Duvall said. "I think there are some other countries out there that would like to help us."

Duvall added the major trade negotiations for the U.S. that farmers want to see worked on are the trade agreements with Japan, the European Union and the United Kingdom.

Trump will come to Farm Bureau on Monday looking for a friendly crowd to help fuel the president in his battle with Congress over the partial government shutdown. Duvall said farmers are being affected by the need for disaster loans, trade mitigation payments and getting the new farm bill implemented.

"Wouldn't we just love to know he's found a solution to the problem?" Duvall said. "I will be expressing to him that even though it's directly -- he's not directly trying to hurt our farmers -- but this shutdown is going to hurt our farmers." He added, "We need to get those offices open and do it in an express way."

"We think we need the protection, and when people come across, we need to hold them accountable," Duvall said. "And I think when we do that, it's going to give us a better opportunity to speak to Congress about the needs we have for labor and find a fix for our problems."

Infrastructure is another issue Farm Bureau wants to tackle in 2019, including rural broadband. Duvall said farmers more and more realize high-speed internet isn't a luxury, but a necessity in rural America and on the farm, he said.

As part of the 100th-year celebration, lawmakers from both parties recognized Farm Bureau in a stream of videos that were shown during the general session. The U.S. Senate had introduced a resolution honoring Farm Bureau as well.

"I don't know of anyone that was able to achieve its goals," Roberts said, adding that Congress' primary responsibility, though, is to enhance and protect national security. "I really think that's what this is all about, and I hope it gets resolved quick."

Roberts, though, also raised concern about the current tariffs on agricultural products and the need to get some trade agreements completed as well.

"We're losing markets, and that's not good. If we continue this course without a strong, predictable, certain trade policy, we're going to be in a position where were going to diminish our agricultural production to the point it's going to be damning."

The vote on the USMCA "is not going to be easy," Roberts said. "So that's a big question mark." 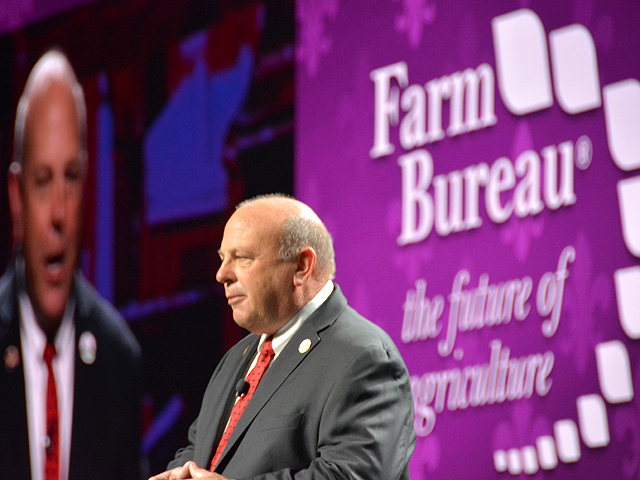