OMAHA (DTN) -- Farmers who had waited to enroll in the Market Facilitation Program will get a deadline extension once USDA Farm Service Agency offices are allowed to reopen.

USDA officials also announced late Tuesday that the department will be able to fund its largest food-aid program -- the Supplemental Nutrition Assistance Program (SNAP) -- through the end of February.

On trade aid, Agriculture Secretary Sonny Perdue announced Tuesday USDA will extend the Jan. 15 enrollment deadline for the payments and add a comparable number of days to set a new deadline when USDA funding is reauthorized by Congress and approved by the president.

As the government shutdown hit its 18th day on Wednesday, Sen. Charles Grassley, R-Iowa, said he had written to USDA asking for an extension because FSA offices had been closed since Dec. 28 when funding ran out.

"Obviously, the longer the shutdown goes on, the more problematic it will become," Grassley said.

Grassley said he asked USDA to accommodate those farmers who had not gotten enrolled.

"That's kind of a no-brainer," Grassley said. "Still, we got to tell the secretary of agriculture what my farmers are telling me, and I'm doing that."

In a statement, Perdue said the extension would run for a number of days equal to the number of business days FSA offices remain closed during the shutdown. Due to a Dec. 31-Jan. 1, holiday schedule, the FSA offices, as of Jan. 8, have been closed five business days.

"President Trump instructed me, as Secretary of Agriculture, to craft a program that would protect farmers from unjustified retaliatory tariffs from foreign nations," Perdue said in the statement. "As part of that package, the Market Facilitation Program has been making payments directly to farmers who have suffered trade damage. Using existing funds, we were able to keep FSA offices open as long as possible, but unfortunately had to close them when funding ran out. We will therefore extend the application deadline for a period of time equal to the number of business days FSA offices were closed, once the government shutdown ends," Perdue said.

Farmers who have already applied for MFP and certified their 2018 production have continued to receive payments, Perdue added.

"Meanwhile, I continue to urge members of Congress to redouble their efforts to pass an appropriations bill that President Trump will sign and end the lapse in funding so that we may again provide full services to our farmers and ranchers," Perdue said.

On SNAP, January benefits are already fully funded, but questions arose how USDA would handle February benefits if the partial government shutdown continues. Perdue announced late Tuesday that language in the short-term funding bill that expired Dec. 21 -- the Continuing Resolution (CR) in congressional parlance -- also had a provision allowing departments to make obligated payments for 30 days after the expiration of the CR.

"At the president's direction, we've been working with OMB (Office of Management and Budget) on a solution," Perdue said. "It works and it's legally sound, and we want to assure states and SNAP recipients that the benefits for February will be provided."

Perdue called on Congress to agree on appropriations and get a bill to President Donald Trump that he will sign. "The president has been quite clear about what he expects to see in an appropriations package that will end this government shutdown. Border security and a effective physical barrier along our southern border are commitments he has made to the American people and he has been steadfast in those promises."

Brandon Lipps, USDA's administrator of the Food and Nutrition Service and acting deputy undersecretary of Food, Nutrition and Consumer Services, said the contingency for March benefits would have to change if the shutdown continues.

The shutdown does not affect the ability for people to apply for and be approved for SNAP aid, which is handled by states.

USDA already has announced that the Jan. 11 crop reports have been delayed, including the following reports: Crop Production, Annual Crop Production, World Agricultural Supply and Demand Estimates (WASDE), quarterly Grain Stocks, Rice Stocks, Winter Wheat and Canola Seedings, and Cotton Ginnings reports. A new date for those reports will be set when funding is restored. 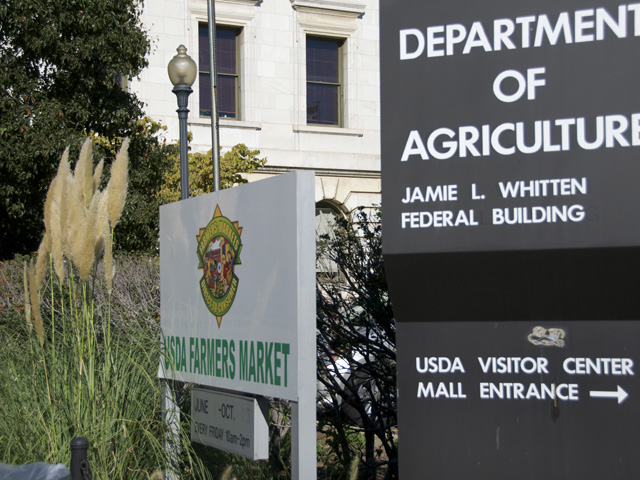