CHICAGO (DTN) -- Agriculture Secretary Sonny Perdue told farmers attending a keynote session of the DTN Ag Summit that he is optimistic coming out of President Donald Trump's G-20 talks with Chinese President Xi Jinping, as well as the signing of the U.S.-Mexico-Canada Agreement (USMCA) last Friday. But he also acknowledged that significant retaliatory tariffs by Canada, China and Mexico remain in place against U.S. agricultural products.

"From my perspective, nothing has changed from the tariff damage that farmers experience," Perdue said.

Perdue led off the 12th annual DTN Ag Summit in Chicago, which this year is focusing on the theme "The Power of Actionable Insights." Perdue is the first U.S. Agriculture Secretary to address DTN's farmer-driven conference.

Looking at the second round of trade-aid payments under the Market Facilitation Program, Perdue told farmers USDA is still analyzing the harm from trade retaliation and working with the White House Office of Management and Budget. Perdue said he expects an announcement on a second round of payments will happen "very soon, in a few days."

When it comes to dealing with China, Perdue noted China has made promises in the past it has failed to keep, including assurances more than a year ago to increase imports of U.S. agricultural products. So the secretary was somewhat skeptical, adding, "It's all about the delivery of those commitments and those promises."

Still, Perdue maintained that China will likely have to be back in the U.S. soybean market around the first of the year because of its need for oilseeds. China will have drained Brazil of old-crop soybeans, and Perdue said USDA analysts think China will have to buy from the U.S. before Brazil's new crop is ready to export.

"We're waiting to flesh that out and determine exactly what numbers and see the ships loading," Perdue said.

Perdue later told reporters: "Based on worldwide supply and demand, they have pretty much expended the Brazilian crop, and we don't think there's enough soybean supply in South America to tide them over until the new crop in South America. So we think they have got to come back into the United States market, and this announcement in Argentina will facilitate that more quickly."

U.S. soybeans have faced 25% retaliatory tariffs since last summer that have largely halted exports to China, leaving farmers and grain elevators to store more soybeans that are typically railed or shipped directly to export.

Under an agreement reached during the G-20 talks, President Trump would hold China accountable after the next 90 days to see if China's commitments address the structural reforms on intellectual property theft, cyber theft and other market issues that the U.S. wants China to change. Perdue said the ball is in China's court.

"It makes us excited about the potential, because we're all anxious about that," Perdue said, adding Trump and Xi have a good personal relationship, but the devil of policy is in the details.

The agreement leaves 10% tariffs on $200 billion that President Trump already has in place, as well as 25% tariffs on the initial $50 billion in products that the White House put in place.

One of the reasons China imposed tariffs on agricultural products was the trade surplus the U.S. carries in agriculture, Perdue noted. President Trump has been focused on the trade deficit with China since he took office, Perdue said.

"I'm excited about the promising news ... I'm trusting, but I want to verify what's happening in that range, and that would be more to come later," Perdue said.

On a press call earlier, Larry Kudlow, the White House economic adviser, was asked about China dropping tariffs on U.S. agricultural products. Kudlow said he does not have any specific details yet, but added, "My expectation is that China will roll back those tariffs quickly."

Perdue also indicated that the trade conflict with China has shown that U.S. farmers may have put too many eggs in one basket when it comes to selling large volumes of commodities to China.

"While we enjoy the market share, has China become dependent on us or have we become dependent on China?" Perdue said. "All you business people here know when you get over a certain percentage -- 50% or 60% of your business -- going to one customer then that's not a healthy economic balance." He added, "I'd rather have a lot of smaller markets rather than one huge market as we saw with China."

Perdue pointed to some smaller export victories in agriculture that USDA has worked on, but he also said it is critical to start talks with Japan to improve U.S. exports there as well.

The China talks overtook the signing of the new U.S.-Mexico-Canada Agreement, which Perdue said is better for farmers than the old North American Free Trade Agreement. Perdue said Congress needs to be made aware that the new trade deal is better and approve it. He cited improvements on wheat grading in Canada, well as improved dairy and poultry access in Canada as well.

"Every aspect of that, maybe except for one in fresh fruits and vegetables, is an improved product over what we have," Perdue said. "Our farmers are going to be better off under this USMCA deal than the old NAFTA."

Still, the U.S. has Section 232 tariffs on Canadian and Mexican steel and aluminum. That has led to retaliatory tariffs on some U.S. agricultural products from those countries as well. Perdue said the Trump administration is looking at volume quotas for steel and aluminum that would protect domestic production of those products but allow the U.S. to drop the tariffs.

Perdue reiterated he would like to see a quota system that does not encourage retaliatory tariffs. There's no real time frame, though, on any decisions, he said.

"We need for those retaliatory tariffs to come off if the president wants to go to a steel-and-aluminum quota system on that," Perdue said. "That's what many of us in the administration and cabinet favor."

On the farm bill, Perdue noted the legislation will be delayed because of memorial services this week for former President George H.W. Bush, who died last Friday. Perdue said the farm bill will be good for young and beginning farmers with higher loan limits and loan guarantees. The bill also protects crop insurance and provides more flexibility on the Agricultural Risk Coverage (ARC) and Price Loss Coverage (PLC) programs, he said.

"We're hopeful it will give us the flexibility for farmers to move back and forth a time or two to make the choice in what's in their own best agricultural interest and economic interests on their own farms," Perdue said.

While he supports getting a farm bill done, Perdue said he has been vocal about wanting to reduce the state waivers used that have allowed able-bodied adults without dependents to remain on food aid even in an economy with low unemployment. Perdue also said he is not satisfied with the forestry changes in the farm bill, but senators and environmentalists have balked at proposals advocated by the Trump administration. 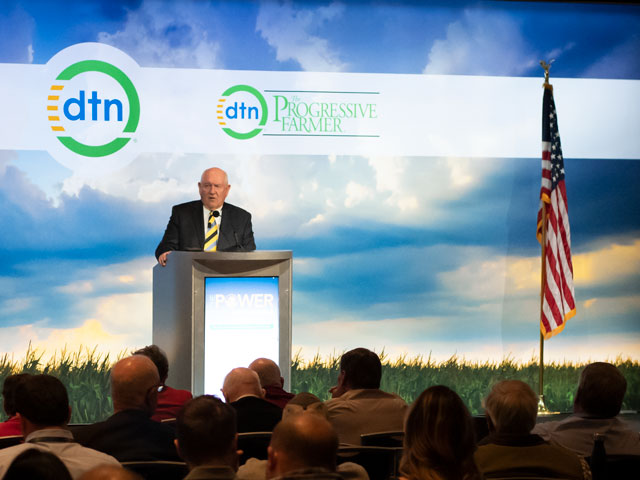