LENEXA, Kan. (DTN) -- A year into his second stint as EPA's Region 7 administrator, Jim Gulliford said he remains committed to compliance over enforcement in working with agriculture and other industries in the four-state region, which includes Iowa, Kansas, Missouri and Nebraska.

Gulliford summed up the rationale for the proposal: "It just confuses them when they are getting reports of emissions," he said. "Generally when they receive reports of emissions, it's a key or an indicator they need to respond to something -- that there has been an accident, there's been a release, just generally some kind of concern from human health impacts and the environment. That's just not the case with these livestock operations."

The National Pork Producers Council praised the proposal, citing the rule fits with legislation passed earlier this year by Congress, the Fair Agricultural Reporting Method, or FARM Act. The law exempts livestock farmers from emission requirements under the Comprehensive Environmental Response, Compensation and Liability Act, or CERCLA, which also is commonly referred to as the "Superfund Law."

The pork industry wants regulations that are practical and effective, but applying CERCLA and EPCRA to livestock farms would be neither, said Jim Heimerl, president of NPPC and an Ohio farmer. "Pork producers are very strong stewards of the environment and have taken many actions over the years to protect it," he said.

Still, the proposal drew criticism from environmental groups over the impact on the health of rural Americans. Food and Water Watch and the Center for Biological Diversity were among groups critical of the rule.

Agriculture is the largest economic function in Region 7, by far, which puts the farmers in contact with water resources and air quality, Gulliford said. Still, if there are compliance problems with regulations, EPA's goal is to get the industry, including agriculture, in compliance as quickly as possible.

Gulliford was appointed on Oct. 22, 2017, to take over the region. He is basically holding the same position he held early in the George W. Bush administration before moving to EPA headquarters to serve as assistant administrator for pesticide and chemicals. During the Obama administration, Gulliford was executive director of the Soil and Water Conservation Society.

Gulliford said challenges in the region are similar to his first stint, but he also reiterated the importance of maintaining good communication with farmers, ranchers and agribusiness.

"In this region in particular, farmers and ranchers have the greatest opportunity to provide cleaner water, cleaner air and protect their land resources," Gulliford said. "Those are really essential functions that haven't changed over time, but there is obviously some uncertainty over rules and regulations we want to correct, but we also want to communicate where we are in that process."

The administrator pointed out water quality remains the major challenge in the region, one EPA shares with the states. That includes nutrient runoff from agriculture.

"Farmers do a good job with their nutrient management, but nitrates, in particular, or phosphorus in its soluble form, or erosion situations released into state and local waters cause problems from an environmental standpoint," Gulliford said.

In keeping with the compliance-over-enforcement focus, Gulliford said one area he has sought to work on during the past year is risk management plans at businesses such as ag-chemical retailers to avoid accidental releases of hazardous materials. All businesses are required to have risk management plans for chemical storage and handling. This isn't one of those programs EPA can delegate to the states, but inspections can typically find some major compliance problems for businesses.

"What we've been finding is roughly 80% of the inspections that we do have significant violations," Gulliford said. "The potential problems associated with emissions or accidents can be health related. We've had some deaths, but also significant environmental problems."

This sparked litigation and an eventual consent decree last summer with MFA Inc. in Missouri over alleged violations of MFA's management of anhydrous ammonia at nine separate facilities in the state that included a combined inventory of more than 4.3 million pounds. EPA had gotten a similar plea out of MFA in 2007 but found in 2012 and after that MFA remained out of compliance. Under the settlement, MFA had to improve its risk management plans, install emergency shutoff equipment at more than 50 locations and pay an $850,000 civil penalty.

Trying to avoid larger problems in the ag sector, Gulliford reached out to the agribusiness sectors and offered to hold workshops on EPA risk management plans and inspections. Gulliford credited the Kansas Ag Retailers Association for taking him up on the invite to hold a workshop at an ag retailer with on-site storage. The day was spent going over the rules and how to maintain a risk management plan, as well as a mock inspection of the facility.

"We know more than 20 Kansas companies controlling more than 300 facilities showed up for this," Gulliford said. "Our hopes are the things that were taught there go back into those companies and are better applied."

A key part of these plans includes record keeping and notifying first responders about what kinds of chemicals are stored and where they are stored. Then there's the inspection of hoses, values and tank cradles. Kansas ag retailers wanted a second program in another part of the state.

"These individual ag retail outlets don't have an 'environmental person.' The large companies can, but they have difficulty getting to all of the facilities."

Gulliford then added he wants to provide similar training in Iowa, Missouri and Nebraska as well, though he noted businesses often have trepidation about EPA's motives. "We're not taking names or using these to identify better inspection targets. It's to achieve better compliance," he said. "We're not about producing enforcement numbers. We're about producing compliance, but enforcement is still the backstop."

Just a week after Gulliford talked extensively with DTN on risk management programs, EPA's Office of Inspector General announced it would conduct an audit of the agency's work in several areas, including risk assessment programs, as well as the agency's enforcement results from 2006 through 2018. The OIG also announced last week it would look into EPA's work on pollinator protections from pesticides and audit the board that oversees chemical safety, as well.

One area in Region 7 drawing more attention is harmful algal blooms, which are tied to agricultural nutrient runoff and sediment. But Gulliford said science needs to better understand the causes of algal blooms, citing that lakes and ponds under similar conditions can have different outcomes with algae.

"We find algal bloom problems in all of the states," he said. "Many of the large Kansas reservoirs have these challenges."

EPA has several surveys and studies looking at the problem. The algal blooms can shut down recreation in some areas, and the bacteria can be a problem for pets and livestock.

"Unfortunately, now we're dealing more with the symptoms than the actual cause, and obviously the goal is to prevent them rather than respond to them," he said.

Looking again for voluntary compliance before enforcement or rules have to step in, Gulliford pointed to prescribed burns for prairies in the Flint Hills. These prescribed burns protect the ecology of the foothills and keep the area prairies in much the same way fires did before the land was settled.

"It's only fire that makes prairie the dominate vegetation, because if you take away the fire, then the woods come in," Gulliford said. "We want to see the ecology of the foothills protected, and it takes fire to do that."

At the same time, the volume of controlled burns in the spring affect cities and towns downwind. The predominate air direction in the spring is south to north, so areas including Omaha and Lincoln, Nebraska, can be hit with high smoke levels and poor air quality.

"Where we have ambient air-quality issues, we want to make sure the air isn't compromised, and there are all of those small communities in between that are affected as well."

Former EPA Administrator Scott Pruitt met with landowners and Kansas officials last June with a specific focus on prescribed burns. Local Extension employees also met with Pruitt to stress the importance of prescribed burns. EPA is trying to encourage more fall burns after grazing cattle have been moved off the land. Gulliford credited livestock organizations for working to spread out the season "to get more burning in the fall." 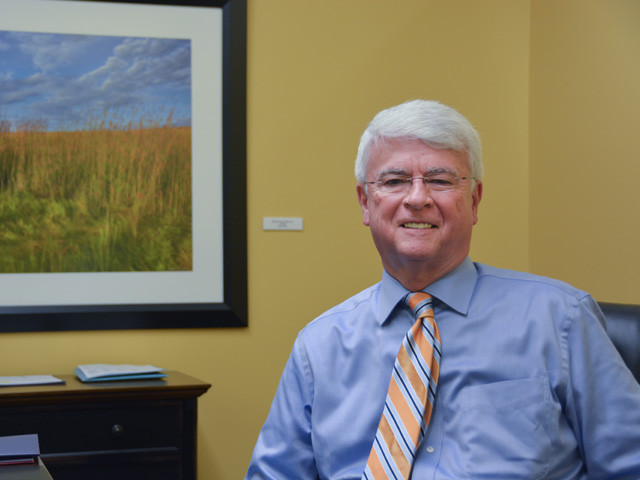