"Conservatives are the most important people on the planet when it comes to climate change," Inglis said, "because it isn't going to happen until the American conservative gets involved."

Inglis, a Republican, is on a 14-city tour, hitting mainly college campuses such as the University of Nebraska-Lincoln, for his organization, www.RepublicEn.org. The purpose is to start signing up more conservatives, the "eco-right," who will get GOP members of Congress to pay more attention to climate change.

"We're out to prove you're not alone if you are conservative worried about climate change," Inglis said. "We're also very big on making the point that we're energy optimists and climate realists."

Inglis lives on a "farmette" in South Carolina of 27 acres with some chickens and horses, but noted he would never characterize himself as a farmer. Still, the experience of farmers coping with climate change is instructive for everyone, he said.

"Because we have these positive feelings towards farmers, their reporting on the impacts of climate change is impactful on people way beyond the farm," Inglis said.

Inglis represented his South Carolina district from 1993-99 and carried more than 70% of the vote then. Initially, Inglis said, he was totally dismissive of climate change policies, and it took time to convince him otherwise. "I didn't need to know much about it except Al Gore was for it," he said.

He had agreed to step down after three terms, but chose in 2004 to again run for the same district. His family, especially his son, told Inglis he needed to better support the environment. He then took a couple of trips to U.S. research stations in Antarctic as part of the House Science Committee and learned how scientists studied the record of the Earth's atmosphere in ice core samples.

"And the science of it is pretty simple," Inglis said. "The basics of climate science are not new and not complicated."

Yet Inglis noted that climate modeling, which is similar to modeling hurricanes, reflects uncertainty, because even with hurricanes, there is an unpredictability about when and where one will hit landfall.

"You can pull those models apart and you can really introduce some doubt," he said. "But here's the thing: Whether it comes to your house or my house, it's pretty clear there's a storm out there based on the chemistry and the physics. To predict with precision where it's going to go, that's really difficult. And to predict sea-level rise with precision, that's really difficult."

Inglis initially pitched a carbon tax in 2009, which he acknowledged was not a good time because of the recession. Even discussing climate change was perceived as heresy in his conservative congressional district, though it wasn't the only position held against Inglis during the 2010 GOP primary.

Inglis also had supported the bank relief program called "TARP" and was among a small group of House Republicans who supported immigration reform and voted against a troop surge in Iraq late in former President George W. Bush's administration. He lost the primary after a landslide runoff 71% to 29% to current GOP U.S. Rep. Trey Gowdy.

"That is what you call a spectacular face plant," Inglis said.

Since losing his seat, Inglis has looked for ways to reach more Republicans on climate science and promote solutions that don't necessarily involve growing government or face a form of energy austerity. So far, several years into this endeavor, Inglis said younger people are keener on the message than older generations.

"Young conservatives are with us, their parents are harder and their grandparents are really hard," Inglis said. "That's the way it goes."

www.RepublicEn.org is mostly funded by foundations, some of which request anonymity. The most well-known person supporting the group is Julian Robertson, a hedge fund manager who founded Tiger Management Corp., who is on the group's advisory board.

To mitigate climate change, Inglis said that taxing pollution such as greenhouse gas emissions actually plays into the strength of the Republican Party, partly because taxes would spur private innovation quicker than regulation.

"The problem of climate change is really a problem of economics that has environmental consequences," Inglis said.

Inglis still supports a carbon tax to capture the real costs of burning fossil fuels. He notes burning coal into the air translates into free emissions, while the externalities of that pollution translate into higher health-care costs for people near the power plant and costs for long-term weather-related disasters and sea-level rise along the coasts.

The problem with such a solution is that energy prices go up. At $25 a ton for carbon emissions, the price of gasoline increases 21 cents a gallon, and the average home electric bill would go up $11 a month, depending on the main energy source for power in the state. States that rely more heavily on coal would pay more. Still, it would capture the true price of burning coal.

"It does mean prices are going up, but not artificially," Inglis said. "They go up to show the actual costs of what's being emitted."

At $25 a ton, a carbon tax in the U.S. would generate as much as $870 billion a year, depending on the number of industries' taxes and accounting of emissions. Under Inglis' plan, the taxes collected would come back to average Americans through income tax cuts or dividend checks.

Inglis maintains a carbon tax is a bedrock conservative idea. He cites Milton Friedman, an economist who advised former President Ronald Reagan. Friedman believed in taxing pollution rather than regulating it as a way to improve water and air. Rather than send the money from the tax to the government, return the money to taxpayers in corresponding tax cuts, Friedman believed. It's essentially a tradeoff to reduce income taxes while converting more revenue to a carbon tax.

Inglis' current view now runs counter to President Donald Trump's administration, which has announced plans to pull out of the global Paris Accords and is pulling back Obama-era policies meant to reduce greenhouse gas emissions.

Coming from South Carolina, Inglis said Hurricane Florence could change some mindsets in the Carolinas, but he said Hurricanes Sandy and Harvey haven't caused dramatic shifts in views. Inglis did point to an interview with U.S. Sen. Thom Tillis, R-N.C., in early August in which Tillis changed his view on climate change.

"I think we have to come up with several strategies to recognize the reality that climate changes; sometimes it changes just because it has changed through the millennia, and sometimes it changes because of human factors," Tillis said. He added, "It has an impact on business. It creates another level of uncertainty and businesses hate uncertainty."

To see the interview with Sen. Tillis, visit http://spectrumlocalnews.com/…# 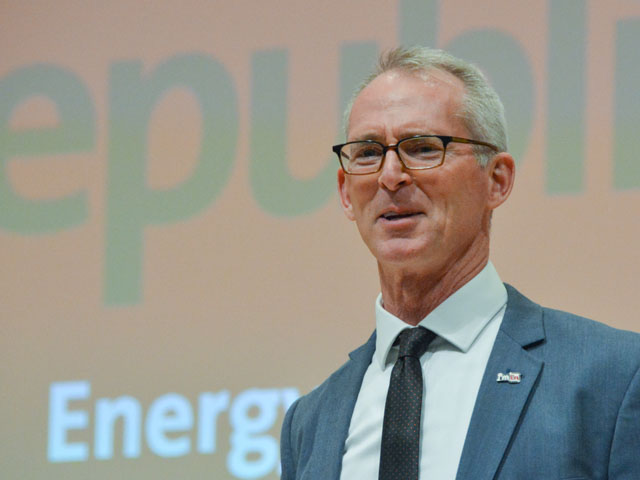