OMAHA (DTN) -- President Donald Trump and the president of the European Union announced after meeting Wednesday that the EU had agreed, as part of early trade talks, to lower industrial tariffs and increase soybean buys from the U.S.

European Commission President Jean-Claude Juncker and EU Trade Commissioner Cecilia Malmstrom met with President Trump as the two allies are already hitting each other with tariffs over steel and aluminum. The tariffs were disrupting a relationship that already has $1 trillion in annual trade.

Juncker reiterated Trump's soybean comments. "The EU can import more soybeans from the U.S., and it will be done."

Trump said the goal for the EU and U.S. will be to work toward zero tariffs and barriers and to slash subsidies. He also said the EU had agreed with him to work on reforming the World Trade Organization, which President Trump views as often unfair in its rulings toward the U.S.

Juncker said that, when he was invited to the White House, he had one intention to make a deal on trade issues and a deal was reached. Juncker said the U.S. and EU had agreed to hold off on further tariffs against each other. That staves off the risk of Trump slapping tariffs on European auto exports to the U.S. Juncker also agreed to build more natural gas import terminals to diversify energy imports, potentially from the U.S.

No specifics were laid out on just how much more soybeans the EU has agreed to increase imports of U.S. Globally, U.S. soybean exports are down nearly 2.8 million metric tons from a year ago, or 101 million bushels.

The trade announcements come a day after the Trump administration rolled out an aid package for farmers of up to $12 billion that will include direct payments to soybean, corn, wheat, cotton, dairy and hog farmers. 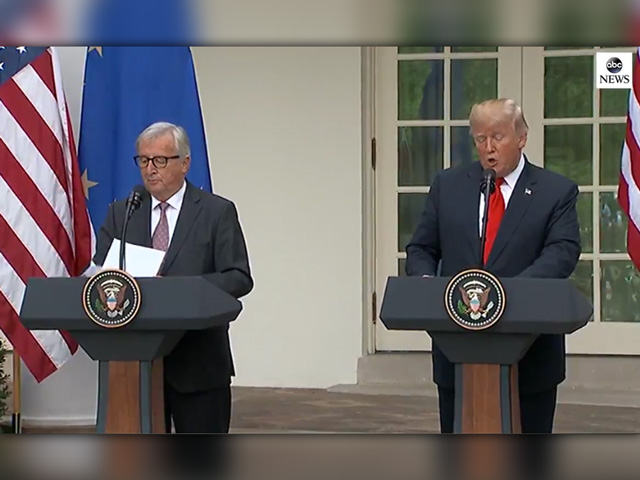