WASHINGTON (DTN) -- The U.S. Senate passed its version of the farm bill with overwhelming support in an 86-11 vote late Thursday afternoon, setting up conference talks this summer with the House and its bill, which passed last week in a strictly partisan vote.

Thursday amounted to a handful of votes with hours of delay in between as leaders of the Senate Agriculture Committee sought to avoid votes on measures that the committee did not support. They staved off a vote, for instance, that would have set a means test for crop insurance premium subsidies.

Senators voted the bill out as their final vote before breaking for the Independence Day holiday, and they did not want to carry the debate into Friday. Republicans accounted for all 11 senators who voted against the Senate farm bill.

Passage of the Senate bill sets up conference talks with the House Agriculture Committee over the rest of the summer as they seek to resolve differences between the two bills and still get final passage before Sept. 30, when the current farm bill expires.

The key difference between the Senate and House versions of the farm bill is how they treat work requirements for people receiving food aid under the Supplemental Nutrition Assistance Program (SNAP). The House tightens those work and job-training requirements, which cost the bill Democratic support and led to more difficulties getting the House bill passed over the last month.

The Senate took up an amendment Thursday similar to the House bill, but voted to table, or effectively stop the provision from being added. The amendment by Sens. John Kennedy, R-La.; Ted Cruz, R-Texas; and Mike Lee, R-Utah, would have eliminated work or job-training waivers used in 35 states and placed work requirements on able-bodied people without dependents, as well as require identification when someone uses a SNAP card at a retail outlet. The amendment failed 30-68 in a bipartisan vote.

In opposing the amendment, Senate Agriculture Committee Chairman Pat Roberts, R-Kan., said the farm bill already has SNAP reforms, and he pointed to SNAP pilot projects already underway in 10 states with plans to expand those to eight more states.

A group of amendments was added late to the bill by unanimous consent as a way to move to a final vote. Among them is a provision from Sen. John Thune, R-S.D., that would allow farmers with acreage enrolled in the Agricultural Risk Coverage (ARC) program to change their election to the Price Loss Coverage (PLC) program in 2021. This does not mean farmers would have to wait until then, but if a farmer keeps acreage in ARC or moves acreage to ARC after this farm bill goes into effect, then they would get the choice to switch later on, assuming this language makes it into the final version of the farm bill.

Another amendment by Sen. Mike Lee, R-Utah, was among the final roll-call votes, as he wanted to overhaul commodity checkoff programs to restrict allowing money to go to groups that lobby, among other provisions. Roberts opposed the measure and asked for a 60-vote majority for it to pass. The amendment ended up failing 38-57.

Thune also got a voice-vote approval on his Conservation Reserve Program amendment to allow landowners to hay or graze up to one-third of their CRP acreage every year, in exchange for a 25% decline in the rental payment.

Sens. Marco Rubio, R-Fla., and others had opposed using USDA trade programs for promoting U.S. agricultural products in Cuba, but Sen. Heidi Heitkamp, D-N.D., one of the champions of that plan, told DTN that they had worked out an agreement to ensure the State Department is involved in any plans to use those trade programs.

Heitkamp added she would argue in farm bill conference talks that the original amendment would still be a far better outcome for exporters who want to be involved in Cuba. "But, at this point, we didn't want to hold up the farm bill," she said. 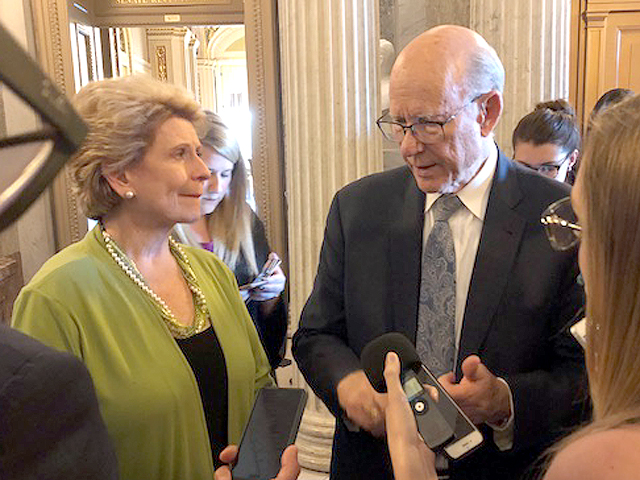