WASHINGTON, D.C., (DTN) -- Gregg Doud, the Trump administration's chief agriculture negotiator, took a harsh line, discussing China at a Farm Foundation forum on Tuesday just as farmers were seeing price rallies now that the U.S. and China appear to be putting tariffs on hold, which could boost U.S. farm exports.

Doud urged the audience to read the Office of the U.S. Trade Representative report on the Section 301 investigation into China's acts, policies and practices related to technology transfer, intellectual property and innovation.

"It's the goose that laid the golden egg, and now China wants the goose," Doud said, referring to China's insistence that U.S. companies doing business there provide access to the technology behind their products.

Doud also pointed out that these practices have taken place "outside the realm of the World Trade Organization," and said, "this is the issue we have in front of us."

Doud also noted that USTR has filed WTO complaints against China, charging that China has exceeded its allowed agricultural subsidies and now has large stocks of commodities that are affecting prices worldwide. Those complaints were filed under the Obama administration.

USTR believes that since China joined the WTO in 2001, it has exceeded what it believed would be its right to agricultural subsidization by "somewhere in the neighborhood of $100 billion," he said.

China "is not a country that necessarily believes in the dynamics of supply and demand, and futures markets and price discovery," Doud said.

"We have to remind ourselves today that China is a communist command-controlled economy. When you have that level of the world's residual supply of these agricultural commodities in one country, and that country, it is costing not only U.S. farmers money in terms of lower world commodity prices for these commodities -- it is costing every farmer in the world money. This is something that has to be addressed."

Doud said that when he became chief agriculture negotiator on March 1, China had 45% of the global corn supply.

"I believe China has begun to realize something that we realized in the 1980s here in our farm policy," Doud said.

In 1986, the U.S. government owned 60% of the corn stocks, which was "an unmitigated disaster," he said, that led to Congress decoupling farm subsidies from production.

"The purpose of this discussion is to make China realize we know how this movie ends" and that "they need to take farm policy in a different direction."

Doud also noted that the United States has another WTO case against China over its administration of its tariff rate quotas and has filed a counter notification to India's notification to the WTO on domestic support, charging that China subsidizes much more than it has reported.

Some countries want to get back into negotiations about reducing subsidies, but China and India represent 40% of the world's population and the United States needs "a good understanding" of what they are doing before heading back to the negotiating table," he said.

From a U.S. perspective, Doud said, the trade discussion has always been about reducing domestic supports coupled with market access.

Other countries have urged the United States to reduce domestic supports and said they want to talk about access to their markets later, but the answer to those proposals is "no, no, no, no," Doud said.

Market access and domestic support, he said, have to go "hand in hand."

Darci Vetter, who was the chief agricultural negotiator under the Obama administration, said at the forum she questions the future of "the underlying trade system" because of attacks on the rules at the WTO and the expectations that the U.S. will remain a leader on trade policy.

Without mentioning President Donald Trump, who has criticized the WTO severely, Vetter said that there are "questions we start talking about the WTO not being in our interest or undermining our sovereignty."

The WTO has "growing pains" in the relationship between the developed and developing countries and needs more transparency and enforcement, she said, but it has served the United States well in many ways.

Vetter, who negotiated the agriculture sections of the Trans Pacific Partnership agreement from which Trump withdrew, said she is glad the other countries in that group are continuing their negotiations, and wishes the United States were still in it.

On the North American Free Trade Agreement, Doud said that "the pens are not down," but it is important to get the policy right rather than to rush it.

Doud said he would not want to reopen the sanitary and phytosanitary section of the Uruguay Round agreement and that "blockchain" -- the computer network technology that allows sharing of information in a much more secure way -- is likely to revolutionize food safety because problems can be figured out quickly.

One of the surprises when he took the job, Doud said, is how bad relations are with the European Union, and he cited EU policy on pesticides as an example.

A subject that is being discussed and leveraged, Doud said, is the generalized system of preferences that gives countries such as Indonesia, Thailand and India duty-free access to the United States.

But many of those countries are behind on sanitary and phytosanitary standards, Doud said, and the Trump administration has said, "Hold on a minute. It is very important that if you are going to be a part of GSP (generalized system of preferences), you are going to play by the rules here in the international community, and we are going to hold you to that." 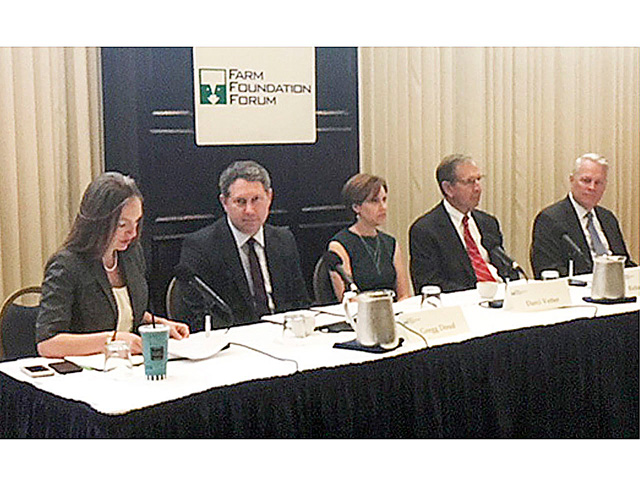