WASHINGTON (DTN) -- Former U.S. Senate Majority Leader Tom Daschle keeps close tabs on what's happening with biofuels even though he's been out of the U.S. Senate more than a decade now.

Daschle, who is working with the High Octane Low Carbon Alliance, told DTN in an interview last week he thinks the time is right for the ethanol industry to transcend the debate over the Renewable Fuel Standard -- or even 15% blend levels -- to help ethanol gain more market share by focusing on octane.

"The question is how do we get to the next level?" Daschle said from the office for his consulting and lobbying business, the Daschle Group.

Daschle sees the long-term progression of biofuels moving from reformulated fuels in the 1990s to the current Renewable Fuel Standard to higher-compression engines and octane levels in the near future.

"That's sort of the extraordinary progression of an industry that can be remarkably catalytic in addressing many of the challenges we face in transportation fuels for the next generation," Daschle said. "I look at it on that grand of a scale. I think that octane can mean cleaner air, it can mean higher performance, it can mean far more lucrative ethanol markets. It can mean tremendous new growth for rural America."

Daschle also has been talking to auto industry leaders, who testified at a congressional hearing last week that they want to see fuel mileage requirements continue to increase through 2025 and work with California to have a single national fuel-economy standard. The former senator also notes that policymakers seem fixated solely on the engine requirements for better mileage, but they need a fuel fix as well.

"There's a fix on the fuel side and a fix on the engine side. Both are required," Daschle said. "So far, people have only focused on the engine side. We think you can't do one without the other. Engines and fuels are compatible and need to be simultaneously addressed if you are going to be successful. So this is an open opportunity for us to provide solutions for these higher-compression engines and putting that combination of fuel and new-engine technology together."

He adds that auto industry leaders "all agree that higher octane is essential for their fleet mixes going forward."

Daschle said farmers and others who support biofuels should be paying close attention to the arguments over fuel economy, because if the higher fuel standards are dialed back, then that lessens the prospects for future ethanol growth. But higher fuel-economy standards and the engines that run on them require the development of a new marketplace, and octane is the "single-best way in which to produce that next market," Daschle said.

The net result of higher fuel economy would be more corn demand, which Daschle said is needed to accommodate the continuing growth in corn production. Further, boosting octane in autos through ethanol would help protect the biofuels industry from stagnating once 2022 arrives. During that year, the EPA administrator, U.S. Department of Energy head and ag secretary are required to work together to set volumes beyond 2022.

"The ethanol industry has demonstrated the opportunity to provide a growing market for corn, in particular, and I think with our increasing potential for improving corn production, we've got to continue to grow markets to accommodate that growth in production."

Daschle said he's confident that even with the growth of battery-powered cars, the majority of vehicles on the road for the next 30 to 50 years will still rely on fuels. That offers opportunities for higher-compression, higher-performance engines. "So they are going to need higher octane for those engines to be viable. The way to do that is through ethanol," Daschle said. "You want to have your electric vehicles, fine, but we still have a way over here with octane you can do it and still have your F-150s."

The advocacy for octane is to push for higher levels in the fuels at the pump, which now often range from 87 to 93 octane. Daschle and others involved in the High Octane Low Carbon Alliance want to see octane at fuel pumps of 98 to 100-plus levels that can only be achieved by ethanol because aromatics used by the petroleum industry to increase octane are carcinogenic.

"The sweet spot for octane is 98 to 100 and I think that opportunity is right in front of us, and the beauty of it is we don't need legislative authorization," Daschle said, adding that the polarization and dysfunction in Congress to make him skeptical that Congress to pass a law advancing biofuels and higher octane blends.

Researchers for the U.S. Department of Energy agree. In a report earlier this year, the Department of Energy spotlighted fuels with the highest potential to create more mid-level blends for markets through 2030. The goal of the study was to point out the best fuels with "a market pull of up to 25 billion gallons a year of domestically sourced fuel" that would improve fuel economy of both light-duty and heavy-duty pickups and create more lower-cost pathways to reduce greenhouse-gas emissions.

The only feedstock that scored out successfully was the alcohol family -- ethanol. Only ethanol could hit the octane numbers and heat vaporization needed for the high-compression engines that will be coming for better fuel economy.

Daschle has already played a significant role in ethanol history as a former Democratic South Dakota senator. In 1990, he pushed for changes to the Clean Air Act that gave ethanol some federal standing as a reformulated fuel additive. Then, in 1999, he and former Sen. Richard Lugar, R-Ind., first co-sponsored bipartisan legislation that eventually became the Renewable Fuel Standard. Daschle was Senate Minority Leader in 2004 when it appeared the Renewable Fuel Standard was picking up steam in Congress, but he lost his re-election bid that year and was not able to see the actual passage of the legislation in 2005.

"Almost everyone was against us when we started working on the RFS. I had very little support," Daschle said. "Slowly, but surely, with years of persistence, we got the job done."

The Environmental Protection Agency and the National Highway Transportation Safety Administration together have the authority to create a new regulatory environment around mileage standards. They are now in the process of revisiting the Obama administration standards for truck emissions and mileage, dubbed the "mid-term evaluation" from 2022-25.

"It's still in flux and we still have an opportunity to utilize it and maximize the opportunities here through the regulatory process because of it," Daschle said.

Unlike the current E15 argument, Daschle said, he also doesn't want to focus on a specific ethanol blend level. Instead, he said, let the market focus on the environmental benefits, the compression needs of the engines and price.

"All of that has to play out in the marketplace," he said. "We're very confident if we were allowed to do that, then ethanol would be even more competitive as a fuel than it is today. Our goal is to keep making these arguments. We're even willing to reach out to some refiners to see if there is some middle ground we can find with them." 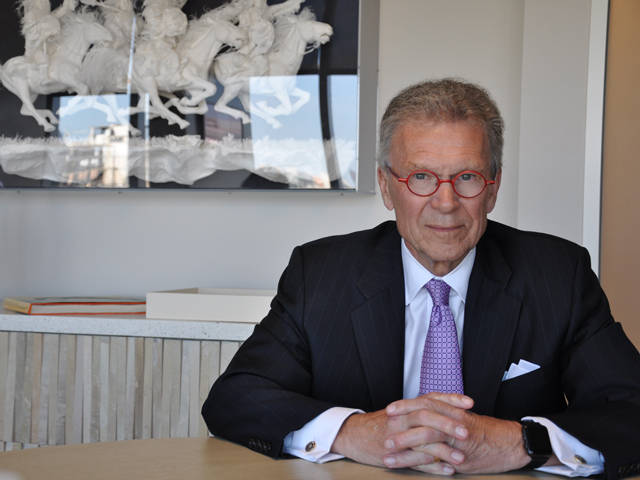