That's basically the only good advice offered after days of talks and congressional hearings as President Donald Trump ramped up the trade battle with China on Thursday by signing an executive order creating as much as $60 billion in new tariffs on high-tech products made in China and restricting Chinese investment in the U.S.

The White House took the action despite an already struggling U.S. farm economy. Farmers have seen their incomes cut in half since 2013 and can't risk losing more demand for commodities in a trade war with China, the largest U.S. agricultural export market, pegged at $21.6 billion in value for 2018.

Testifying before the Senate Finance Committee on Thursday, U.S. Trade Ambassador Robert Lighthizer noted that agriculture is often vulnerable to retaliation, and the farm sector is "even more vulnerable in the current economic environment" facing farmers.

Still, Lighthizer said trade actions are necessary after decades of failed attempts to get China to follow traditional rules of a market economy when it comes to intellectual property and investment.

"We have trade rights we have to defend, and too often farmers end up on the short end of the stick," Lighthizer said, though he added the U.S. has an $800 billion trade deficit, "and we have to balance it."

Trump said when he signed the executive action that it was the first of many he expected to take and that the tariffs "could be about $60 billion," though he added that "that's really just a fraction of what we are talking about." Trump said he's asked the Chinese government to "reduce the trade deficit immediately by $100 billion. That's a lot."

Sen. Pat Roberts, R-Kan., told Lighthizer in the hearing that the senator continues to hear more about the economic challenges in farm country. The U.S. needs to explore and open new markets for farm commodities, not make it more difficult to sell products, Roberts said.

Roberts said Mexico, a top market for both corn and wheat, is now buying more from South America.

"If we continue down this road, we may have to consider some kind of payment to farmers on a case-by-case basis," Roberts said, somewhat half-jokingly suggesting such relief would be called "Trump tariff payments."

Roberts told Lighthizer, "Anything you can give is hope to a bad situation," and added, "We're in a dire fix."

Sen. Charles Grassley, R-Iowa, and Sen. Claire McCaskill, D-Mo., both pointed to specific risks to $14 billion in U.S. soybean exports to China that could be jeopardized by retaliation.

"I must also remind you, Mr. Lighthizer, a state like Iowa stands to lose a lot from retaliation," Grassley said.

"Iowa farmers still remember President Carter's grain embargo," Grassley added. The embargo was 38 years ago, but it is still in the memory of farmers, he said.

Lighthizer responded that he recognized the "conundrum" that trade retaliation causes, but he said it is not possible for the U.S. to avoid taking action just because it could affect soybean growers. "Every time we take a trade action, agriculture is in the cross hairs, and it is something we are very sympathetic to," Lighthizer said.

Still, Lighthizer pushed back on arguments that the administration's actions were haphazard. He explained the approach against China is to target high-tech industries China is developing with a strategy to dominate these markets globally by 2025. Lighthizer pointed to advanced robotics, information technology automated equipment, aerospace technology, as well as agricultural machinery, biopharma and advanced medical products. China has engaged in unfair practices to steal technology in these industries, the ambassador said.

"I don't think it's the president's intent to start a trade war," Lighthizer said. "That's a statement I fundamentally disagree with. To suggest what we are doing is not sophisticated or nuanced is nonsense."

Lighthizer also told senators that the U.S. has tried since the early 1990s to stop China from stealing intellectual property. Such efforts have ranged from smaller tariffs to opening up markets and then a series of talks and dialogues with China on trade.

"We have every one of these so-called dialogues and accomplished absolutely nothing," Lighthizer said, noting the deficit with China continues to grow.

The U.S. Grains Council also said its members were "dismayed" by the latest actions. The council pointed to complications with China regarding distillers dried grains with solubles (DDGS), sorghum, ethanol and corn in recent years.

"If there was any question about the likelihood of retaliation by China after previous actions by the administration to protect domestic manufacturers, that doubt was erased today. American soybean producers oppose this decision by the administration that puts exports of our soybeans to China in jeopardy," said John Heisdorffer, an Iowa farmer and president of the American Soybean Association.

Still, at a farm-policy event on Wednesday, a White House adviser and two trade negotiators in the Trump administration defended the new moves against steel and aluminum, as well as actions against China as necessary to create a fairer trade environment for the U.S.

Ted McKinney, a USDA undersecretary for trade, told people in agriculture to "buckle up" for a rollercoaster ride, but added that President Trump knows agriculture's stance as an industry.

"Keep things in perspective because I think we're going to get there," McKinney said.

Gregg Doud, newly approved at the U.S. Trade Representative's top negotiator on agriculture, said China is already taking advantage of U.S. farmers because China has exceeded its support limits on major commodities by more than $100 billion -- a situation that has already caused the U.S. to bring a trade case. China's stocks in wheat, corn, rice and cotton are so high that they allow China to saturate other markets, and harm U.S. ag exports by at least $3.5 billion last year alone.

"That is depressing prices for every other farmer in the rest of the world," Doud said. "These folks have been breaking the rules for far too long. President Trump has stepped into the breach and said something has to be done about it. And he's absolutely right." 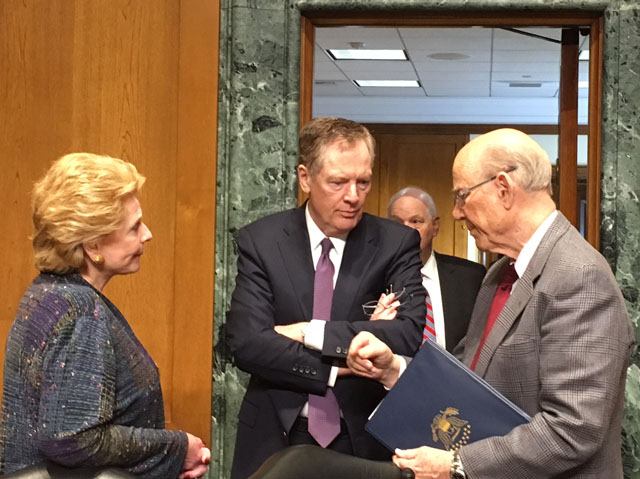