NASHVILLE, Tenn. (DTN) -- Delegates for the American Farm Bureau Federation on Tuesday voted to add more detail to their farm bill policies for commodity programs, dairy and conservation compliance, while also adding language to defend some popular crop insurance policies and voting to increase dues in the national organization.

Given the heightened attention of a visit by President Donald Trump on Monday, the 99th annual convention was widely considered a success by staff and the 7,500 or so AFBF members who attended the convention.

Zippy Duvall, AFBF's president, also was elected unopposed to a second term. Duvall said the resolution session gave Farm Bureau some direction to help navigate various issues in the farm bill debate over the next year as Congress tries to draft and complete a new bill.

"They gave us some flexibility and reassurance to help write this farm bill," Duvall said. "Of course, they reassured and tweaked some areas in cotton and title I for ARC (the Agricultural Risk Program) and some thoughts around the dairy programs."

Delegates voted to improve ARC county yield data by using Risk Management Agency data as the primary source to determine a more accurate county yield, as long as RMA data at the farm level is protected from Freedom of Information Act access.

Farm Bureau also proposed to include a new dairy revenue protection program in the farm bill that would work with the Livestock Gross Margin Program. Further, USDA's Risk Management Agency should expand its programs for dairy with the inclusion of milk as a defined commodity.

AFBF wants a dairy commodity safety net program that gives farmers the option to select either a program that provides protection against a decline in milk prices or a decline in milk margin. The policy proposes increasing the coverage from 4 million pounds to 5 million pounds of milk for all dairy producers and also increasing the catastrophic margin for milk producers as well.

Duvall acknowledged there will be financial challenges ahead for the farm bill, but he added that the farm bill should be viewed as a food security act "and Congress needs to decide what it takes to keep our food supply secure for all Americans, and then go back and figure out what it will cost. If the baseline needs to be broadened, then Congress needs to step up and do their job to make sure our food supply is secure and safe."

Delegates also passed a resolution to increase dues to the national federation by $1 to offset a $1.5 million budget deficit facing the organization. The deficit is partially due to Farm Bureau's membership largely flatlining at about 6 million members. Duvall also said Farm Bureau had lost participation in some income generators through member programs that had gone away. "Those programs contributed heavily to our deficit," Duvall said.

The board of directors proposed a $1 increase in dues to the national organization, starting in 2019, which would generate around $6 million in dues. The proposal to increase the national dues to $5 needed a two-thirds vote to pass and got 85% of the delegate vote, 208 to 50.

While President Trump and congressional negotiators were working Tuesday on how to resolve some pressing immigration issues, Farm Bureau delegates voted not to include a policy to encourage Congress to pass legislation providing legal status for persons currently covered under the Deferred Action for Childhood Arrival (DACA) policy. The motion failed 109 to 184 despite arguments from a New York delegate that children shouldn't be penalized for the actions of their parents.

Duvall said later that AFBF's main immigration focus is to improve the ability to bring in temporary foreign agricultural labor for farmers who need such workers.

"Our main focus when it comes to immigration reform is ag labor," Duvall said. "We're really looking for a sustainable program that our people can use, that would take some the regulation out of it, and some adjustment of status of our skilled workers that we have here, and we did speak to the touch-back status for some future bills we might look at."

Duvall said he did talk with Trump briefly on Monday about farm labor. "I told him as I travel the country there are a lot of important issues facing agriculture, but ag labor is the No. 1 issue that farmers are facing. And his comment to me was we are going to fix that problem. We are going to bring industry back into the country, and they are going to also need workers alongside farmers and ranchers and we are going to need a program in the future where people can flow back and forth to work in this country."

Farm Bureau also voted to require an overhaul of the highly erodible land (sodbuster) and wetland conservation (swampbuster) rules with several provisions, which would include limiting penalties and crop insurance premium subsidy for highly erodible land or wetland to only the subsidy of the field or the tract where the violation occurred. Farm Bureau delegates voted to support severing the requirement of conservation compliance in regard to crop insurance subsidies if sufficient progress in overhauling the sodbuster and swampbuster rules are not met. That language came from North Dakota and South Dakota delegates.

Scott VanderWal, president of South Dakota Farm Bureau and national vice president, said conservation compliance and swampbuster rules are a major issue in the Prairie Pothole region. Farmers do not believe regulations are being applied the way Congress intended.

Duvall noted policy still supports conservation compliance, but changes are needed. He said he has worked with the South Dakota and North Dakota chapters to bring some attention to this issue at USDA. "The enforcement in those areas is not consistent across the board," Duvall said. "We have talked to the secretary about bringing consistency there and clarity to what the rules and regulations really are."

In another conservation issue, AFBF opposed any increase in the national average cap for the Conservation Reserve Program unless additional acres are tied to continuous signup practices and to the most environmentally sensitive ground.

And though Farm Bureau members showed strong support for Trump, they showed a little leeriness about his trade agenda. Delegates voted to oppose any efforts to put sunset provisions in U.S. free-trade agreements.

Delegates also voted to oppose food labels calling plant-based beverages "milk" and to oppose calling lab-produced proteins "meat." Along with that, they opposed the use of non-GMO labels on products in which there are no current GMO alternatives.

In an area of federal spending, AFBF also now supports the ability of Congress to earmark discretionary funds for specific projects if the earmarks are done in a transparent way that identified the purpose and intended beneficiaries. That language was notable because, just Tuesday, President Trump also suggested in a meeting with members of Congress that they should bring back earmarks. 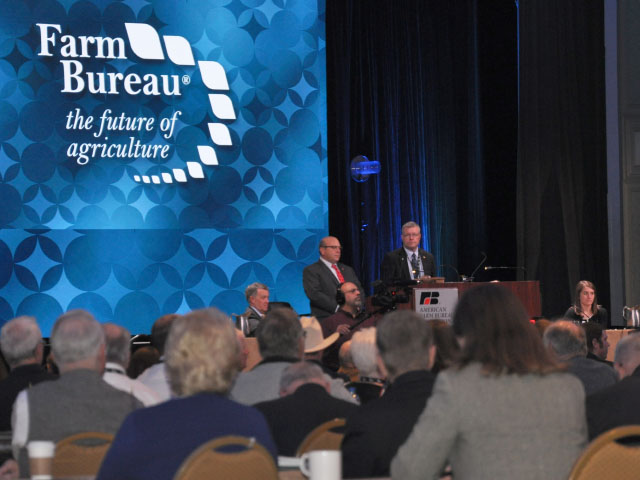