NASHVILLE, Tenn. (DTN) -- Georgia farmer Zippy Duvall, president of the American Farm Bureau Federation, heaped a load of praise on President Donald Trump and his administration on Sunday in his annual speech to Farm Bureau members.

Still, Duvall also expressed concern about the overall state of the agricultural economy and acknowledged problems with the Trump administration's current focus on trade talks and immigration policies.

Trump is scheduled to speak Monday afternoon at AFBF's convention in Nashville. He will be the first president to address the group's annual convention since President George H.W. Bush in 1992.

Despite strong support for President Trump by Farm Bureau members, the current trade renegotiations with the North American Free Trade Agreement, and lack of other new trade talks, are among the biggest concerns among leaders of Farm Bureau and other groups at AFBF's meeting. "I Support NAFTA" buttons were on every chair in the ballroom for Duvall's speech on Sunday.

Responding to a question from DTN, Duvall said farmers recognize NAFTA needs to be modernized, while ensuring there is no harm done to agriculture. But Duvall said farmers are ready to move forward on other bilateral trade deals. He acknowledged concern over the fact the European Union is rapidly advancing in bilateral trade talks currently with Japan, Mexico and other major U.S. trading partners.

"It's just crucially important," Duvall said. "Other countries aren't standing still. The TPP-11 group (Trans Pacific Partnership) are moving forward and we think America ought to be the leader and not the follower. We're going to encourage the president to get out there and make sure we are part of those new agreements that are going to come in the future."

Duvall said Trump is a businessman who recognizes American businesses need to export to the more than 95% of the global population outside the U.S. "He has his way of going about negotiating, and he has the best interests of the American people and American agriculture at heart."

Before Trump's speech on Monday, Duvall said he expects to get a few minutes with the president and will thank Trump for the people he has put in place and for tax reform, and will emphasize Farm Bureau's desire to see some of the temporary tax provisions become permanent in law. Duvall said he will then talk to the president about the biggest issue facing agriculture now, which Duvall said is labor. "It is the biggest limiting factor we have on our farms today," Duvall said.

After that, Duvall said he would tell Trump "that everyone in the room is a little nervous about trade. If he can share a word or two, give them something to hang on and some confidence about what we're doing because none of us really know what's going on behind closed doors and what they are negotiating."

In one more effort to get the message across to President Trump, Duvall took time to get Farm Bureau members to pull out their cellphones and send more than 1,000 social media imprints to the president to support open trade. "I would like every single person in this hall to help to tell the president that trade agreements benefit America's farmers and ranchers," Duvall said.

Duvall also added that, given the poor agricultural economy, farmers can't afford to lose any foreign markets. Instead, more markets need to be opened.

"Trade should not -- should not -- be a dirty word, because without those global markets, our already-depressed farm economy would go down even more."

"President Trump has put a team in place that is getting good things done for farmers and ranchers," Duvall said.

Duvall added that AFBF is a nonpartisan organization, but the Trump administration has opened the door for farmers and ranchers from the first day in office, citing the tractor brigade that was in the inauguration parade last year.

"And there's no question that the change in administration has transformed the opportunity we have to implement the policies of this great organization," Duvall said.

Duvall cited the engagement of farmers in helping get tax reform passed. He pointed to the 20% deduction on business income, the doubling of the estate-tax exemption and preservation of other tax credits, as well as lowering most overall individual rates.

The AFBF president said the EPA Clean Water Act regulation on waters of the U.S. was "probably the biggest challenge we faced in recent years," though the regulation was never implemented because of court cases. Duvall said the regulation would have regulated how farmers use their land, but also whether they could farm at all.

"It treated ditches and even potholes the same as flowing rivers," he said. "That rule invited the feds onto our fields to essentially take over management of our farms and ranches."

Duvall said farmers are on their way to ditching the rule. EPA is planning to rewrite the rule in a way that focuses more on navigable waters, and the new proposal is expected to come out sometime this year.

Duvall praised EPA Administrator Scott Pruitt, saying he had spoken to AFBF's Advocacy Conference and gotten two standing ovations. "We appreciate the work that the administrator is doing to bring common sense back to environmental stewardship."

Duvall also praised Interior Secretary Ryan Zinke's work, including reducing the size of two national monuments that had been expanded by the Obama administration. Duvall called Obama's expansion of the Utah monuments as an "abuse of power -- one that denied farmers and ranchers access to grazing land and water resources."

Agriculture Secretary Sonny Perdue is a farmer and former governor, "and he is no stranger to regulatory reform." Duvall also said Perdue is an asset for farmers on trade, and he pointed to the first undersecretary for trade at USDA, Ted McKinney, to work on opening up trade.

"They are making sure the president knows how critical trade is to farmers and ranchers," Duvall said. "But I have to let you in on a little secret. I think this president understands that."

Duvall also plugged the farm bill for 2018, saying it shouldn't be looked at so much as just a safety net for farmers, but a food security bill for everyone. Duvall added, however, that farmers are struggling at the moment but would persevere through the tough times with low commodity prices and natural disasters in parts of the country. "These are challenging times for us. The farm economy right now is bad."

Canada's Minister of Agriculture and Agri-Food Lawrence MacAulay also spoke to reporters Sunday and expressed his hope the NAFTA talks would end without disruption to current ag trade among the three countries.

"I have not run into a single person who thinks we should withdraw from NAFTA," MacAulay said. 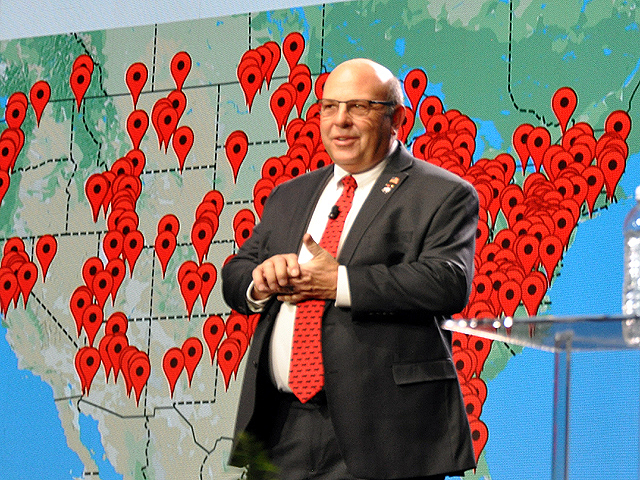