WASHINGTON (DTN) -- Opponents of the House tax-reform bill pointed to the impacts of the budget deficit that could require major cuts to farm programs under current law.

Unless Congress takes other action, the increase in the deficit in the new tax bill would require 100% sequestration of many farm programs including Agriculture Risk Coverage (ARC) and Price Loss Coverage (PLC) in January, the Congressional Budget Office said Tuesday in response to a request for analysis by House Minority Whip Steny Hoyer, D-Md.

The Statutory-Pay-As-You-GO Act of 2010 "requires that new legislation enacted during a term of Congress does not collectively increase estimated deficits," CBO Director Keith Hall wrote in a letter to Hoyer that was also sent to House Ways and Means Committee Chairman Kevin Brady, R-Texas.

The White House Office of Management and Budget keeps a scorecard of the deficit over 10 years, and the implication of enacting a bill with a $1.5 trillion deficit would mean that OMB would add $150 billion to the deficit for 2018 and be required by the law to order sequestration cuts for 2018, Hall explained.

The CBO letter states that, based on the PAYGO law, the White House Office of Budget and Management would have to find between $85 billion to $90 billion in program cuts for 2018.

Congress could apparently avoid the cuts by passing legislation to offset the deficit increase, wave the recording of the bill's impact on the scorecard, or otherwise mitigate or eliminate the implications of the PAYGO law, according to Hall's letter.

Hoyer said in a statement that the analysis "shows the full fiscal impact of the Republican tax bill's massive deficit increases."

"Adding $1.5 trillion in new deficits over a decade would be bad enough, but CBO shows how, under current law, statutory PAYGO will result in the complete elimination of all funding to dozens of mandatory programs next year, from assistance to farmers to border enforcement to student loans, as well as a roughly $25 billion cut to Medicare," Hoyer said.

"This further illustrates the consequences of Republicans' desire to provide huge tax breaks to the wealthiest while raising taxes on 36 million middle-class taxpayers."

"I wrote the statutory PAYGO law when Democrats were in the majority because I believe that Congress has a responsibility not to load the next generation with a massive amount of debt," Hoyer said. "With this tax bill, Republicans are irresponsibly planning to do just that."

"While it is possible to avoid the PAYGO enforcement cuts triggered by their added deficits, Republicans would need Democratic votes to do it, requiring them to abandon their go-it-alone partisan strategy, which is only leading them on a path to failure and to putting our country in danger," he said. "I urge them to abandon their disastrous tax bill and instead work with Democrats on real, bipartisan, permanent tax reform that won't balloon our debt or trigger cuts under PAYGO."

National Farmers Union President Roger Johnson said, "If Congress passes legislation that increases the deficit, they will subsequently be forced to cut federal spending. In the case of the tax bill, current law could require 100% sequestration of all commodity program payments and other farm bill programs."

"Tax cuts for the highest income brackets should absolutely not come at the expense of programs that protect our nation's family farmers and ranchers," Johnson said.

Johnson noted the total available pool in CBO's estimation, between $85 billion to $90 billion, means the sequestration would affect all mandatory spending programs other than Medicare, which includes the Commodity Credit Corporation (CCC).

"The CCC is the second-largest non-exempt mandatory program, after Medicare," Johnson said. "It funds dairy and other farm program payments, including ARC and PLC, both of which are critical for keeping family farmers and ranchers in business during times of economic uncertainty."

"This proposal asks farmers and ranchers to trade any possible tax benefits for the elimination of farm safety net payments, like ARC and PLC," Johnson said. "That would be a disastrous trade. NFU continues to advocate for a simplified, progressive tax code that does not risk programs vital to the livelihoods and well-being of American family farmers and ranchers." 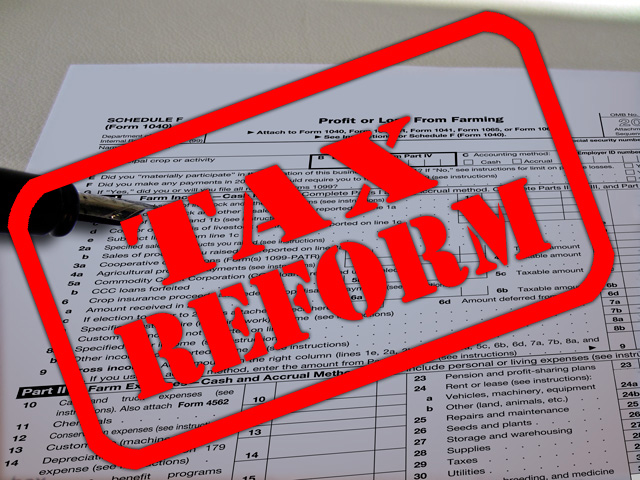