OMAHA (DTN) -- A bill to overhaul the country's agricultural guest-worker program advanced out of the House Judiciary Committee on Wednesday with just a one-vote margin after extensive debate about the impact of a new guest-worker program on farm jobs, but also on the meatpacking and logging industries.

The Agricultural Guestworker Act drafted by Judiciary Committee Chairman Bob Goodlatte, R-Va., passed on a 17-16 vote. The bill would scrap the current H-2A temporary ag worker program and replace it with a new program, dubbed H-2C, that would allow farmers and other employers to bring in 410,000 foreign workers for farm jobs, as well as 40,000 foreign workers for meatpacking plants.

The bill has the support of an array of agricultural groups, including the American Farm Bureau Federation, as well as groups representing dairy, cattle, pork, fruit and vegetable commodities, along with the meat-processing industry.

Still, the immigration bill also has strong opposition from both sides of the political spectrum. Under the bill, the 450,000 visas would increase each year, meaning that within three years, the H-2C program could lead to 1.3 million foreign workers in farming and other related industries.

Unlike H-2A, the bill would allow foreign workers to work in agricultural jobs to stay in the country for up to three years before requiring workers to return home. This would provide more stable labor for farmers, such as dairy producers, who need workers year-round.

Ideally, current farmworkers living in the U.S. illegally would register under the H-2C program and become legal workers. However, Goodlatte modified his original bill and the new version does not offer any pathway for agricultural workers to receive green cards for permanent residency.

The bill also makes a major shift in regulatory oversight of the guest-worker program by moving H-2C out of the Labor Department and into the U.S. Department of Agriculture. USDA would oversee the requests for workers by farmers and other companies, and the approval process. Other enforcement duties for the foreign workers and employers would remain under the Department of Homeland Security.

The bill eliminates some of the onerous provisions of the current H-2A program that farmers have complained about for years. For instance, employers would not have to provide free housing or transportation to job sites. The bill also gets rid of the H-2A local prevailing wage rules, but would require employers to pay a minimum of $8.34 an hour for field workers. Those 40,000 visas for the meatpacking industry would have to pay a minimum of $10.88 an hour.

At 450,000 possible guest workers, the new program would be nearly three times larger than the H-2A program this year. The Department of Labor shows 160,084 temporary H-2A ag jobs around the country were filled in the first nine months of Fiscal Year 2017, more than double the volume from just a few years ago. Georgia, North Carolina, Florida, Washington and California combined for just over 50% of the H-2A requests and positions filled.

Democrats on the Judiciary Committee complained that the bill broadens the definition of agricultural labor to include jobs such as meat processing and logging. Democrats charged the new guest-worker program would effectively pull down the wages in those industries for American workers.

"We are actually in this bill making it easy to pay a very low amount per hour to foreign workers to come in and displace American workers in an area that has no shortage, where the pay is such you can achieve or aspire to a middle-class lifestyle," said Rep. Zoe Lofgren, D-Calif. "Why we would want to bring in hundreds of thousands of foreign workers to displace American workers is beyond me."

Goodlatte disagreed with the notion the bill would undercut wages for American workers. Foreign workers would not agree to come into the U.S. to earn low wages. Those foreign workers also would be allowed to change jobs for better opportunities.

"The prevailing wage is going to be well, well above the minimum wage in almost every circumstance," Goodlatte said.

Regarding poultry processing jobs, Rep. Doug Collins, R-Ga., said there is a chronic shortage of workers already in the industry.

"If we had everybody there and Americans filling these jobs, then this bill would not be necessary," Collins said. He later added, "I don't think the worry here is depressing wages. The wages will continue to be there because you are not going to lose workers, and we don't have that many folks coming in to take these jobs to start with."

Farmers have increasingly struggled to find labor, especially since the federal government and states have tightened enforcement against undocumented workers. The California Farm Bureau released survey results last week stating that farmers and ranchers across the state were facing chronic hiring problems finding qualified and willing workers. Among farmers who hire seasonal employees, 69% stated they faced labor shortages. At the same time, only about 3% of farmers who responded to the survey used the current H-2A program.

"Even though more farmers have tried it, H-2A remains too cumbersome for most. Farmers in California and elsewhere in the country need an improved system to allow people to enter the U.S. legally to work on farms and ranches," said Paul Wenger, president of the California Farm Bureau.

The Judiciary Committee was continuing debate late Wednesday on a related bill that would require all employers in the U.S. to use the E-Verify system when hiring workers. 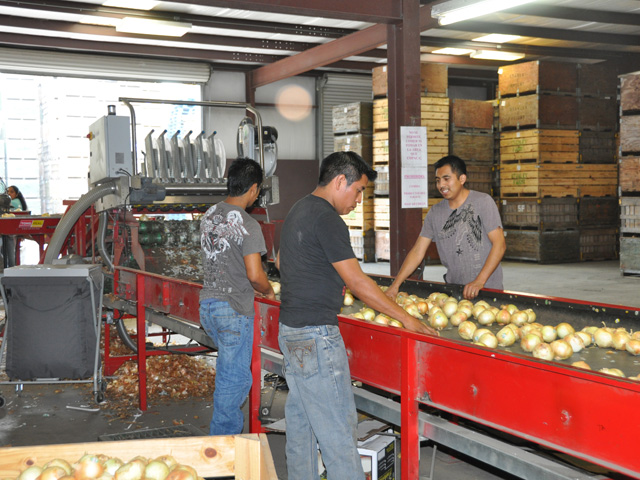