MORGAN, Minn. (DTN) -- While Farmfest is known for its traditional heat and humidity, it was cool, bordering on chilly, on Thursday as 11 members of the House Agriculture Committee heard about a broad array of concerns over the farm bill and rural economy.

The Ag Committee is holding listening sessions across the country during the August break as they plan to craft a farm bill later this year. Lawmakers heard about issues with cotton and peanuts at listening session in Texas on Monday, and lawmakers will hold a similar session in Modesto, California, on Saturday.

The listening sessions give lawmakers a broader perspective as every person talking gets 2 minutes to make a statement and the lawmakers do not ask questions. House Agriculture Committee Chairman Mike Conaway, R-Texas, and Ranking Member Collin Peterson, D-Minn., said they like the format because it is less formal than an official hearing and more people get a chance to share their concerns. More than two dozen people testified Thursday.

Peterson said he and Conaway are committed to getting a farm bill done in 2017, but that may depend on the scoring costs and other issues outside of the committee's control. The House Agriculture Committee is facing a potential $10 billion cut based on the fiscal-year 2018 budget bill that cleared the House. Conaway said he is waiting to see what happens in the Senate and hoping the cut doesn't stand.

"If the $10 billion in cuts that came out of the House bill don't survive the negotiations with the Senate, then we will move forward," Conaway said. "But if it does, we'll meet our goal that was put in the House budget, but let's wait and see if the Senate agrees with us."

Conaway said he thinks the farm bill would advance sometime late in the year or early next year. He added he also has submitted some proposals to the Congressional Budget Office to score for costs, though Conaway declined to offer specifics.

The listening session captured the challenges for lawmakers as nearly everyone stepping up to the mic called for program increases. Organic agriculture, for instance, was a big theme at the listening session. Organic farmers said the National Organic Program needs more funding to manage the $47 billion industry.

Jerry Matzner a dairy farmer near Sauk Centre, Minnesota, said support for the growing organic industry is critical. Organic sales are experiencing 8% annual growth while USDA's National Organic Program, which regulates the industry, is not receiving funds to keep up with the oversight needs.

"We ask for an increase in the next farm bill -- $15 million with 10% growth," Matzner said. He added that organic farmers want to see tighter controls to keep integrity. Don't change production standards, he said, but tighter enforcement is needed to stop fraudulent imported grain from dragging down market prices for domestic farmers.

"This price decrease has cost our farm $160,000 alone," he said in pointing to price declines because of fraudulent imported grain.

One area that jumped out to Peterson was some concern about farmers potentially manipulating the crop insurance program through organics. A Minnesota farmer told the committee farmers are getting alfalfa land certified for organic production, then filing claims for crop insurance at $9 a bushel by using the average county yield to make their claim. Either the farmers aren't using effective organic practices to produce a crop or the ground itself is not suited for corn. Either way, they are manipulating the crop-insurance program, Peterson said.

"With the prices they can get for organic, they are actually farming the crop insurance system," Peterson said. "I'm not sure everybody is doing that, but at least some of them are doing it."

Peterson stressed he supports organic agriculture, and that is not the issue here. "But we can't have people working the system," he said.

Conaway said there is a similar issue in the South of people trying to grow organic cotton on ground that won't produce cotton at all. "Those issues about farming the crop insurance program have got to be dealt with severely because we can't have that going on," Conaway said.

Rep. Kevin Cramer, R-N.D., said he was concerned about the lack of enforcement of organic standards. "To me, that should not have to go on long. It's a simple fix in my view. Test it and if it doesn't meet the test and if it happens twice, don't let it in for awhile."

Dairy farmers repeatedly highlighted that the Margin Protection Program is not working. Further, dairy farmers can sign up for MPP or insurance, but not both, even though crop farmers can use both the commodity program and crop insurance.

"The MPP needs some changes to it," said David Buck, president of Minnesota Milk Producers of Goodhue, Minnesota. Buck added that another problem for dairy farmers is labor. On his own farm, he has cut back milking from three times to twice a day because of the lack of workers. He said changes are needed to the H2A guest-worker program so it can work for dairy farmers.

"The labor issue is another one and it's one our staff hears the most about," Buck said. "It's very difficult to find people to work."

Steve Schlangen, chairman of the board of Associated Milk Producers Inc. and a dairy farmer from Albany, Minnesota, said dairy farmers are not looking for a bailout but "we're seeking a toolbox of options to manage risk." Schlangen said changes are needed to insurance to give the Risk Management Agency more latitude to provide insurance products for dairy producers. He also criticized the lack of payments from the MPP.

"For dairy farmers to utilize the program, they need a dairy feed-cost program that more effectively reflects the costs of production," Schlangen said.

Another farmer also called on House members to support legislation that would ensure only dairy products from animals be called "milk."

Crop insurance has largely been treated as a sacred cow, but there was a repeated message by a handful of people who spoke supporting a cap on crop insurance premiums. These people, including a county commissioner, said the unlimited premium subsidies favored large farmers at the expense of smaller producers and beginning farmers.

Noah Hultgren, former president of the Minnesota Corn Growers Association who farmers near Willmar, Minnesota, stressed the importance of crop insurance. "We have three families that derive income from our farm, and if he did not have crop insurance, we would not survive," he said, citing some weather problems his farm has faced this year.

Paap was also among those calling on Congress to support the trade title in the farm bill as well.

"The way to raise low prices is to raise demand. Trade is not a big part of the farm bill, but it's an important part," Paap said.

Paap and Gary Wertish, president of the Minnesota Farmers Union, both called on Congress to keep nutrition programs in the farm bill as well. Wertish told lawmakers that in 16 recent rural discussions around the state, "the nutrition title came up in every one of our meetings."

Wertish later told DTN that he doesn't think the farm bill should be held hostage to budget issues. "Rural America played a big role in this recent election, and we don't think it's right to try to balance the budget on the backs of rural America," Wertish said. "The needs are out there, there is no doubt about that."

Wertish also called on lawmakers to work together on health care, calling it "the elephant in the room." Wertish said most farmers have to rely on the individual market, which is facing increasing insurance premiums. "That has to be addressed too, and I encourage them to go back to Washington, quit pointing fingers at each other, and sit down and work on it," he said.

Harold Wolle, president of the Minnesota Corn Growers Association, weighed in on the Conservation Reserve Program, telling congressmen the current 24-million-acre cap is limiting the marginal ground that can go into the program.

"I sure would like to see that raised substantially higher so we can get the lands that need to be in that program in it," Wolle said. "I think we can raise the acres and lower the rental rate."

Several members of the Land Stewardship Project testified about conservation programs, as well as crop insurance caps. The group's members also did not want to see loan guarantees for farmers raised, arguing the boosts would only allow bankers to increase loans to larger farmers who do not need the extra support.

"I would just for once like to see a farm bill where just once the end result is more family farmers," said James Kanne, who farms near Franklin, Minnesota. 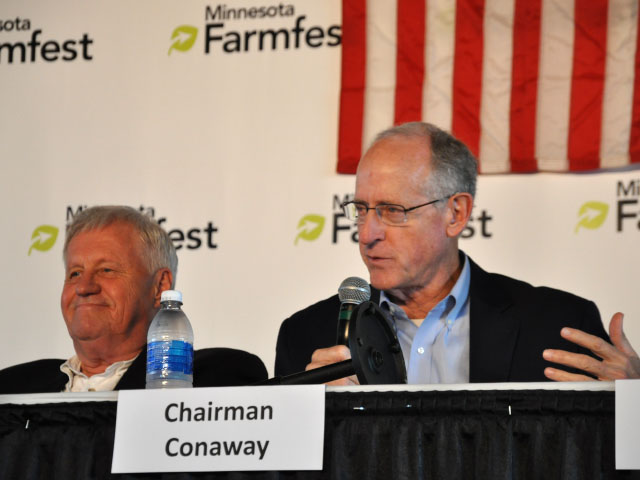