OMAHA (DTN) -- Demonstrating increased communication with his Mexican counterpart, U.S. Agriculture Secretary Sonny Perdue has been in the Yucatan Peninsula over the last couple of days touring a pork processing facility and talking trade.

Perdue spoke with reporters Friday about some aspects of his trip and about talks with Mexican Agriculture Secretary Pepe Calzada. Perdue said the talks offered "a good basis of trust and respect and mutual candor."

Tensions have grown in the agricultural trade relationship with Mexico ever since President Donald Trump began pressuring both Canada and Mexico to renegotiate the North American Free Trade Agreement. As a result, Mexican lawmakers and grain buyers have increasingly talked since the beginning of the year about striking up more trade with South American countries such as Brazil and Argentina. Perdue downplayed some of that saber-rattling on Friday, pointing to the integration of agricultural supply management between the U.S. and Mexico.

"I did not get any indication they are seriously considering that," Perdue said of Mexico turning south for commodities. "Obviously when there's the threat of lack of supply for your nation, we would consider doing the same thing. If someone were considering maybe withdrawing or cutting off negotiations of a product we depended on for our economy and our industry of further value-added processing of pork or whatever, then we would look for alternative supplies. That's just what we have to do to protect our own people."

Still, Perdue stressed the U.S. has too many advantages for Mexico to seriously make such a change in the grain trade. "I think we have such productive and logistical advantages from the U.S. to Mexico, I think while they may talk about that -- they may act like they are having conversations -- we have a cornerstore location for their supply and we will continue to take advantage of that, not only from the competitiveness and the productive capacity of our grain and bean growers, but the logistics of rail and water," Perdue said, adding he would later tour a port to watch a ship from New Orleans unload in the Yucatan.

According to USDA's weekly export sales report, U.S. corn exports to Mexico are up 4% for the 2016-17 marketing year starting last Sept. 1, hitting 11.852 million metric tons so far this year.

Perdue also acknowledged that a NAFTA renegotiation will continue to have winners and losers, even in the agricultural sector. When asked about what could be done about "dumping" of Mexican fruit and vegetables into the U.S., Perdue noted not all crops have benefited equally.

"Some feel disadvantaged and we understand that. Most of that, though, rises from the complementary aspect of our growing seasons and we also have to recognize that. Certainly there is some overlap of those seasons and areas of Florida, south Florida, our southern latitudes there, that conflict with the growing season of Mexico and we will have to address those individually," the secretary said.

Perdue also noted he heard objections in Mexico from corn and soybean growers over imports from the U.S. "Our statement was when you have a NAFTA negotiation, you can't arbitrarily select one sector or the other. We can, once we have the sanitary and phytosanitary provisions -- the equivalence of safety -- then we have to recognize and respect the agreement.

"While we understand not all sectors will benefit uniformly, that's unfortunately the problem we have with a comprehensive agreement," Perdue said.

The secretary added that he would be open to finding ways to mitigate the concerns of U.S. fruit and vegetable producers, especially if they had some ideas to offer.

When asked about the shortage of U.S. farm workers, Perdue also noted that is somewhat out of the purview of the agriculture secretaries, but the topic did come up in discussions with Calzada.

Perdue said the U.S. is working to update its guest-worker program, which would provide Mexican citizens more opportunity to work in the U.S., then come back home to their families. Still, Perdue acknowledged he had no details on how that would work and also noted such discussion is being handled by the presidents of the U.S. and Mexico, as well as the Department of Homeland Security and the State Department. Perdue said he still would try to provide some guidelines to others in the Trump administration because farmers look to USDA to provide guidance on such matters.

"We're looking to do that, but that is not an area that would be involved in NAFTA renegotiations," Perdue said.

The secretary also stressed that while U.S. agriculture has largely done well under NAFTA, "U.S. manufacturing has not and the president is very rightly concerned about that."

The problem, Perdue said, is that agriculture is often the first sector hit with retaliatory measures when there is a major trade dispute. He is going to continue stressing that concern with U.S. trade negotiators and other cabinet officials.

"Our goal, first of all, is to do no harm in the agricultural sectors. We think not only the farming production, but manufacturing capacity of jobs in the U.S. could be hurt," Perdue said. 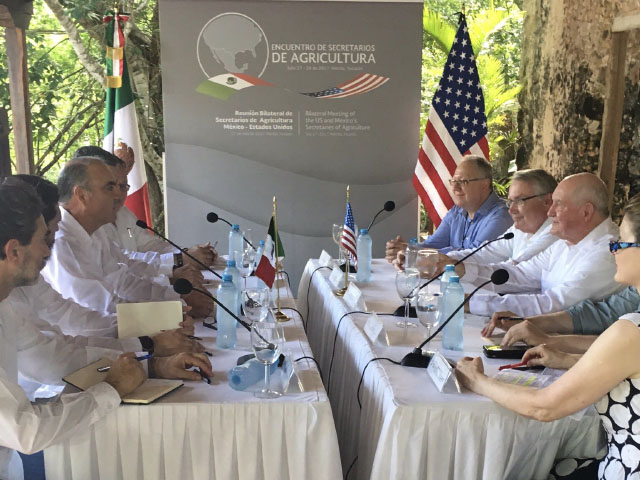