WASHINGTON (DTN) -- Early testimony from agricultural industries Tuesday on the future of the North American Free Trade Agreement reflected an array of views on the impact of the trade deal and the Trump administration's move to renegotiate NAFTA.

Fruit and vegetable farmers say their industry is being decimated by a growing flood of cheap Mexican imports, while the grain industry sees uncertainty potentially hurting demand. The cattle industry, meanwhile, remains bitterly divided over country-of-origin labeling for meat, which Canada and Mexico worked to defeat.

Farm groups were among the first to testify on NAFTA before the U.S. Trade Representative's staff and other federal agencies, which scheduled three days of hearings on the trade deal.

While industry groups pushed for a more rapid response to settle disputes over specific shipments, grain and commodity groups stressed almost as a mantra that any changes to NAFTA should "do no harm."

Chip Councell, a Maryland farmer representing the U.S. Grains Council, testified that he hedged nearly 100% of his expected 2017 corn crop because of worries about talk earlier this spring that the U.S. could pull out of NAFTA, which would destabilize the flow of corn to Mexico.

"When the talk of pulling out of NAFTA came about, prices were at about $4, which is close to our cost of production," Councell told DTN after testifying. "In our minds, with Mexico as our top customer, if that market gets disrupted, other markets around the world will get disrupted. So we thought the smart thing for us to do was to cover our bases. So through forward contracting, hedges and options, we covered just about 100% of our anticipated production.

Councell has gone to Mexico twice this spring to meet with feed millers and livestock producers who buy as much as 80% of the corn exported there. These industries expanded over the past two decades in Mexico by relying on just-in-time grain shipments from the U.S. Now, Mexico is diversifying its corn imports. Councell said he understands Mexico will import corn in August and September from South America.

"This may sound minor, but it is a sea-change happening in our industry now," Councell said. He later added, "Quite honestly, as a businessman, I don't blame them. They referred to it as Plan B."

U.S. corn has duty-free access to both Canada and Mexico. The two countries accounted for $2.6 billion in U.S. corn exports last year. Kevin Skunes, a North Dakota farmer and a vice president of the National Corn Growers Association, said it is important to maintain that duty-free access and expand the sale of corn in all forms.

"We must not jeopardize the existing market access," Skunes said.

Skunes added that Mexico also is increasing blended ethanol to 10% levels, or E10, which could be a boon for U.S. ethanol exports down the line as well.

Regarding wheat, U.S. wheat leaders said the biggest ongoing NAFTA-related problem is with Canada and its grading system that dubs imported wheat as "feed-grade" even though the wheat may be the same as Canadian grain. Chandler Goule, chief executive officer of the National Association of Wheat Growers, said farmers in several Northern Plains states lose value on a crop that could be the same quality as a wheat crop grown just across the border in Canada.

"This is a clear violation of the WTO obligations," Goule said.

Goule said the Canadian wheat industry supports fixing this grading problem, but clarity could be added to a trade deal.

Goule also noted Mexico is also diversifying its supplies of wheat. While Mexico imported more than 100 million bushels of U.S. wheat last year, as much as 25% of Mexico's imported wheat came from Europe or the Black Sea region as well.

Representatives from the Florida fruit and vegetable industry said several changes are needed or Mexico will eventually control the supply of produce in the U.S.

Richard Bowman, director of farming for J&J Family of Farms, told federal representatives that much more needs to be done to stop the dumping of cheap Mexican fruits and vegetables into the U.S. market. J&J has more than 14,000 acres across several states, Canada and Mexico. Florida sales are $70 million, and total sales are $135 million. Bowman said U.S. producers face higher land, capital and regulatory costs than Mexico while labor can be 10 times cheaper there.

"The American produce grower will cease to exist unless current laws are enforced," Bowman said, adding that produce is now coming into the U.S. cheaper than it takes to grow it. "This practice has been going on for years and must be stopped to protect the U.S. farmers."

Mexico's explosive growth in ag shipments to the U.S. has had a profound impact on Florida growers. U.S. tomato acreage, for instance, has been cut by 25% under NAFTA while Mexico's production has increased 230%. Mexico is heavily subsidizing its fruit and vegetable production. Mike Stuart, president of the Florida Fruit & Vegetable Association, called on U.S. officials to dig into the details of those support levels.

Before NAFTA, Bowman said, a vegetable farmer could count on making good money at least once every four years. "Under this new model, we can't survive," he said. "When we are dumped on like we are, we are going to go broke, and the American consumer is going to have to rely on Mexican imports for produce."

Richard Owen, vice president of the Produce Marketing Association, countered the Mexico-dump arguments by saying fruit, vegetable and tree nut production has grown in the U.S. since NAFTA went into effect. Consumers also are buying cheaper products. Further, consumers are able to get more access to fresh fruits and vegetables year-round.

"A lot of the imports are driven by consumer demand and having produce year-round in the marketplace," Owen said.

IT'S COOL AGAIN, OR NOT

That wasn't the last time the topic came up. In a hearing panel built around the beef industry, William Westman of the North American Meat Institute said, "The NAFTA market for our industry is essentially integrated." Westman also suggested trade negotiators should avoid any new talk of COOL.

Westman added that the meat industry would like to see duty-free poultry exports to Canada, as well as maintaining other existing duty-free tariffs on beef and pork.

Westman also said a joint organization is needed under NAFTA to review food-safety threats and validate best-management practices. Further, meat inspection equivalency in NAFTA also could avoid the need for re-inspection at port of entry.

Kevin Kester, a California rancher representing the National Cattlemen's Beef Association, cautioned against revising COOL. Kester argued Canada and Mexico already won a ruling at the World Trade Organization and implied the two countries still have the ability to retaliate against the U.S.

Kenny Graner, president of the U.S. Cattlemen's Association and a rancher from Mandan, North Dakota, added that, "The U.S. imports far more cattle from Canada and Mexico than we send to them." He said remedies are needed to deal with that trade imbalance. Graner also added that both producers and consumers want accurate origin labels.

The Trump administration is seeking to push public comment, hearings and congressional consultation through the summer to begin potential renegotiation talks as quickly Aug. 16.

The hearings will continue through Thursday. 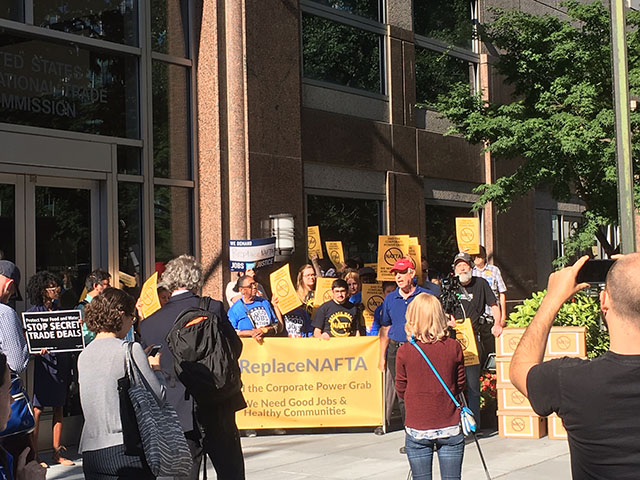