Editor's note: This story has been updated regarding the Rural Development assistant secretary position.

OMAHA (DTN) -- Agriculture Secretary Sonny Perdue indicated Wednesday that a boost in the farm safety net for cotton producers likely will have to wait until the next farm bill is completed, despite encouragement from members of the House Agriculture Committee for Perdue to take action.

"The problem is I don't want to give false hope because my options are limited," Perdue told the committee in a livestreamed hearing.

In his first hearing as a cabinet secretary, Perdue testified for more than three hours Wednesday before the committee on a whole range of topics as lawmakers quizzed Perdue on cotton, trade, USDA reorganization, proposed budget cuts and animal disease outbreaks on down to what the humane treatment standards ought to be for the Tennessee walking horse.

The cotton industry voluntarily withdrew from commodity programs in the 2014 farm bill for a county-based insurance program, STAX, that hasn't worked out as well as expected. Cotton groups started clamoring to reestablish a farm-program safety net when cotton prices began falling dramatically just a year after the farm bill went into effect.

"The best thing is that cotton prices continue upward," Perdue told the committee. "That's the ultimate solution. The good news is supply and demand is improving with more consumption than production recently. So all of those are good news, but that doesn't necessarily negate the fact that producers are already hurting."

House Agriculture Committee Chairman Mike Conaway, R-Texas, repeatedly used his time to criticize a pair of Democrats on the Senate Agriculture Committee for "stabbing America's cotton farmers in the back" by trying to also add a dairy program into the fiscal-year 2017 funding bill that eventually caused appropriators to take out a fix for the cotton program.

Former Agriculture Secretary Tom Vilsack had refused to designate cottonseed as an "other oilseed," which would have allowed cotton producers to sign up for the Price Loss Coverage program even though cotton-state lawmakers insisted Vilsack had such authority. Vilsack instead came up with about $300 million in one-time funds to help support cotton gins.

The cotton industry and others believed Perdue, a former Georgia governor, would step in and make that oilseed designation. Yet Perdue repeatedly told lawmakers that he is limited in how he can help cotton producers.

"We can look for a resolution in the '18 farm bill, as you indicated," Perdue told Conaway.

Reps. Rick Crawford, R-Ark.; Trent Kelly, R-Miss.; and Jodey Arrington, R-Texas, each called on Perdue to do all he can to reestablish cotton as a crop eligible for commodity payments. Crawford said, "We're all in this together. Cotton producers need relief and they need it yesterday."

Perdue added he was pleased the National Cotton Council had come up with a "budget neutral" policy change for that 2017 budget even if it was not approved. Perdue then reiterated that the outcome makes it hard for him to use secretarial authority to create a program for cottonseed. "The latest budget issue was a tough slug for us because it limits our opportunities, it limits my ability extremely there," Perdue said.

Kelly said he disagreed with Vilsack's interpretation of the law and called on Perdue to reassess the possibility of designating cottonseed as an other oilseed. Perdue acknowledged cotton producers believe the secretary has that authority, but the secretary added, "As a non-lawyer, I have to rely on my general counsel in that area and will do so."

Rep. Collin Peterson, D-Minn., also told Perdue he supports a fix for the cotton industry as well if Perdue can do so.

Perdue got several comments of praise about elements of USDA's reorganization that creates an undersecretary for trade, who has yet to be named. Perdue told lawmakers, "We've got to sell our way out of this supply-and-demand situation that is depressing prices in the U.S. now, and that's what we're going to do."

"We believe the undersecretary of trade will be on everyone's front door as often as can be," Perdue said.

The secretary also told lawmakers that bringing together the Farm Service Agency and Natural Resources Conservation service under the same undersecretary will allow more coordination, including tying staff from the agencies into the same computer system. Having the two agencies together at an office ensures there are more USDA staffers who can help farmers and ranchers rather than saying "That's not my job" when a customer walks in, Perdue said.

"All we're trying to do is bring the family together so they can better serve that same customer," Perdue said.

There was consternation by some congressmen over the removal of the undersecretary for Rural Development. Perdue said Rural Development would still have a confirmed "assistant secretary" who would report to Perdue. "This mission is not going to diminish whatsoever," Perdue said.

House Ag Committee members are giving a lot of weight to the possibility of creating a vaccine bank to stem the risks of an outbreak such as foot-and-mouth disease. The U.S. has not had FMD since 1929, but an outbreak would have devastating repercussions on markets, said Rep. Steve King, R-Iowa.

"It's the worst calamity we can imagine as far as a biosecurity issue is concerned," King said.

Perdue agreed that a vaccine bank is like insurance that can reduce the risks of a costly disease outbreak. Perdue earlier told Peterson that a vaccine bank would alleviate some of the risks to market confidence that can happen with an out-of-control outbreak. "It damages the market, not just for that period of time, but it gives people a loss of confidence about safety here in the U.S.," Perdue said.

During the H5N2 bird flu outbreak, trading partners became as reluctant about U.S. producers using a vaccine as the actual bird flu itself. Peterson said USDA should start working with trading partners to ease concerns about a vaccine before an outbreak actually occurs. Perdue agreed, responding with a farm analogy: "When the mule's out of the gate, it's too late to close the gate." 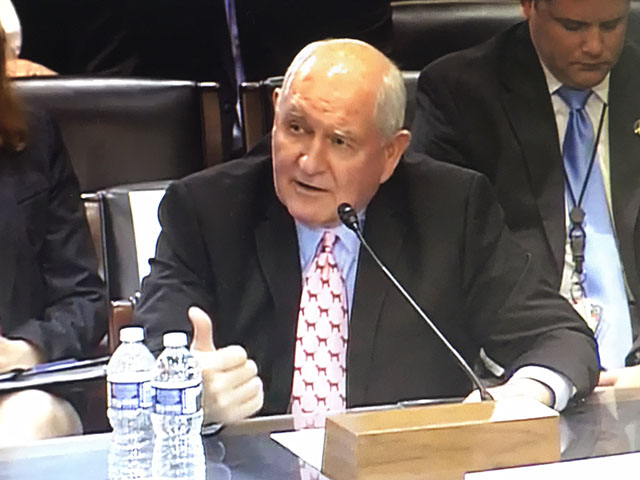