MALVERN, Iowa (DTN) -- Iowa Sen. Joni Ernst told cattle producers she has her own concerns about the Trump administration's trade agenda as producers highlighted topics they would like to see addressed in the next farm bill.

Ernst, a first-term Republican, told DTN she expects a quick vote on USDA Secretary nominee Sonny Perdue on Monday when senators return to Washington. Ernst said that, unlike for nominees for other cabinet posts, Democrats had agreed to waive the 30-hour debate and go right into a vote to confirm Perdue. "That's the first vote we will take when we get back to Washington, D.C.," she said.

Sitting down with local cattle producers in southwest Iowa on Wednesday, Ernst expressed concern about renegotiating the North American Free Trade Agreement. She noted NAFTA "has been very beneficial" for Iowa, mainly due to agricultural exports. Farm-state senators want to encourage the Trump administration when it comes to agriculture, "for lack of a better term, not throwing agriculture under the bus."

Some bilateral trade deals likely can be worked out, but they won't come quickly given that President Donald Trump's full trade team isn't in place. That requires getting Perdue and U.S. Trade Representative nominee Robert Lighthizer on the job. Ernst told the cattle producers she has concerns about Lighthizer's knowledge and background when it comes to agricultural trade. Lighthizer is more comfortable dealing with manufacturing issues, she said.

"I will just be very blunt about this," Ernst said. "I don't know he's as well-informed about agriculture as I think he should be in promoting those products overseas. So we will have to be vigilant and make sure that is top-line when he is engaging in trade. We will have to make sure the people working under him know how important this is for us."

Producers told the senator they were concerned about the state of international trade as well. Will Frazee, a local cattle feeder near Emerson, Iowa, reminded the senator that exports amount to $250-$275 per head of cattle right now. "We would like to increase that, of course, but we don't want to lose what we have, either," Frazee said.

Regarding the farm bill, price discovery was raised as an issue by David Trowbridge, manager of Gregory Feedlots Inc. in Tabor, Iowa. Trowbridge said the Mandatory Price Reporting program is important for cattle feeders, but more transparency is needed regarding larger packer trade and prices from feed yards in the southwest.

"We need to look at that and get some more transparency in that program" Trowbridge said.

Ernst agreed, indicating she likely isn't with her Senate colleague on a ban. "I do think there is probably a different avenue we can take," she said.

Will Longinaker, a younger farmer and cattle producer from Randolph, Iowa, told the senator that younger producers such as himself are struggling to compete for acreage. He was concerned about acres going into the Conservation Reserve Program, given higher rental rates compared to lower commodity prices. Longinaker said landlords are putting land into CRP that should be in production.

"I know that maybe not more regulation, but a closer look is needed for land going into CRP that would help younger producers have an opportunity to find acres," Longinaker said.

CRP is drawing a lot of attention with suggestions to raise the 24-million-acre program cap, but Ernst said Longinaker's views were "spot on." CRP, she said, needs to go back to its intent of protecting land from soil erosion and degradation. CRP was not meant to be a retirement program. Ernst said the number of acres put into the program should be examined, as should the requirements for those acres.

"We have seen whole farms put into CRP," Ernst said. "And that's a nice retirement program for somebody, but that's not what it was intended to do."

Jim Gregory, owner of Gregory Feedlots, told the senator she was "dead on" when it came to CRP. Gregory said the program should be changed to allow for grazing, perhaps with a reduced payment, as a way to keep some land in pasture that shouldn't be planted into crops anyway.

"We have got to figure out a way to keep it in grass, but maybe they can have some livestock on it," Gregory said. "Pay them accordingly."

Others at the event talked about protecting crop insurance for farmers and the need to address how agencies such as the Army Corps of Engineers balance the needs of people versus endangered species. Ernst noted that was a big concern for farmers along the Missouri River bottom now battling the Corps over levee issues.

Ernst told DTN briefly afterward that the biggest topic she has heard in most farm bill discussions around Iowa is the need to protect crop insurance and keep it in the farm bill. Ernst added that the House is moving more quickly on farm bill hearings and work as the Senate will be tied up dealing with a lot more confirmations and nominees for Trump administration posts in the coming months.

Ernst also briefly touched on President Trump's budget proposal, indicating she wasn't certain about the prospects of some proposed cuts. "Understanding what the president proposed in his initial budget is maybe not reflective of what we'll end up doing in Congress," she said. 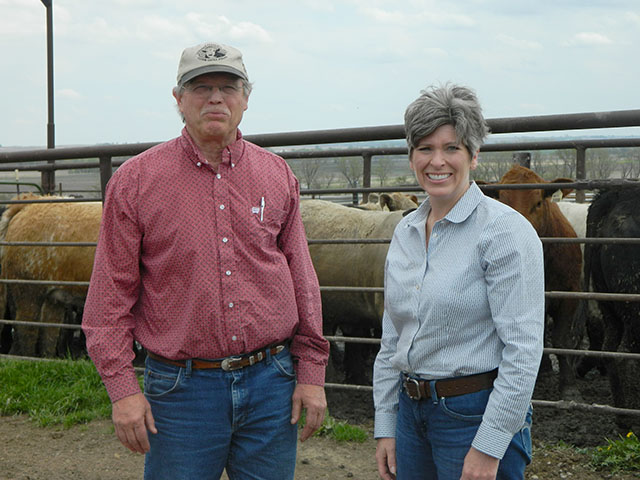